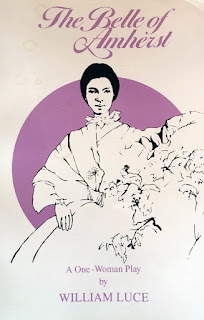 Palm Beach Dramaworks, which is known as one of the leading regional theatres in the country, will now bring its professionalism to the world.  During the pandemic its stage has been ghost lit, limiting productions to professional Zoom readings but that is going to change with their upcoming coproduction of The Belle of Amherst.

This has been a vision of Palm Beach Dramaworks Producing Artistic Director William Hayes and Actors’ Playhouse Artistic Director David Arisco, joining forces on a virtual coproduction of William Luce’s one-woman play based on the life of Emily Dickinson.  Margery Lowe portrays the enigmatic poet and Hayes will direct.  This fully staged, costumed show will be filmed on PBD’s main stage, without the presence of an audience, and will be streamed from April 2-6.

The sudden surfacing of popular interest in Emily Dickinson is reminiscent of decades of relative obscurity of Jane Austen, and then her gradual emergence as an important literary figure and now fully embraced by popular culture as well.  Dickinson is acknowledged as one of the most important American poets of the 19th century with a style connecting the romantic and modern era.  The poet’s growing popularity has recently been adopted by film and TV productions depicting aspects or imagined aspects of her life.

But first, there was William Luce’s 1976 The Belle of Amherst, in which he comingles her letters and poems and creates a moving Dickinsonian text which was in part inspired by one of the leading actors of our times, Julie Harris, who then played by her on Broadway.  It is a high bar to clear.

Luckily for us, we have one of the great actors in South Florida to perform the role, Margery Lowe, who has already portrayed “another” Emily in Joseph McDonough’s world premiere of the comic fantasia Edgar and Emily at Palm Beach Dramaworks in 2018.

“Margery is a lovely actress, and she has great warmth onstage,” said Arisco. “She’s an interesting combination of maturity and youthfulness in her performances, so she’s a terrific choice.” Hayes added, “Having seen Marge embody Dickinson in a very different play, and having developed a professional bond over 15 years and numerous productions, I know she has the range, the skill set, and the artistry to pull this off brilliantly.”

It also helps that she is a doppelganger for the great poet!

This is not the first one person play which has been effectively staged by Dramaworks.  Most recently, there was the highly successful Lady Day at Emerson’s Bar & Grill by Lanie Robertson,  Equally triumphant were two more single character plays, Rob Donohoe’s portrayal of Truman Capote in Jay Presson Allen's play, Tru, and Terry Teachout’s unforgettable Satchmo at the Waldorf

As diverse as these plays are, they have one thing in common – the unique formula which makes one actor plays so compelling – intimacy.  The audience is directly engaged, the actor often breaking the fourth wall so we see them up close and personal.  The best ones are rare theatre gems– and the three mentioned are certainly among those – with Belle of Amherst in that company as well.

The play is set in her Amherst, Massachusetts home, the playwright skillfully using Dickinson’s own diaries and letters to create her encounters with the significant people in her life.  It balances the agony of her seclusion with the brief bright moments when she was able to experience some joy.  Luce weaves her poetry throughout the script illuminating her brilliance and her humanity as well.  She basks in the sunshine of her eccentricities and enjoys playing up that part to her neighbors.

There are more than a dozen imaginary characters in the play; Emily has conversations with them all – her dear sister in law, Susan, brother Austin, her stalwart father, her sister Lavinia (“Vinnie”), her mother, with whom she was never intimate, classmates, her stern teacher. There is Thomas Wentworth Higginson, who she hopes will publish her poems, and a man she meets only twice in her life and yet she carries the torch of platonic love for him, Charles Wadsworth (“when I first laid eyes on him that Sunday morning, it was as if heaven’s own lightning struck me”).

These “conversations” are of course one sided, but the audience can figure out what Emily is hearing.  At the heart of the production is her genius and her contentment with her home being her universe.  (“You see, I’ve never had to go anywhere to find my paradise.  I found it all right here --- the only world I wanted….Paradise is no journey, because it is within. But for that very cause, it’s the most arduous of journeys.  I travel the road into my soul all the time.”)

She speaks directly to us and in today’s world of solitude and social distancing.  With the pandemic’s death toll now surpassing a stunning half a million people in the United States alone, Emily Dickinson’s preoccupation with themes of death in many of her poems resonate.  Only a gifted actress can rise above what might on the surface appear to be maudlin, making it profound and even humorous.

When asked about doing a one character play, Margery Lowe said “it's definitely daunting being the only one in the dressing room, and it sure is a lot of just my voice. Plus... oh so many words! But in an odd way, it doesn't feel alone because so much of her family is ‘on stage’ with her.”

She particularly admires the playwright: “the truth of this Emily has to come from what the author writes in the text. I think William Luce wanted to shatter the previous image of a dour recluse, and show a woman in her youth, her relationships throughout her life, her joy and brightness, her existential and introspective struggles, and her immense wit. My greatest hope is that we honor his intentions and show a real, feeling, strange, funny woman that just happened to think differently, using her words in a way that most of us can only dream of.”

It remains to be seen whether this streaming version is a template for future productions or part of a future which might give the audience the option of viewing live or online.  But as this is being professionally filmed and edited, with a Carbonell award winning team of William Hayes as Director, Set Designer, Michael Amico, and Costume Designer Brian O’Keefe collaborating on the production, it is an auspicious beginning of a real theatre season.  Kirk Bookman is the lighting designer, and Roger Arnold is the sound designer.

Tickets are free to those who subscribed to the upcoming season of PBD or Actors’ Playhouse.  (If anyone is uncertain whether they are current subscribers or wishes to subscribe now to receive a free ticket to The Belle of Amherst, contact the respective box offices). Non subscribers can purchase the link to view the show during its streaming period of April 2 – 6 for $30.  For technical reasons, tickets can be purchased only through PBD’s website: www.palmbeachdramaworks.org or box office: 561.514.4042, x2

Hayes and Arisco are planning to announce their 2021-2022 seasons in the next few weeks. “It’s our way of saying, ‘We’re still here, we’re still creating art, and we’d love your attendance when you feel comfortable,” they said.

The Brain – is wider than the Sky –

The one the other will contain