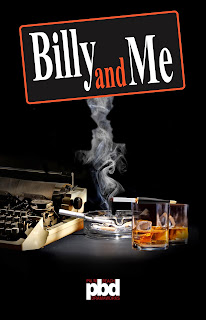 Blow out the candle of the present and imagine going back in time into Tennessee Williams’ memory revealing his relationship with William Inge.  That opportunity has been remarkably created by Terry Teachout in his latest play, Billy and Me, world premiering at Palm Beach Dramaworks.  Williams and Inge were among the playwright elites, friends, and possibly even lovers.  Teachout, a well known critic, playwright, and writer, is guided more by his knowledge of the two men and their plays than by historical record.  He has created a provocative new drama of uncompromising art and imaginative truth, vividly executed under the direction of William Hayes, PBD Producing Artistic Director, who inspired the idea for the play. In fact, the play is a major collaborative effort between these two professionals.

In the opening act, Williams is anxiously awaiting reviews of The Glass Menagerie after Chicago tryouts on New Year’s Eve, 1944.  The setting is a gay bar where he is also waiting for a relatively unknown critic he once met who has come to review the play, William Inge.  Inge who is furtively gay, shows up in a faltering state, terrified of the bar scene and seeing Tennessee Williams again.  He is stunned by his unpretentious way of living his life openly and particularly of his gift for poetic language.  He is so staggered by the play’s force and honesty that he timidly confesses he’s thought of becoming a playwright himself.  He is goaded on by Williams: “You’ve got to write about sissy little Billy Inge. You got to be him. Face it and tell it, starting right here in this dump. No more secrets! No more shame! Live your life! You hear me? It’s all you’ve got! There isn’t anything else!”

And it is language Teachout so perfectly captures, bringing his interpretation of both men to the stage, the repressed Inge, and the charismatic, poetic Williams.  He incorporates special conceits, the audience being allowed behind the hallowed veil of backstage, the setting of the play’s scenes and breaking the fourth wall to speak to the audience or visiting his inner self to address his mother and sister Rose.

It’s a dizzying journey and the second act bursts upon the stage some 15 years later, with the unthinkable, Inge’s first commercial failure, A Loss of Roses being panned by the critics after years of Broadway and film hits.  In contrast to the sleazy bar scene of the first act we witness Inge’s badge of prosperity, his Sutton Place apartment, replete with a Willem de Kooning painting and all the trappings of monetary success as the framed posters from the Broadway productions of Come Back, Little Sheba, Picnic, Bus Stop, and The Dark at the Top of the Stairs attest.

In contrast to Tennessee Williams’ rise in the first act, is his apparent career stagnation in the second, which brings out his monstrous jealousy of Inge, in spite of his apparent attempts to console his friend.  He reminds Inge that it was his encouragement and contacts – particularly Audrey Wood his agent -- which paved the way for his friend’s success.  The table is set for the play’s gripping climax which begins with a contretemps between the two about their plays, the kind of argument no friend can win, gathering intensity to a near calamitous result.

As much as Tennessee Williams is the luminary of Billy and Me, the play’s dramatic arc is about William Inge.  But the story about how Inge became a playwright and the impact Williams had on his career, could not have been compellingly told without the bravura performance by Nicholas Richberg who strikingly captures Williams’ flamboyant persona.  His transformation in real time, on stage from the aged Tennessee Williams to his younger self, and then back again is heartbreakingly effective. His comic timing is carefully executed, inhabiting Williams’ personal pathos and vitriolic embrace of the truth, frequently in an alcoholic daze.   He carries the play’s poetry, some quoted from The Glass Menagerie but most penned by Teachout.  “Beauty is truth, truth beauty – start with the truth and then make it beautiful.”

In many ways Tom Wahl’s challenge in portraying William Inge is the playwright himself.  Teachout could take just so many liberties with a character who mostly eschewed the public spotlight, especially when held up to the brassy extroverted nature of his counterpart.  Wahl stoically holds his own, courageously portraying a conflicted character, shy, insecure, secretly gay, and an alcoholic like Williams.  His role as straight man is compellingly acted with self loathing and awkward pauses that successfully capture a deeply disturbed man.

There is a reference made in both acts that the two writers are “speckled eggs.”  As Inge relates it, his mother “called me…her ‘speckled egg’…. I wonder how you ever got into my nest.”  Wahl’s character never is able to break through the shell.  It is heartbreaking to watch, a metaphor for anyone who has ever felt like an outsider.  It’s a difficult part and Wahl emerges as that self-effacing, insecure writer, a character with whom the audience can easily empathize.

Cliff Burgess, a PBD veteran, effectively plays three different characters, the impassive stage manager, the flirtatious waiter, and a somewhat comical doctor.  All three roles are integral to the drama, validating both playwrights.  He creates needed pauses from the taut action on stage.

The skillful scenic design by Victor Becker is representational, effectively highlighting the stark contrast between the dank and seedy bar room scene of the first act to Inge’s affluent Sutton Place apartment in the second.  Each part of the scenery is moved as Williams recalls it from memory.  In fact, when the audience arrives, the stage is simply a backstage set creating an anticipation of the action to follow.

Paul Black, the lighting designer picks up on that with constructive lighting, carving out space where there may be a black wall in the background, casting light to make the abstract seem real.  His lighting on the aged Tennessee Williams is particularly effective in achieving the suspension of disbelief.

David Thomas is the sound designer and there is an interesting back-story to his PBD debut.  Three years ago Thomas was the sound designer for the off-Broadway revival of Inge’s A Loss of Roses which is the subject of Act II of this play.  Terry Teachout reviewed that revival, praised the play, and David Thomas’ musical selections, and unknown to him, Bill Hayes hired him for Billy and Me.  Clairvoyantly, Williams says to Inge: “Hell, maybe all those bastards are wrong about Roses. Who knows? Maybe in fifty years some hotshot producer will dig up the script and a new bunch of bastards will go see it and say, ‘You know what? Those other bastards—they were wrong!’”  Teachout is ironically one of the “new bunch.”

Thomas has a lot to work with for sound, the singing of the drunken men in the unseen back room of the bar, the music on the jukebox, and magical elements that work with the memory aspects of the play.  As quoted by both Williams and Inge (from The Glass Menagerie): “In memory everything happens to music” and the sounds are evocative.

Costume designer extraordinaire, Brian O’Keefe, who is PBD’s Resident Designer, while needing a limited number of costumes for the five different characters plus stagehands in the play, imaginatively reinforces all the personalities and the different periods of the two acts with his usual creative touch.

William Hayes, the Director, has taken many dramatic inventions and put them seamlessly together into one flowing production, and we’re caught up in the illusion.  His inspired staging clearly conveys Teachout’s structure and words and the underlying message: be true to ones’ self and if you are a writer, write --- claim your artistic destiny!

As Williams said in the prologue to The Glass Menagerie, “Memory takes a lot of poetic license. It omits some details; others are exaggerated, according to the emotional value of the articles it touches, for memory is seated predominantly in the heart.”  The same can be said for this superb production, worthy of this world premiere, destined to go beyond its Palm Beach Dramaworks origins.
Posted by Bob at 11:48 AM