Pull Up! Pull Up!

Like many people, I feel disillusioned by the first year of Obama’s Presidency. This is probably more my problem as he is a mere mortal and inherited so many crises, long time in the making, deeply ingrained, that he would have to be Superman, flying around the world to turn back the clock of time, to undo faulty foreign policies, reconnect the dollar to some form of the gold standard, change the unrealistic long term promises of Medicare and Social Security, roll back the deregulation of our financial institutions, and I could go on and on, but you get the picture of, perhaps, a society in a spiraling decline. Despite our cries of “Pull up! Pull up!” the ground closes in.

I still think the President could have devoted more of his first year to policies addressing what I called a “new economic morality.” Instead, he had focused more on healthcare, not that that is not also important. But Main Street seems to have been sacrificed at the altar of Wall Street and we are angry. Who truly believes the economic crisis is solved rather than being merely postponed? Let another generation deal with it, the same response of previous administrations. How long can we kick the proverbial can down the road? What kind of healthcare can this nation have if it is bankrupt?

So, I confess, I got caught up in “the dream,” the fantasy that one man, Mr. Obama, could make such a huge difference and in such a short time. I’ve been chastened by disillusion. The extent of my buying into the dream at the time is borne out by an email I had sent to a friend, a mother of a young family, suggesting she read my then recent blog entry. I quote this is below, and I conclude with that entire entry:

“Did you enjoy the inauguration? To me, it was one of those great moments in American history, and I am glad to have been around to witness it and not just read about it. What Obama does with this opportunity, is anyone’s guess but I pray it turns out well for your children’s sake and for those of my grandchildren, if I should be so lucky.

I had an interesting experience the day before the inauguration, Martin Luther King Jr.’s birthday. First, I was plagued by dreams so I got up at about 5.00 am and began to write in my blog. It just flowed as if someone else was writing it. I usually don’t post stuff I write until I have time to ruminate about the piece and do some editing, but that morning was different. So here is what I wrote: http://lacunaemusing.blogspot.com/2009/01/early-in-morning.html 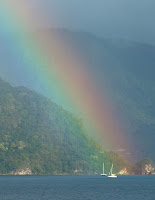 After posting this, I went out for my usual walk as the sun was rising, wearing my radio earpiece. The station was playing the famous Martin Luther King, Jr. speech, “I Have a Dream.” What a magnificent, poignant rhetorical piece, so apt on the eve of this particular Inauguration day. I had forgotten its details (although I watched it live in 1963). So as I walked, I listened, and suddenly in the western sky, with the rising sun, a broad, magnificent rainbow appeared. It deepened during my entire walk and as King’s speech ended it faded (I could get spiritual over this).”

Monday, January 19, 2009
Early in the Morning
It is early in the morning on the eve of President-elect Obama’s inauguration – in fact very early, another restless night. When it is so early and still outside, sound travels and I can hear the CSX freight train in the distance, its deep-throated rumbling and horn warning the few cars out on the road at the numerous crossings nearby.

Perhaps subconsciously my sleeplessness on this, the celebration of Martin Luther King’s birthday, relates to the incongruous dreamlike images of the bookends of my political consciousness, from the Little Rock desegregation crisis of 1957, the freedom marches that culminated with the march on Washington in 1963 and Martin Luther King’s historic "I Have a Dream" speech, to the inauguration tomorrow of our first Afro-American President. All this breathtaking demonstration of profound social change in just my lifetime.

Much has now been said comparing Obama to Lincoln. In my “open letter” to Obama that I published here last May http://lacunaemusing.blogspot.com/2008/05/open-letter-to-senator-obama.html I said “Your opponents have criticized your limited political experience, making it one of their main issues in attacking your candidacy. Lincoln too was relatively inexperienced, something he made to work to his advantage. Forge cooperation across the aisle in congress, creating your own ‘team of rivals’ as Doris Kearns Goodwin described his cabinet in her marvelous civil war history.”

The Lincoln comparison is now omnipresent in the press, not to mention his cabinet selections indeed being a team of rivals. But I am restless because of what faces this, the very administration I had hoped for: a crisis of values as much as it is an economic one. The two are inextricably intertwined.

I am reading an unusual novel by one of my favorite authors, John Updike, Terrorist. One of the main characters, Jack Levy laments: “My grandfather thought capitalism was doomed, destined to get more and more oppressive until the proletariat stormed the barricades and set up the worker’ paradise. But that didn’t happen; the capitalists were too clever or the proletariat too dumb. To be on the safe side, they changed the label ‘capitalism’ to read ‘free enterprise,’ but it was still too much dog-eat-dog. Too many losers, and the winners winning too big. But if you don’t let the dogs fight it out, they’ll sleep all day in the kennel. The basic problem the way I see it is, society tries to be decent, and decency cuts no ice in the state of nature. No ice whatsoever. We should all go back to being hunter-gathers, with a hundred-percent employment rate, and a healthy amount of starvation.”

The winners in this economy were not only the capitalists, the real creators of jobs due to hard work and innovation, but the even bigger winners: the financial masters of the universe who learned to leverage financial instruments with the blessings of a government that nurtured the thievery of the public good through deregulation, ineptitude, and political amorality. This gave rise to a whole generation of pseudo capitalists, people who “cashed in” on the system, bankers and brokers and “financial engineers” who dreamt up lethal structures based on leverage and then selling those instruments to an unsuspecting public, a public that entrusted the government to be vigilant so the likes of a Bernie Madoff could not prosper for untold years. Until we revere the real innovators of capitalism, the entrepreneurs who actually create things, ideas, jobs, our financial system will continue to seize up. That is the challenge for the Obama administration – a new economic morality.

It is still early in the morning as I finish this but the sun is rising and I’m going out for my morning walk. Another freight train is rumbling in the distance. I hear America singing.