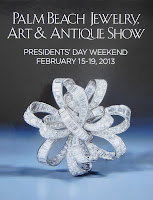 February is peak season here in the West Palm Beach area.  There are more theatres, parties, exhibits, and restaurant rendezvous than we ever experienced in the northeast.  It's sort of like being a teenager again, ne'er a night at home. If I wrote about every such instance in this space, each would be like an expanded Twitter entry.  So, instead, this is a roundup of some of the happenings in the first part of the month, in no particular order. 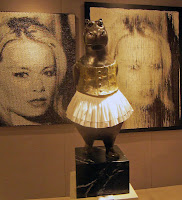 But segueing from my last entry in which there is an implied correlation between boating and art, we visited this weekend's noteworthy Palm Beach Jewelry, Art &Antique Show where international dealers, "attracts tens of thousands of private collectors, museum curators, investors and interior designers."  Red carpet night was on Friday and we were lucky enough to be invited by our friends Harry and Susan to mix with the rich and famous (they seem to be able to get tickets to anything!). This show is like Art Palm Beach but on steroids. 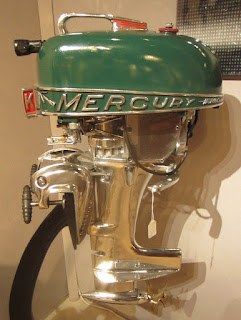 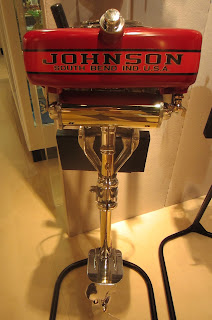 Although paintings and antique furniture and jewelry seem to be the standout exhibits (all for sale of course at breathtaking prices), I was attracted by the antique marine engines, refinished to be exacting models of the originals, sparkling in chrome and painstakingly restored.  Boating and art can be compatible. 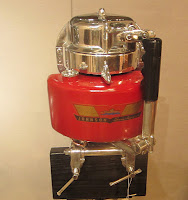 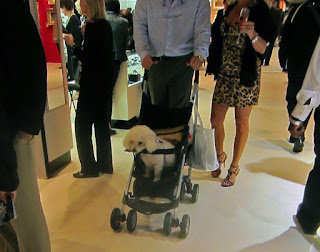 Part of the fun of attending such an event is to see and be seen.  Where else can you find a dog being escorted through the exhibit in a baby stroller?  I found a rotund object of art looking up and decided to pose there myself looking up.  In just a few moments a number of people stopped to look up themselves. 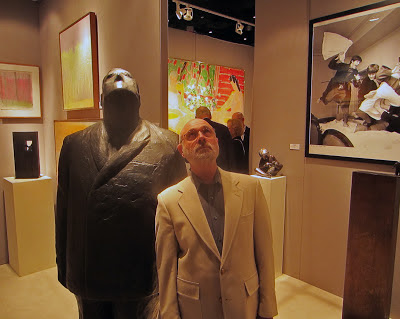 Earlier in the month Ann and I had made several trips to The Society of the Four Arts on Palm Beach proper.  The Society hosts a number of cultural programs that are unique, starting with Jeffrey Siegel's "Keyboard Conversations."  The Feb. 3 program was devoted to Claude Debussy and, as usual, Mr. Siegel first explained each piece, highlighting some of the themes at the piano first, and then playing the piece in  its entirety.  It is better than a concert.  I wish I had learned classical instead of "popular piano" skills, but had I gone that route, perhaps I would not play at all at this point in my life. (How many people do you know who say they "used" to play the piano?)  That is the problem with the classical technique  -- use it or lose it.  So, perhaps I should be grateful as my skills are easily retained and although I cannot sight read the bass clef and have to improvise with chords, I can play some classical that way, as the brief video below attests (naturally, Debussy inspired by Mr. Siegel, but apologies to you, sir).

On Feb. 6 we found ourselves back at the The Society of the Four Arts for a performance of Pride and Prejudice by the L.A. Theatre Works.  As this is a traveling group, don't miss it if it comes to your town!  The actors are in costume but the work is presented as a radio program, the performers standing at microphones, but not reading from the script -- acting their parts -- and the productions have sound effects, just like an old time radio show.  Some of the actors play multiple parts with on stage costume changes.  It is very effective and Ann and I were briefly able to enter the world of Jane Austen (Ann's favorite author and one of mine). 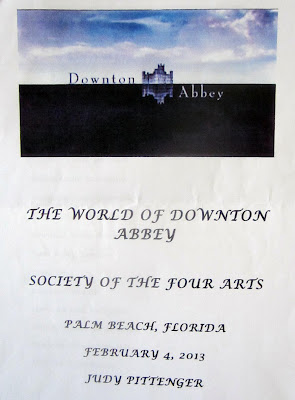 Ann returned, yet again, to The Society of the Four Arts the following week for an all day special lecture on Downton Abbey, to which we are both utterly addicted.  Naturally, high tea was served.  Alas, tonight is the last episode of Season 3.

Last night we had a Mediterranean dinner with three other couples at one of their condos overlooking Lake Worth, Singer Island, and West Palm Beach.  Beautiful. Each couple brought a part of the meal, Ann's assignment was the dessert, Tiramisu. My assignment was to enjoy.  "'Tis the season!" 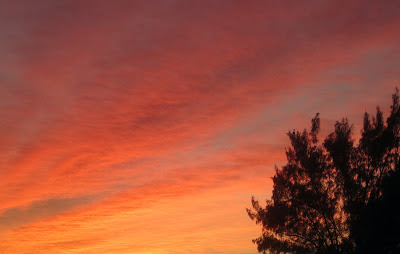 Senseless to the Sublime

The last two nights make me think of Franz Kafka's The Hunger Artist, in which a famous fasting artist is on display in a circus menagerie, the crowds pushing past him to get to watch the lions stalk and feed. "He immediately got an earful from the shouting of the two steadily increasing groups, the ones who wanted to take their time looking at the hunger artist, not with any understanding but on a whim or from mere defiance—for him these ones were soon the more painful—and a second group of people whose only demand was to go straight to the animal stalls." It is a highly symbolic story of how artists sacrifice themselves for their art and the general public's ignorance of what great artistry demands and preference for sensational pursuits.

One of the reasons we live in this area of Florida is for the cultural diversity it has to offer. True, it does not have the advantages of a London or a New York in its breadth or consistently high quality, but knowing where to go can uncover some wonderful cultural events. Case in point, our favorite small theatre where we never miss a production, Palm Beach Dramaworks. But the largest theatre in the area is West Palm Beach's Kravis Center for the Performing Arts and we've seen some fine musical revivals there over the last several years, South Pacific standing out in my mind, and some special programs such as when Sondheim visited for an evening discussion of his works.
Admittedly, it was with some trepidation that we got tickets for the Kravis’ production of Beauty and the Beast but Ann had tried to see the Broadway version, liked some of the music, and never could get tickets so we were hoping that this touring production would at least be on par. Tuesday night we saw the opening and it was so dreadful that we left at intermission. This review gives some of the details although it is actually very restrained in its criticism.


It is a Disney dumb-down production presumably for the kiddies, with one dimensional slapstick characters, but, amazingly, most of the adult audience seemed to be laughing at the childish humor which at best rose to the level of a sitcom. The fact that a Beauty and the Beast could flourish for so long on the Great White Way says much about the public's taste in musicals. We should have known better!

The following evening we sought redemption, having long ago booked tickets for a series we have followed for years, Keyboard Conversations ® with Jeffrey Siegel at The Society of the Four Arts in Palm Beach. These are "unique concert-plus-commentary format in which he speaks to the audience about the music before performing each work" in their entirety. Wednesday night was one of the most demanding programs we've ever heard this highly-acclaimed American pianist perform, tackling three of the most difficult pieces written for the piano by Johann Sebastian Bach (Chromatic Fantasia and Fugue, BWV 903), Samuel Barber (Fugue from Piano Sonata, Op. 26), and Ludwig Van Beethoven (Sonata No. 23 in F minor, Op. 57 --- the "Appassionata). Mr. Siegel playfully calls the program "Three Great B's Bach, Beethoven and Barber" (the latter B normally reserved for Brahms, but this is the 100th birthday celebration of Barber, one of America's leading composers, a contemporary of Bernstein and Copeland). In addition he played two of Barber's "Excursions" which I had never heard and reminded me so much of some of Gershwin and Copeland.

The physicality of the performance was astounding. As I play the piano myself, I have a special appreciation for what Siegel accomplished last night, performing the entire program without sheet music, keeping up with the tremendous technical demands of these pieces. Indeed at the end of the night, when he conducted his traditional audience question and answer portion of the program, he seemed, justifiably, physically spent, perhaps like the artist in Kafka's story. But this audience was brought to a standing ovation in appreciation. 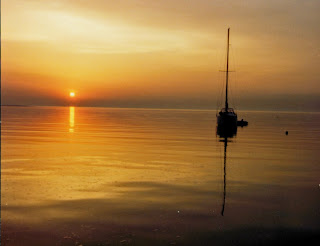