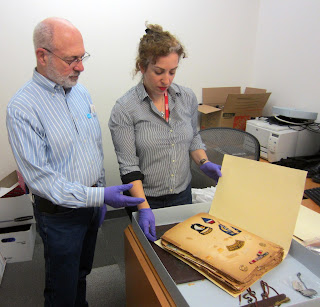 We recently returned from a four day trip to the Big Easy.  Our last visit was in 1972 and we felt that we wanted to see the city again and also incorporate a meeting with the archivist at the WWII Museum to which I donated my father’s WWII scrapbook, his letters and hundreds of photographs as well as 16mm films.  My father was a Signal Corp photographer in the European side of the battle.  I’ve written about it extensively in my blog.

I called him the accidental soldier, but weren’t most?  The Museum was very grateful to receive his collection (and I was relieved that it went to a good home).  That’s the good news but Jennifer Waxman, the museum’s archivist, indicated there is a long backlog in cataloging, digitizing and arranging for exhibitions of materials.  The museum is also involved in a substantial physical expansion.  So maybe in 2018 my father’s materials will see the light of day there. 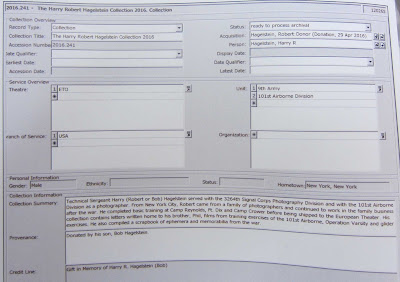 We toured the museum and marveled at the scope and quality of the exhibitions, including the traveling exhibition from the United States Holocaust Memorial Museum, State of Deception: The Power of Nazi Propaganda.  Posters, photos, and newsreels tell the story of how the Nazi propaganda machine used biased information to sway public opinion during World War II.  There are obvious ominous parallels today to our ubiquitous fake-news-laden social media, so could it happen here?  Yes, unless we are capable of learning from the past. 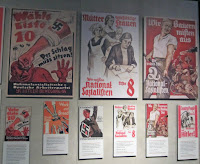 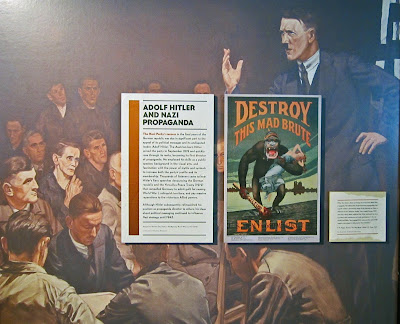 The museum gives you a dog tag so you can follow the story of just one ordinary GI, with various posts to hear his story.  It makes you feel connected to the content.  This massive war was not just something you read about in the history books, it touched everyone and those who had to fight it, like my father, are heroes, each in his or her way.  Other well known GI’s have plaques in the museum, such as the writer Kurt Vonnegut who was a POW, and the filmmaker George Stevens who became a Lieutenant Colonel in the Signal Corps.  I felt a special connection to each as I worked with Vonnegut publishing The Vonnegut Encyclopedia and Stevens would have been my father’s ultimate commanding officer in the European Theatre. 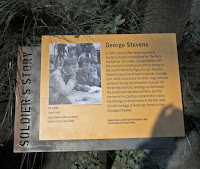 Special efforts have been made by the museum to give credit also to the Afro-Americans and Japanese who fought courageously for the U.S. although one group was still segregated and the other had families living in internment camps.  And efforts are made to memorialize the women who “manned” the posts in heavy industry normally held by the men who were now toiling on the various battlefields.  I left with tears in my eyes, just trying to take in what this country sacrificed in lives, and how they all pulled together.  Indeed, they were the greatest generation. Compare that to today as we are coming apart at the seams, where the words sacrifice, compassion, and pulling-together are absent. 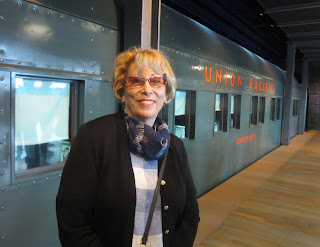 The Tom Hanks film, Beyond All Boundaries, sets the stage for a tour of the museum.  A must see. You can get a sense of what it must have been like to man a bomber, or be on a battlefield, to participate in the "war to end all wars."

From there, you can visit separate exhibits for the European and Pacific Theatres.  The US Freedom Pavilion: The Boeing Center is also a must visit with vintage aircraft and armed vehicles of the era.  Watch the exhibit come into being by clicking onto the video at this link.  In particular, watch the reassembly of the B-17 ‘My Gal Sal” after it was recreated after countless hours of volunteer work, having been retrieved from where it lay abandoned on a Greenland ice cap for decades. 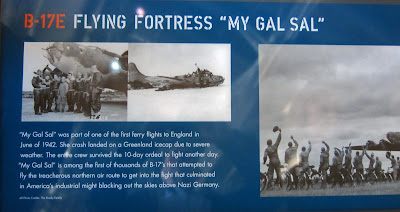 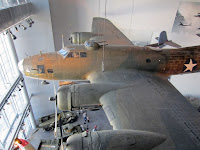 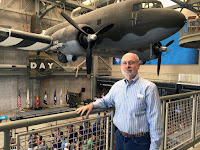 Be sure to visit their vintage 1940's soda shop where Ann and I shared an old fashioned malted milk shake.  I told her that as a kid I couldn't afford one, so we had NYC's famous "egg cream" which I remembered cost 10 cents vs. the malted milk's 25 cents.  (Now they're $7.00! at the WWII soda shop, but worth every drop of chocolate sweetness!) No wonder the WWII Museum has become a #1 must see when in NOLA.

Of course, there were other reasons to be in New Orleans: to soak up the jazz culture and to indulge in its culinary pleasures.  No grass grew under our feet in either department, Ann having researched restaurants and made reservations.  Luckily, our friends David and his sister, Nina, were great reconnoiters as they had recently been there for David’s daughter’s first jazz performance in the US.  She is a young jazz singer going to school in France and flew over to NOLA for an internship with the Parks Department. 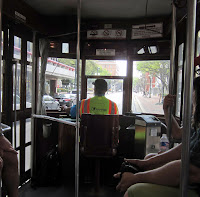 David is a professional bass player and knew the “in” spots.  And with a recommendation from Nina, upon our arrival Sunday morning we made a beeline for the brunch at Atchafalaya –where we had made reservations a month in advance.  Knowledgeable locals go there for the best jazz and Bloody Mary’s (you make the latter yourself from a side bar brimming over with an extensive stash of ingredients, a virgin for me, vodka for Ann).  We took the St. Charles streetcar to get there, and ended up with a very long walk working up a hardy appetite which was more than fulfilled by an incredibly delicious brunch! 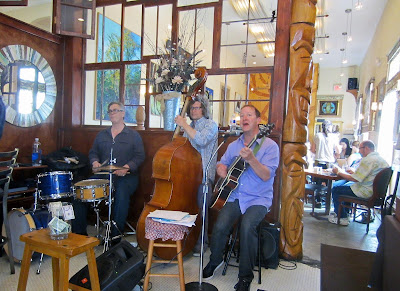 One thing about walking in NOLA, watch your feet!  Many of the old oak trees are forcing their roots towards the sidewalks, making them crack and heave.  We imagined an endless number of injuries as a consequence.  Half the time Ann needed me to hold onto her when it was very treacherous going.  Yet, NOLA’s streets invite walking, Mardi Gras beads still hanging from fences, trees.

It is senseless to name all the great restaurants we ate at, but Felix’s had to be our favorite as we went back for a second lunch.  Raw oysters by the dozen or charbroiled!  The raw oysters were unlike any we’ve ever had, large, sweet, juicy, and served with personality at the bar.  At the Oyster Bar in NYC they’d cost a fortune.  A dozen at Felix’s cost $15! 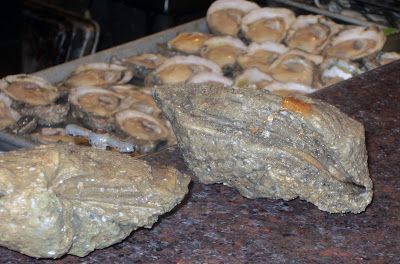 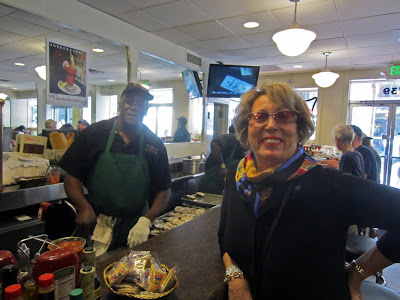 The Royal Sonesta Hotel’s Jazz Playhouse features the incredible Germaine Bazzle who at 84 can still scat with the best of them.  It’s first come first serve to see her Sunday 8.00 PM show so we were seated at 7.15, enjoying their appetizers which satisfied as dinner (imagine, fried chicken and waffles!).   My Twitter entry has a brief clip of her performance.

The Royal Sonesta is on the infamous Bourbon Street which has always been and still is a tourist Mecca, particularly for the very inebriated so we were grateful to get an Uber back to our hotel which was in the business district, right around the corner from the French Quarter, but a good place to stay if you are allergic to all night noise as we are. 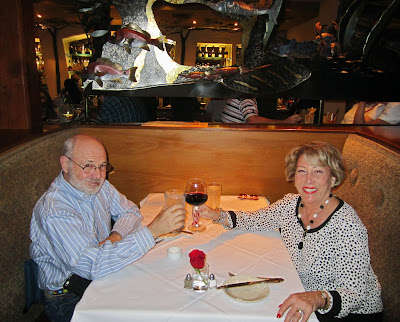 Another night we had a fabulous fish dinner at GW Fins, chatted with the very debonair owner and then followed that up with a visit to a local dive, Fritzel’s European Jazz Pub (serving drinks only) to see the local jazz legend Richard Scott.  Finding a seat is a battle. He has a huge following and plays with such abandoned joy as one can see from his face (upper left in the photograph).  This place is also on Bourbon Street so, again, Uber back to the hotel. 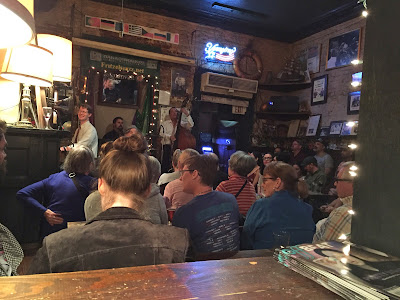 A visit to the Mississippi River was a must which also involved touring the French Market (mostly tourist shops unfortunately, but, still, Ann bought a beautiful African-design dress there), and then we enjoyed the obligatory consumption of NOLA’s famous Beignets and chicory coffee. 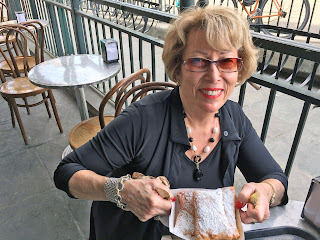 The New Orleans Holocaust Memorial is located in Woldenberg Park, right on the Mississippi as well, an “optical and kinetic sculpture, which is both a somber and hopeful tribute to Holocaust victims and Jewish people,” which looks different depending on your viewpoint.  It’s an unusual place for it, but its message powerful. 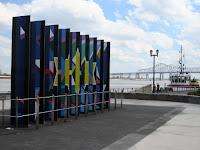 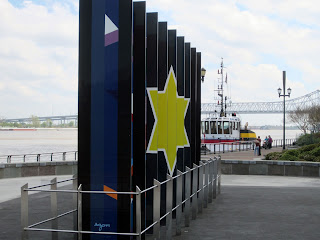 The river itself is the muddy one I remember, broad and powerful currents, one of the longest rivers in the world.  By its banks I caught a violinist engrossed in his music and the river’s flow. 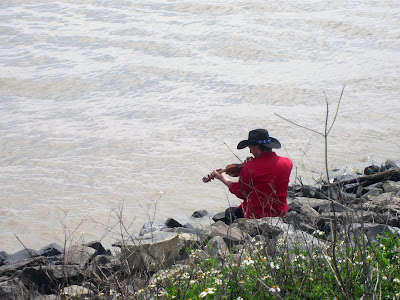 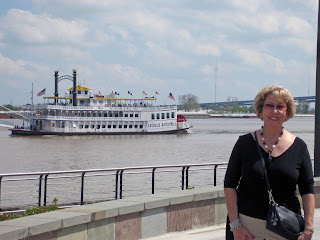 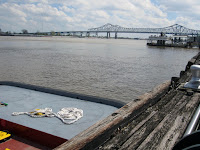 Much of our last day was spent at the old US Mint, which is also near the French Market.  The New Orleans Jazz Museum is currently housed here and so we had the double enjoyment of touring what was once a fully operating Mint as well as the Jazz Museum which is operated by the US Parks Department (where David’s daughter, Stacy, interned). 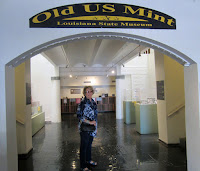 There are free 2 PM concerts there and we were lucky enough to catch the Kris Tokarski Trio which plays traditional NOLA jazz.  It was so enjoyable that my cheeks ached from smiling during the one hour performance.  A brief video can be seen on my Twitter feed here 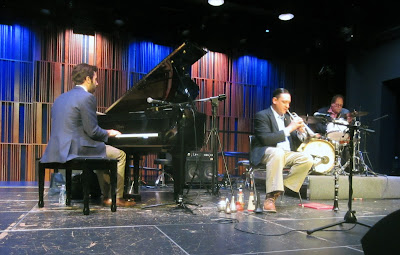 There is also a special exhibit honoring the great Louis Armstrong, such an innovator and symbol of the city itself.  One can see the white piano of Fats Domino there as well.  Together, the concert and the exhibits make for a very moving history and keeping this going represents such a small expense, one that is apparently slated for elimination in the new US budget.  How we can abandon our very culture in favor of buying a few more bullets is dismaying. 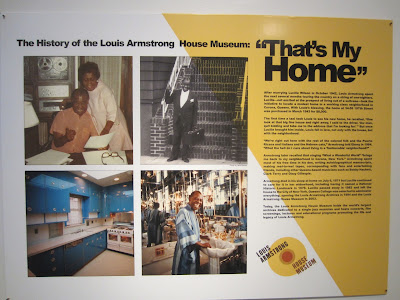 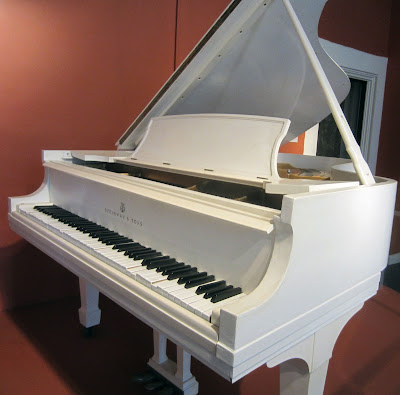 That final night we saved the best for last, dining in a very innovative space, Restaurant Rebirth, housed in an old warehouse is now a farm to table restaurant with an unusual and creative menu.  The photograph of the shrimp-stuffed-with-eggplant appetizer speaks for itself! 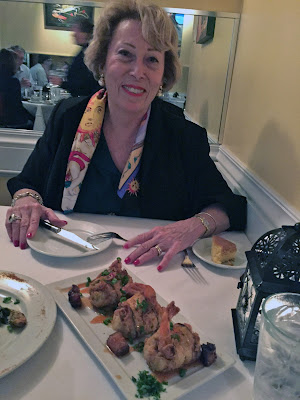 Our hotel was across the street from what we came to call the “shop around the corner,” in this case a Watch and Clock Shop.  Every time we returned to the hotel its lamppost, clock and eagle grabbed our attention and so we finally decided to take a closer look.  I was curious how it still survived in this age of electronic everything and the answer is simple: old fashioned friendliness, service, and craftsmanship.  There we found a very reasonably priced pocket watch, one Ann can wear at the end of a necklace, so she can abandon her wrist watch and look stylish as well.  This has mechanical elements and one has to wind up the watch.  How many remember doing that in this age?  I also enjoyed their cat who they call Venus, as she’s like a fly trap, enticing you to pat her belly and then grabbing your arm by all fours.  I respectfully said hello to the kitty from a distance. 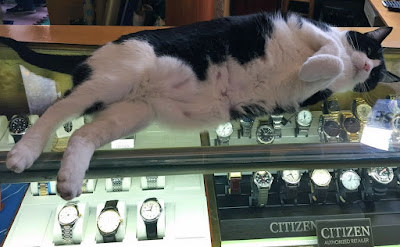 Early the next morning we were on our way home. What a great city to visit for a few days and to take in a culture unlike any other.