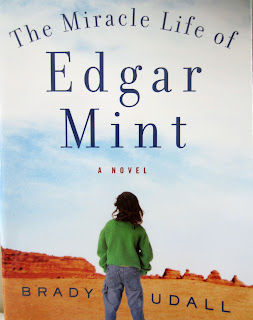 While living on the boat, we are able to catch up on our reading.  As I haven’t made the transition to the Kindle yet, we ship up a box of books for the summer and they sit on our little bookshelf on the boat, awaiting their turn.  Part of the fun is looking through them, deciding upon the next read.  I selected a number of novels, some recommended by our son, Jonathan.

When John Updike died, I mourned not only his passing, but also what his loss would now mean to the current state of American Literature.

It took a younger generation, Jonathan to be precise, to introduce me to some fresh, intelligent and extremely moving literature, not only Eric Puchner's Model Home which I thought was a fabulous first novel, and now his second recommendation, another first novel, The Miracle Life of Edgar Mint by Brady Udall which was published in 2001 (Puchner’s novel is more recent, 2010).

These are extraordinary first novels, major literary talent.  Udall has published his follow up, widely praised as well, The Lonely Polygamist which I have yet to read.  Interestingly, both the Puchner and Udall novels are set in the west and southwest (when I think of that area, I think of the photograph below I took somewhere in the southwest years ago), perhaps the new home of the American dream or the American nightmare.  However, the two novels differ greatly in their perspectives and voice, Puchner reminding me somewhat of Updike, Cheever, and Yates, while Udall’s The Miracle Life of Edgar Mint is a little Huck Finn, Oliver Twist, Rule of the Bone and The Book of Mormon –  oh, and throw in the Paul Newman film, Hombre, about a half breed Apache. 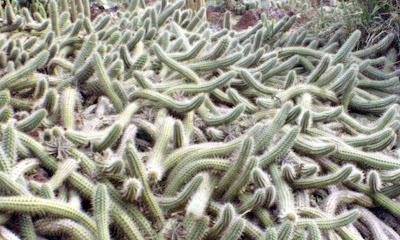 Udall writes a genuine Bildungsroman, our lovable but struggling protagonist Edgar Mint living out an upside down life (“In many ways, it occurs to me now, I have lived my life in reverse.  In the first half of my life I had to make all the hard choices and ride out the consequences, while in the second half I have lived the sheltered and uncluttered life of a child.”)  He is an orphan but like Oliver Twist has to go through a horrific childhood before emerging into the sunshine of a loving caretaker.

Along the way we meet his friends and his Fagins, the story gathering force and momentum as it unfolds, beginning with his self-assessment: “If my life could be contained in a word it would be this one: accident.”  From there it is one finely written calamity to the next culminating in a complete circle, Edgar achieving peace and a kind of maturity that only hardship can teach.

He is a half breed, part white (a “cowboy” father from Connecticut of all places!) and an Apache mother who becomes an alcoholic and deserts Edgar, who ends up in an orphanage from hell, not unlike those in Dickens’ novels. (“For the seven years my mother and I were together, I was nothing but an inconvenience to her, a burden, a source of pain, and her pregnancy with me was no exception.”)

Like the last book I read, Richard Ford’s Canada,  its first paragraph is spellbinding: “If I could tell you only one thing about my life it would be this:  when I was seven years old the mailman ran over my head.  As formative events go, nothing else comes close; my careening, zigzag existence, my wounded brain and faith in God, my collisions with joy and affliction, all of it has come, in one way or another, out of that moment on a summer morning when the left rear tire of a United States postal jeep ground my tiny head into the hot gravel of the San Carlos Apache Indian Reservation.”

He actually dies but a young doctor, Barry Pinkley (even the names give homage to Dickens) brings him back to life and Pinkley becomes obsessed with Edgar’s well being afterwards (“Everyone agreed that my survival was either an absolute miracle or a freak happenstance…but there was also general agreement that simple survival was as far as the miracle would go: there was no chance on earth I was going to be anything but a mental and physical equivalent of a turnip.”)  But Edgar befriends an older man in the hospital, Art, and when Edgar is diagnosed with “Dysgraphia,” the “inability to write,” Art insists that they get Edgar a typewriter.  Even though Edgar confesses: “I have to say it was not love at first sight,” when he was given a Hermes Jubilee 2000 typewriter. It becomes his salvation and he carries the albatross of his enormous output in a trunk wherever he moves: great comic fiction with lots of dark humor driving the story.

Out of the hospital he is sent to the William Tecumseh Sherman School (“My first day of school at Willie Sherman and I was about to realize that I was no longer Saint Edgar the miracle-boy, hospital sweetheart, beloved by all, but a walking target, a chicken among the foxes.  Not only was I the new kid…[and] not only was I a crossbreed.”)

But our hero survives and he is finally placed with a foster family in Utah, a Mormon family, the Madsens, as dysfunctional as any other American family, but at least a warm bed for Edgar, who thinks that this is the answer to his salvation, even receiving Baptismal and endeavoring to learn the Mormon religion.  That too is not the answer for him, but he thinks he has developed a calling in life and that is to find the mailman and to forgive him (Edgar knows that the mailman thinks he had killed him).

While Barry Pinkley and his foster mother Lara Madsen figure prominently near the novel’s conclusion, it is ultimately from this “calling” that the novel culminates into one of the finest written last chapters that I’ve read in years, gripping in its emotional power and a testimony to Udall’s writing gifts by constructing the perfect coda.

As I am merely about ten years late in discovering this novel, there are plenty of other sources for more information, but both Udall and Puncher are on my radar screen for fine writing in the future. 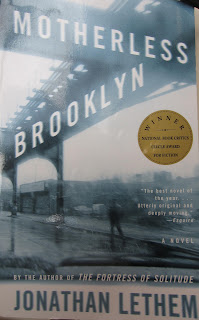 Before posting this I also finished Motherless Brooklyn, by Jonathan Lethem, another recommendation made by my son.  I do not mean to diminish its importance by not covering this novel with its own entry, but mysteries are not my usual reading fare and I feel a little off base reviewing the book.  But while a mystery, this novel is a brilliant piece of writing, with the very clever conceit of the main character, Lionel Essrog, having Tourette's syndrome which gives Lethem a platform for demonstrating his writing skills.  I’m also partial to Motherless Brooklyn as it is set not far from where I lived for almost ten years and through Lethem I could almost feel the macadam of the setting, Court Street, Carroll Gardens and Cobble Hill.

It shares some of the themes of Udall’s novel as well, a novel about an orphan, Dickensian characters, a coming of age story but in the form of a detective novel, our erstwhile hero endeavoring to find the murderer of his mentor, an underworld character, Frank Minna, who has rounded up Lionel and other orphans from the “St. Vincent Home for Boys” to serve his nefarious ends, not unlike, again, Oliver Twist’s upbringing.

The “language” of  Tourette's is like a coiled spring throughout Lethem’s tour de force: “I’m tightly wound. I’m a loose cannon.  Both – I’m tightly wound loose cannon a tight loose.  My whole life exists in the space between those words, tight, loose, and there isn’t any space there – they should be one word, tightloose.  I’m an air bag in a dashboard, packed up layer upon layer in readiness for that moment when I get to explode, expand all over you, fill every available space.  Unlike an airbag, though, I’m repacked the moment I’ve exploded, am tensed and ready again to explode – like some safety-film footage cut into a loop, all I do is compress and release, over and over, never saving or satisfying anyone, least myself.  Yet the tape plays on pointlessly, obsessive air bag exploding again and again while life itself goes on elsewhere, outside the range of these antic expenditures.”

There is one surprise after another in these pages, a labyrinth that the reader is compelled to negotiate to a fitting ending.  Simply put: I loved reading Motherless Brooklyn. One is always rooting for Lionel, his eccentricities giving him a special place in literature and, no doubt, the mystery genre.
Posted by Bob at 6:36 AM