The year ended on a sad note for us. Our friend and my colleague of some thirty years, Mitsuo Nitta, passed away two months earlier and we didn’t learn about it until we received a letter from Yushodo, his company in Tokyo: “I am Yoshie Kato, Mr. Nitta’s secretary. With great sorrow, I have to inform you of the passing of Mr. Nitta on 27th October 2015 at the age of 82.  I deeply thank you for your lasting friendship with Mr. Nitta, and would like to send my best wishes to you and your family.”  I stared at this letter in disbelief, not only stunned by the news but also because it revealed how out of the loop I am now in retirement.

Mitsuo was a well-known rare book collector, antiquarian bookseller, and reprinter of some very rare texts.  He made a presentation copy for me of his reprint edition of Samuel Johnson’s, A Dictionary of the English Language (1755).  (My company had reprinted Webster's 1828 Dictionary.)  He was a Member of Honor of the International League of Antiquarian Booksellers whose web site is publishing Letters of Condolences in Mitsuo Nitta’s honor.  I’ve been told that mine will be added soon, but as it may be edited and I’m not sure whether all the photographs will be included, I post it here as well in honor of my long-time friend and colleague, Mitsuo Nitta:

As I had retired from the publishing business more than fifteen years ago, it was only when we sent our annual Seasonal Greetings to Mr. and Mrs. Nitta that we learned from Yushodo that Mitsuo had passed away two months earlier.  I was shocked that my old friend had died, as was my wife and son.  It seemed impossible, a person with such brimming enthusiasm and largess of life.  And I felt particularly saddened that we had become so out of touch since my retirement that I only recently discovered this great loss.

I first met Mitsuo in 1968 when I was working for Johnson Reprint Corporation but it wasn’t until I became the President of the Greenwood Publishing Group in the early 1970s that our friendship and extensive business dealings blossomed.   I knew Mitsuo mostly from the publishing side of the business, Yushodo becoming our distributor in Japan and that relationship lasting decades.  We also cooperated on a number of joint ventures, including reprints of some antiquarian titles.

He always had that twinkle in his eye with a warm but restrained smile suggesting what the future might bring, soliciting an opinion and sharing his. Many of our joint publishing ventures were initiated with nothing more than a handshake agreement, committing resources even before a contract was drawn and signed, a mere formality.

When my wife Ann and I first visited Japan in 1975 he treated us royally and even helped set up appointments with some of his competitors with whom I had dealings on other projects.  Our evenings were occupied by a number of dinners with him and Hisako, or staff from Yushodo.  He liked to pair me with some of his younger managers, always intrigued by what we members of the “younger generation” might bring to the business.

He loved to share the Japanese culture with Westerners and had such generosity of spirit.  On one of my trips to Japan, at the very end of 1989, with Japan at its zenith of economic power, he asked me to make a major address on U.S. - Japan economic relations to Tokyo's Rotary Club consisting of executives of leading Japanese companies at the time. Mitsuo was my mentor for the speech which was very well received. 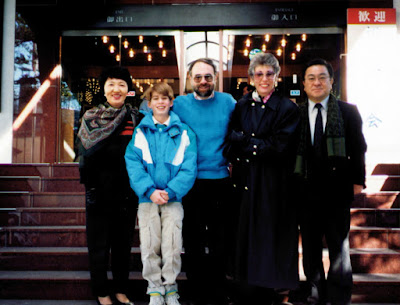 As that trip was at the end of the year, I brought my wife Ann and my 12-year old son, Jonathan, so we could experience the Japanese New Year together.  Mitsuo took Jonathan under his wing, admiring Jonathan’s inquisitiveness and interest in Japanese culture.  Mitsuo asked his son to take Jonathan for an insider’s tour of the Ginza area in downtown Tokyo.

We all travelled with Mitsuo and his wife to the Tateshina Resort & Spa northwest of Tokyo where Naruhito, the Crown Prince of Japan had stayed.  I’m not sure whether that trip was a greater delight to us or Mitsuo who was constantly amused by our reaction to living Japanese style (we loved it of course). 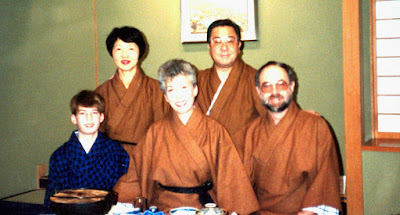 There on the eve of the 1990 New Year, we were treated to a special weekend where we were the only Westerners, sleeping on handcrafted tatami mats, eating traditional Japanese food. I remember that Mitsuo challenged me to guess the identity of one of the many dinner courses served throughout the 3 hour meal………something that tasted like steak tartar to me. He laughed when he told me it was raw horsemeat, a delicacy in the region. Luckily, I had sufficient Sake to wash it down.

The high point of the weekend was the spa. First we had to bathe ourselves sitting on small stools, using a bucket with water, soaking and scrubbing every inch of our bodies until squeaky clean. Then, with nothing on but the winter kimono, we walked outside into the freezing night air, with snow all around, disrobed, and plunged ourselves into the steaming hot tubs. A bamboo curtain separated the ladies from the men. We could talk to our wives but not peek. Jonathan took to this so naturally while I had to be coaxed into the hot pool, simply because the temperature difference was so great.  Mitsuo found this very funny. 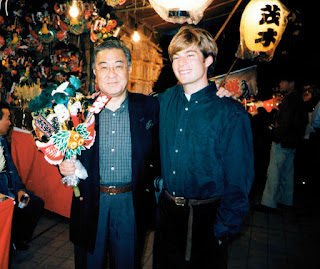 That trip had a lasting impact on our friendship and left such a deep impression on Jonathan that nearly ten years later he chose to spend his college junior year abroad at Doshisha University in Kyoto, immersing himself in the culture and the language.  Naturally, Mitsuo kept an eye on him, occasionally getting together and giving me his opinion of “the boy’s” maturation and adjustment.

Mitsuo and Hisako were in New York City in April 2011 when he heard I just had open heart surgery, with complications which required a two plus week stay in the hospital.  He insisted on flying down to Florida upon my returning home to see his old friend.  Sadly, that was the last time I saw him.  We hugged as he left. There will always be a place in my heart for Mitsuo, a person of remarkable spirit and dedication to his profession, one who has impacted so many lives.  Farewell, my friend. 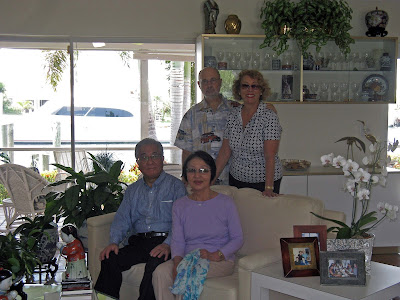