Malfeasance of Action and Morality

I used to write more in this space about topics such as this, but it lacks the immediacy of Twitter.  This space deserves more thoughtful pieces.  I’ve written about gun control (or the lack of it) and our culture’s love affair with guns in more than two dozen entries.  There will be more as the next mass tragedy is brewing, although gun violence is a daily occurrence, but generally not reported on.  How our elected representatives can ignore the arc from Sandy Hook to Parkland is unthinkable, unconscionable; indeed, a malfeasance of action and morality.  I see the face of Mitch McConnell in my mind’s eye as I write this as he, in addition to Trump, represents the worst kind of pandering to the NRA.  Ballots for bullets.

This is the one year anniversary of the Parkland shooting and as an anniversary it is being appropriately marked, particularly by our local paper, the Palm Beach Post.  If it were not the anniversary, it would be forgotten by our NRA blessed representatives who instead want to shift the problem of violence to refugees who are actually trying to flee to a safer place.  So “build a wall BS” transcends any discussion of violence in this country perpetrated by native born citizens.  Blame any feeling of insecurity on refugees, innocent people on the most part. The rhetoric and the demagoguery of it all boggles the mind, no gaslights the mind, the exact intention of this administration.

I’ve turned to twitter to at least make a statement on this, asking our representatives to look at each and every face of the Parkland victims and read their stories.  Let them never forget these helpless victims of their inaction as they are steeped in rhetoric about "The Wall," ignoring the nation's plea for sensible gun control.

Today’s Palm Beach Post should be required reading for every NRA elected representative and our “President” (who did not even mention Gun Control in his SOTU speech). We dare you to connect a face with every story. What I wrote a year ago: https://t.co/lJpbta3XPZ #Parkland pic.twitter.com/mqjau0Rnju
— Robert Hagelstein (@lacunaemusing) February 14, 2019

The People Have Spoken: Compromise!


It is amazing how close the anecdotal survey mentioned at the end of my last post came to predicting the 2.2% popular vote plurality for Obama (only a tenth of a percent off).  I wonder how many professional polling pontificators were as accurate!  Assume Florida is finally called for Obama, and that seems most likely at this point, the final Electoral College tabulation will be 332 for Obama vs. Romney's 206.  Here the survey of 289 vs. 249 was too pessimistic, although calling the winner.

This was no mandate for Obama, nor should it be. His political campaign of 2008 underestimated the depths of the economic crisis and the ability of a mere President to affect meaningful economic change.  Too many promises were made, indeed. Perhaps he has a more sober view of reality with the onset of his second term.

Looking at the results vs. 2008 clearly shows that the American public is dissatisfied with the status quo.  Obama's popular plurality in 2008 was 52.93% or 2.63% more than 2012.  That doesn't sound like much except when you look at the absolute vote itself, with Obama getting 9.6 million less votes than in 2008.  Less people voted, showing the disenfranchisement of the country as a whole.  We are all sick of the shenanigans of both parties.

But if Obama is listening, hopefully they are across the aisle as well.  Senate's Minority Leader Mitch McConnell's gave an ominous post election speech saying, "They [the American public] gave President Obama a second chance to fix the problems that even he admits he failed to solve during his first four years in office, and they preserved Republican control of the House of Representatives...Now it's time for the president to propose solutions that actually have a chance of passing the Republican-controlled House of Representatives and a closely divided Senate, step up to the plate on the challenges of the moment, and deliver in a way that he did not in his first four years in office...To the extent he wants to move to the political center, which is where the work gets done in a divided government, we'll be there to meet him half way."

It sounds like more of the same.  Will Senator McConnell and Representative Boehner get the message as well?  Boehner said "The American people also made clear there's no mandate for raising tax rates." Doesn't sound encouraging that Boehner is still drawing a line in the sand that there can be no tax increases in any compromise. Another game of chicken with the fiscal cliff and the debt ceiling?  Any sane person knows this cannot be merely addressed with spending cuts.  There will have to be some tax increases, a more progressive tax scale such as in the Clinton era.  Our economy did fine then, why not now?  Ok, guys, time to compromise.  The election results seem to be shouting that message. 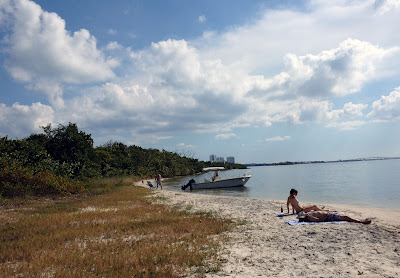