Here is a satiric fable, an extended parable for our times, making hilarity of the foibles of human nature, a change of pace from my usual reading fare, The Bear Went over the Mountain by William Kotzwinkle. My Cousin Joan

recommended this book to me, surprised I had never heard of it as it was published in 1996 and the publishing industry is the main setting. Joan and I share the same sense of humor, not to mention grandparents.

Simple story. Bear (who adopts the name of "Hal Jam" the last name coming off a jar of jam of course) finds a manuscript (intended to be the Great American Novel") written by an English professor who is on sabbatical in the woods of Maine, makes his way into the big city (the bear that is), poses as a human (you have to throw any sense of reality to the wind) to the extent that he can, and becomes the toast of the publishing world. He happily indulges in honey and other sweets, meeting important people, women pursuing him as if he is the reincarnation of Hemingway. The real author, meanwhile, in a fit of depression realizing he has lost his great novel, also loses his professorship, stays in the woods and, in fact, becomes bear-like, sleeping away part of the winter. I will not give the ending away, but who do you think Kotzwinkle thinks made the better trade of lives?

Meanwhile throughout the novel, the stage is set for some very funny moments. But one thing I cannot get out of my head while I read this is Jerzy Kosinski's novel, Being There, where the simple minded "Chauncey Gardiner" (the gardener at the estate of a well known man) is mistaken by the press to be a wise philosopher in his simplicity. "Plant the seeds and the garden will grow" -- Of course, if we make our investments and some tough decisions, the economy will revive! (Sort of like now.)

Here are but a few examples from The Bear Went Over the Mountain:

Ms. Boykins, a literary agent pursuing Hal, says "The sales forces will insist on a tour..." Hal Jam puts his paws over his ears as the din from the restaurant is overwhelming his "animality." "The racing stream of human speech glistened as it curved around obstacles and glided on, relentless in its gradient, while he panted in animal stupidity And then his nose twitched, the olfactory bulb at its root a thousand times more sensitive than that of a human. He straightened and moved his head around to isolate the natural scent he'd found within the synthetic veil of perfumes. There it was, moist, cool. 'Salmon.'"
Boykins says: "Yes, they do it skewered with tomatoes, mushroom, and 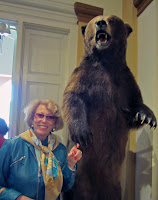 green peppers."
"'Raw,' said the bear with resurgence of primal authority."
"'Raw?'"
"'Raw female. Lots of eggs. In my teeth.' The bear tapped at his incisors."
"My god, thought Boykins, he is another Hemingway."

Or when Hal Jam goes shopping in a supermarket... "The skyscrapers of Manhattan had astounded him, and now the endless amounts of honey that man had available to him had humbled him to the ground. The intelligence, the inventiveness, the time and courage, it took to lay in this much honey was the final proof that man wore the crown of creation. 'Bears are just along for the ride,' he said to himself as he filled his cart with honey...."

Or his meeting with a Hollywood agent, Ms. Zou Zou Sharr at whom the bear looked "from under the peak of his baseball cap. It was the first time he'd been this close to a human female for any length of time, and he liked the experience. If she had some fur on her face and the backs of her hands she might be good looking."

Zou Zou misunderstands just about every brief phrase the bear utters as being a demand for a larger take from movie rights, saying "'Believe me, Hal, your piece of the pie is just what it should be and so is CMC's.'" "When I eat a pie, I eat it all," says the Bear. Zou Zou replies: "Of course you do, and I understand. The book is yours, it's your creation, and you want your fair share." Eventually, Zou Zou offers herself to the bear to get the contract. They "do it," the bear tossing her around the room. She's enthralled by being ravished -- he's an animal! Yes, another Hemingway! And they do it in a taxi -- "He'd passed a great human milestone. He'd done it more than once a year."

Eventually, the bear meets the Vice President and the President, again, another hat tip to Kosinski's novel.

As a former publisher, I laughed at almost every page. Indeed, these are the trade publishing people I saw flitting around in Frankfurt every year absorbed by their self importance.

In many ways the book is also reminiscent of Firmin which is about a rat who lives in a bookstore. And a rat figures near the conclusion of this book as well. That Kotzwinkle can keep up the conceit of Hal Jam being part of the American literary, political, and New York scene for the entire length of the novel is a testimony to his satiric artistry. Lots of fun reading this one. Thanks, Cuz Joan!!!!....... 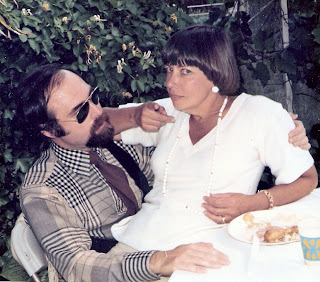