The Boys of Spring

The boys of spring turn into the boys of summer. If there was ever an argument for the existence of a God, it has to be baseball. Imagine, just the dimensions of the infield, not to mention the nuances of the game, would seem to argue divine intervention. Could man alone have set the distance from the pitching rubber to home plate at exactly 60' 6" and not just 60'? OK, bases are 90 feet apart. That sounds like man-made, but much of the game seems to have been handed down from the Gods.

I played some organized baseball as a kid, pitching because I couldn't hit worth a damn. As a lefty I had movement on the fast ball, tailing away from a right handed batter, like a mini screwball. I was a "crafty left-hander," with slow stuff to make the fast ball seem faster.

Although occasionally I'll still "throw" a ball with my neighbor (who batted against Herb Score in high school), I just follow the game when I can, especially the Yankees simply because they were "my team" as a kid. While the game itself hasn't changed much, the players and the business of baseball has. It's big business but obviously the public is willing to pay up, monstrous salaries and baseball franchises being supported by obscene ticket prices and concessions and huge cable TV revenues. 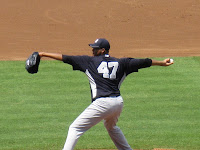 Does that mean the boys of summer play the game only for money? Of course not, but change has its consequences. Like earlier this month when my friend Art and I, with great anticipation, planned to go to the Yankees' penultimate spring training game in Port St. Lucie to play the NY Mets. What could be better, a preview of a NY rivalry? The tickets had been bought months in advance by friends of ours who found they couldn't use them, so we bought them at face value ($70 total). They were selling on the web for more than twice that amount as the game neared, the stadium seating only about 7,000 and the demand for those tickets far in excess of that. 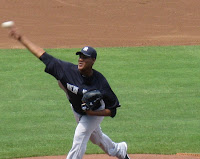 So the day of the game we drove up to the park early to watch batting practice, get our obligatory hot dogs, and just soak up the ambiance. Walking up a ramp to our seats we saw a bus, the driver standing nearby, and Art cried out, "is that the bus for the Yankees?" (thinking they probably flew and this question was rhetorical). "Yup," he said.

We didn't think Jeter, A-Rod, Teixeira et al would be busing it 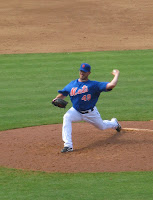 from Miami after the night game in Miami's new stadium the day before so we began to wonder who exactly would be playing. But they do bus the "B" team, and that is what the Yankees mostly fielded. Not known to the fans, 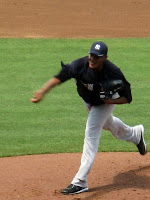 most of the Yankee "A" team flew to Tampa for their last spring training game, also against the Mets.

Some "A" players were there, notably Ivan Nova who pitched, the jovial Nick Swisher, and swift Brett Gardner, but that was about it. I knew the "A" team would not have played many innings, but wanted to get some good photos while they did. No such luck. So instead we watched the "other" Yankees, Almonte, Hall, 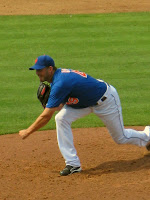 Castro, Bernier, Wilson, not exactly murderer's row. Sad, Cervelli was the catcher, joking with his teammates, not knowing he would be consigned to AAA ball just a couple days later.

While it was nice being at the ball game, any ball game, I could have passed on it given the crowds and the expense, but I was able to get some pictures of Nova (who pitched poorly) and of the Met's lefty, Niese, who didn't fare any better than Nova, both giving up 5 earned runs in the Yankees 7-6 loss. Swisher hit a home run and I was able to capture the swing and the ball with a timely photograph. But, we left well before the end of the game. 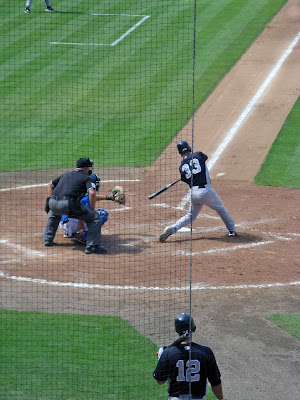 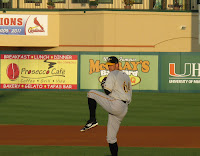 Happily, though, last night was our first minor league (Class A) ballgame at Jupiter's Roger Dean Stadium where Ann and I have "Silver Slugger" season's tickets. What a deal, 19 games, a hot dog and a soda all for $25 each (not per game but total!). How can you go wrong? Farm clubs of the Cardinals (Palm Beach Cardinals) and the Marlins (the Jupiter Hammerheads) play there during the summer. And Class A ball is played every bit as professionally as their Major League counterparts. And the joy is there, the hope of one day making it to the "show." A couple of

years ago we watched Giancarlo Stanton (then known as "Mike") in action, recognizing he was destined for the majors.

Last night the Cardinals played the Pirate's affiliate, the Bradenton Marauders. And in an ironic twist, having seen mostly minor leaguers at the spring training game, the Bradenton starting pitcher for this minor league game was none other than major leaguer A.J. Burnett, who was making a rehab start after having 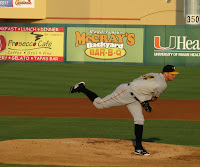 been injured in spring training. I've always thought Burnett was long on talent but a head case, and pitching like golf gets in one's mind. You need both the physical ability and the mental attitude to succeed.

As a Yankee fan, I had "suffered" with Burnett but I had hoped that a new venue would bring him out of his stupor. While he seemed to have his velocity last night, his pitches were not well placed, unlike those of the Cardinals' starter, Seth Maness who pitched seven shutout innings, most of his pitches in the low 90's and at knee high. Burnett looked dazed most of the time, ignominious as a starter in Class A, and left forlorn after giving up seven runs in less than 2 innings. It was sad and hopefully he has better success in the future. Palm Beach went on to win 10-4 but just being out at the beautiful Roger Dean field and soaking up the crack of the bat and the pop of the catcher's mitt made it a grand slam evening.