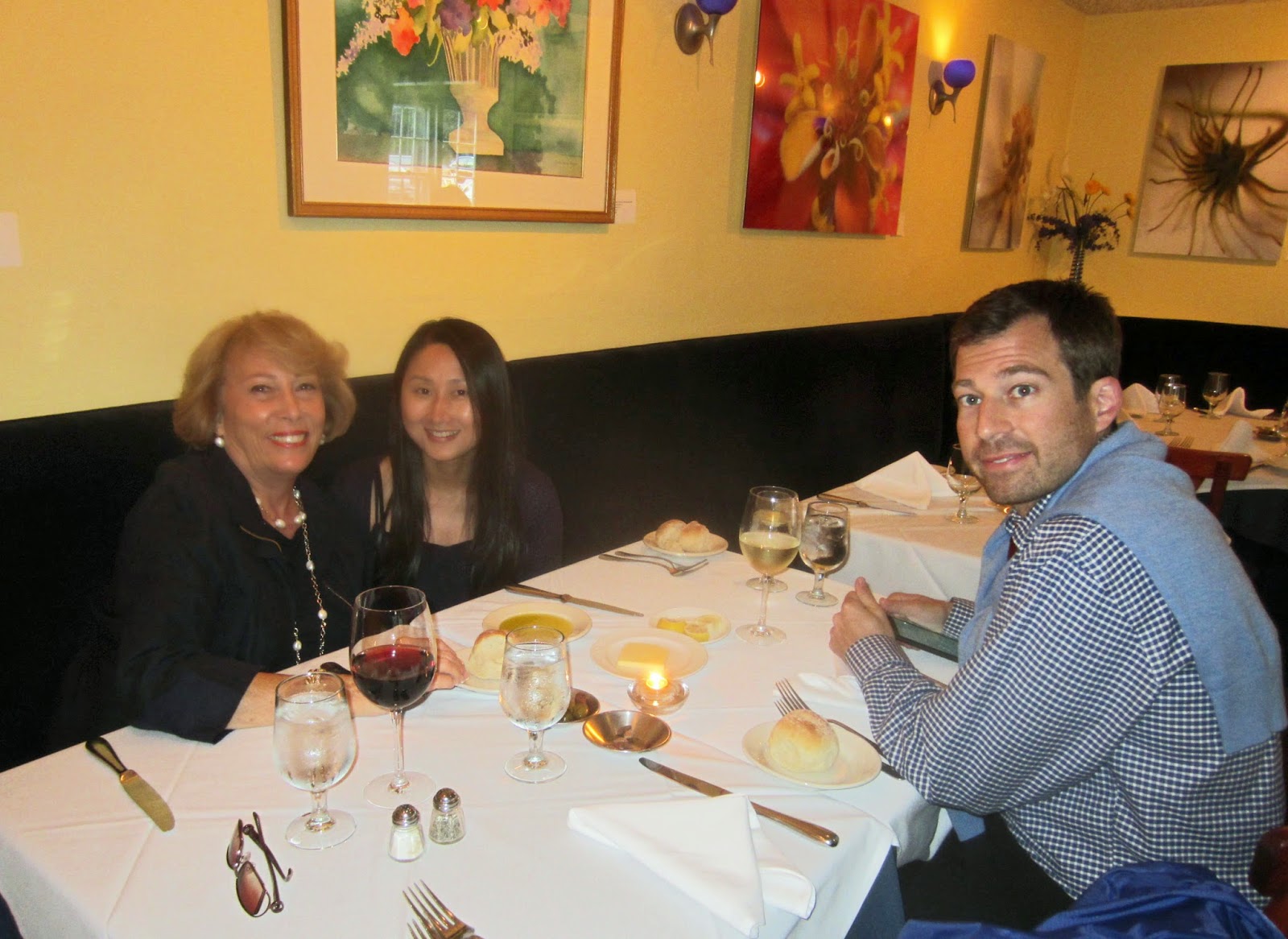 Our “vacation” on our boat in Connecticut wrapped up in a frenzy, meeting friends for dinner, saying our goodbyes, and spending our last night with Jonathan and Anna, first dinner at Westport’s lovely Blue Lemon, and then a night of splendid theatre at the Westport Country Playhouse.  We’ve been going to the WCP for some forty years and the one constant is the quality of their productions.  No wonder the Wall Street Journal named it one of the four leading regional theatres in the United States, along with our other favorite here in Florida, Dramaworks.  You could say we have the best of both worlds, having seasonal access to each. 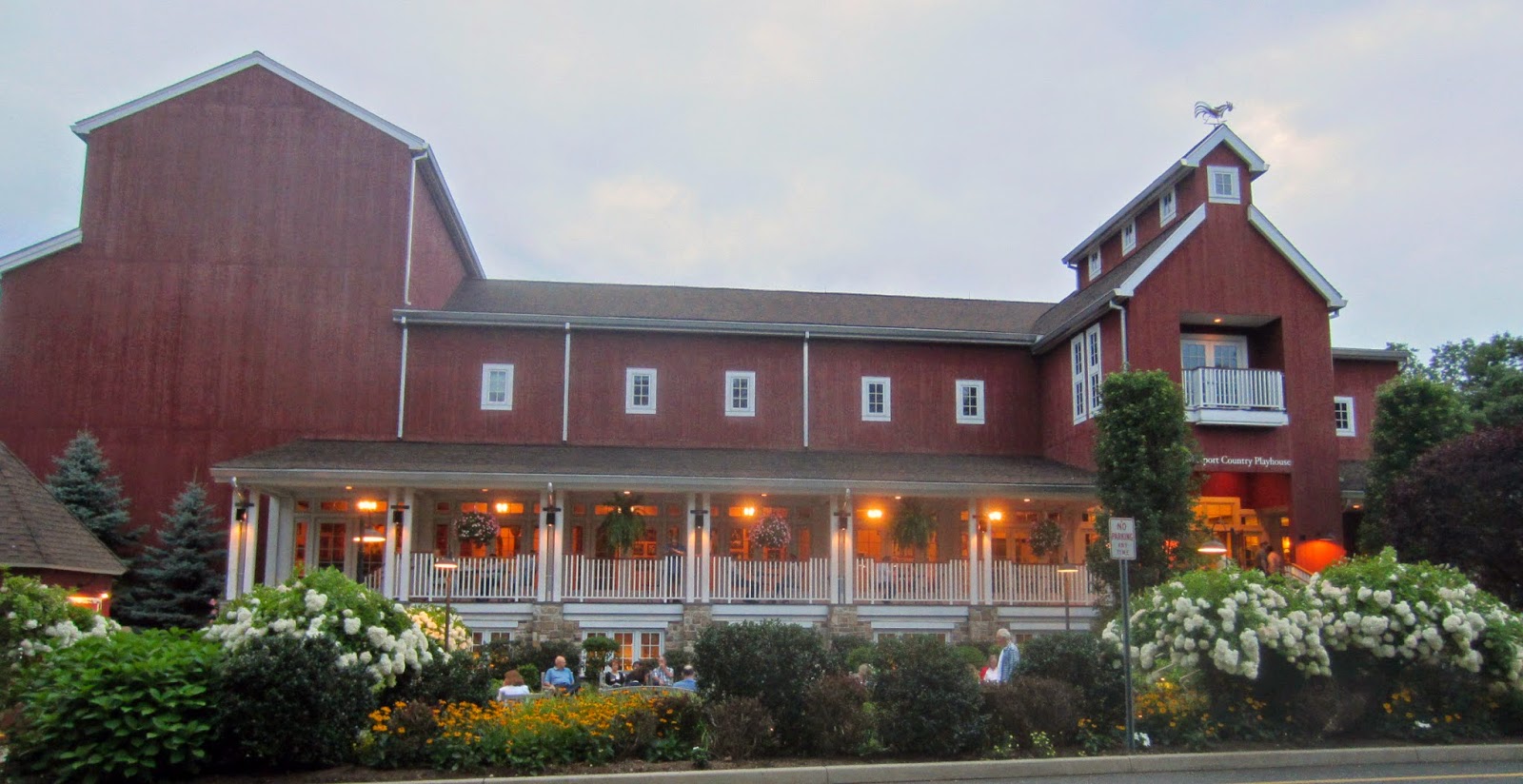 The current production at WCP is Alan Ayckbourn’s Things We Do for Love, a typical Ayckbourn play exploring relationships with a comedic touch. Perhaps not as well known as his Absurd Person Singular, The Norman Conquests trilogy or Bedroom Farce, all of which we’ve seen over the years, either in London, Westport, or NY,  this play has that distinctive Ayckbourn signature, and as a later play, perhaps a bit more maturity. 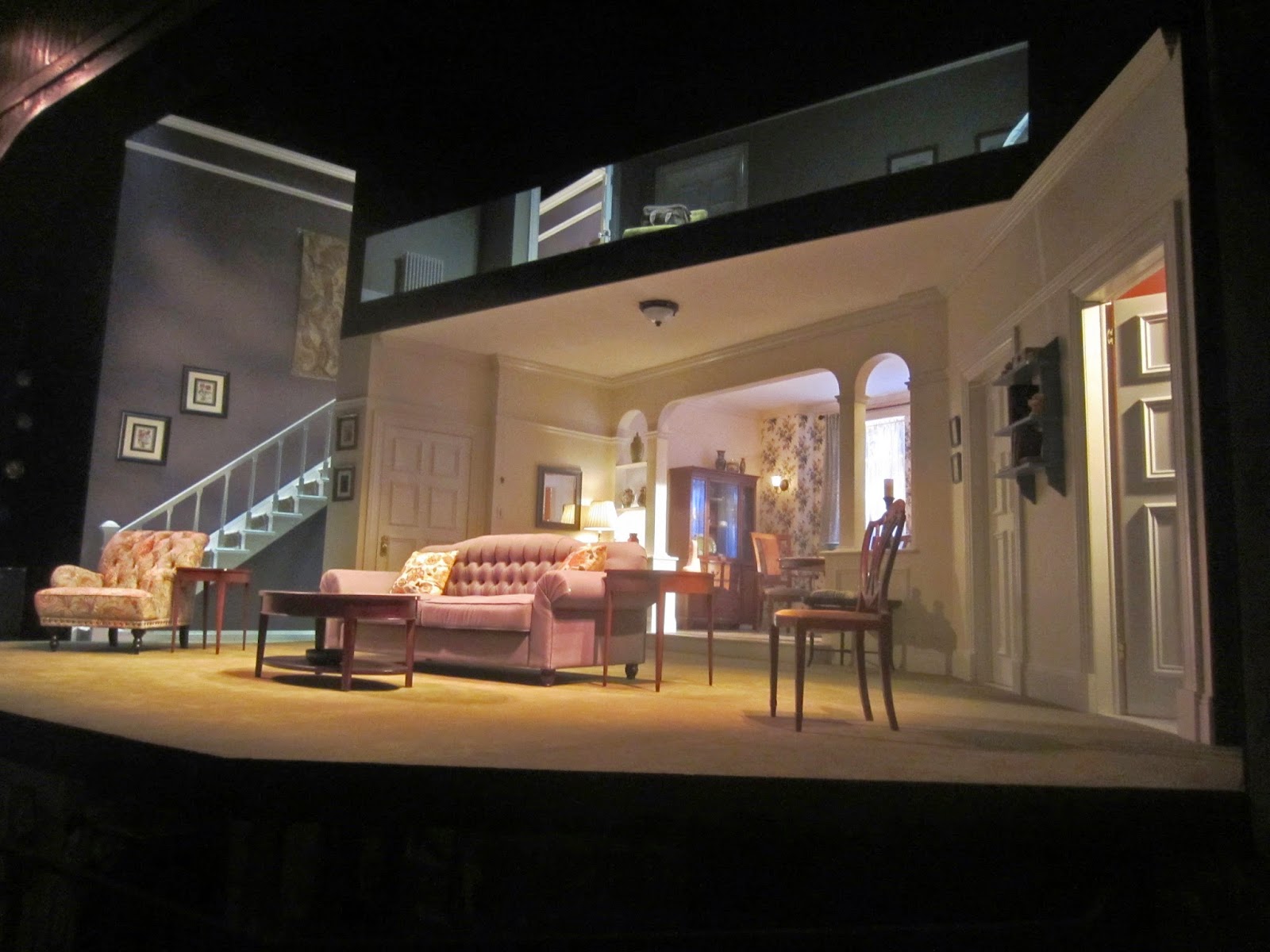 The set itself (and the photograph fails to do it justice) is actually on three levels, the living room being the main one, in the home owned by Barbara, a professional woman, dedicated to her job as an executive assistant. The basement flat below is rented to a postman, Gilbert, who also serves as handyman plus having a crush on Barbara (of which she is unaware).  Barbara is 30-40 something, and being visited by her high school friend, Nikki, who is in love and in fact engaged to a Scotsman, Hamish.  Barbara has agreed to sublet the upper flat to them while their house is being renovated, and this level, too, can be seen by the audience.  Barbara and Hamish take an instant dislike to one another. Need I say more?  So the play takes place on multiple levels -- physically and metaphysically -- with interesting and entertaining twists. In the course of the evening, we learn much about the “things we do for love.” 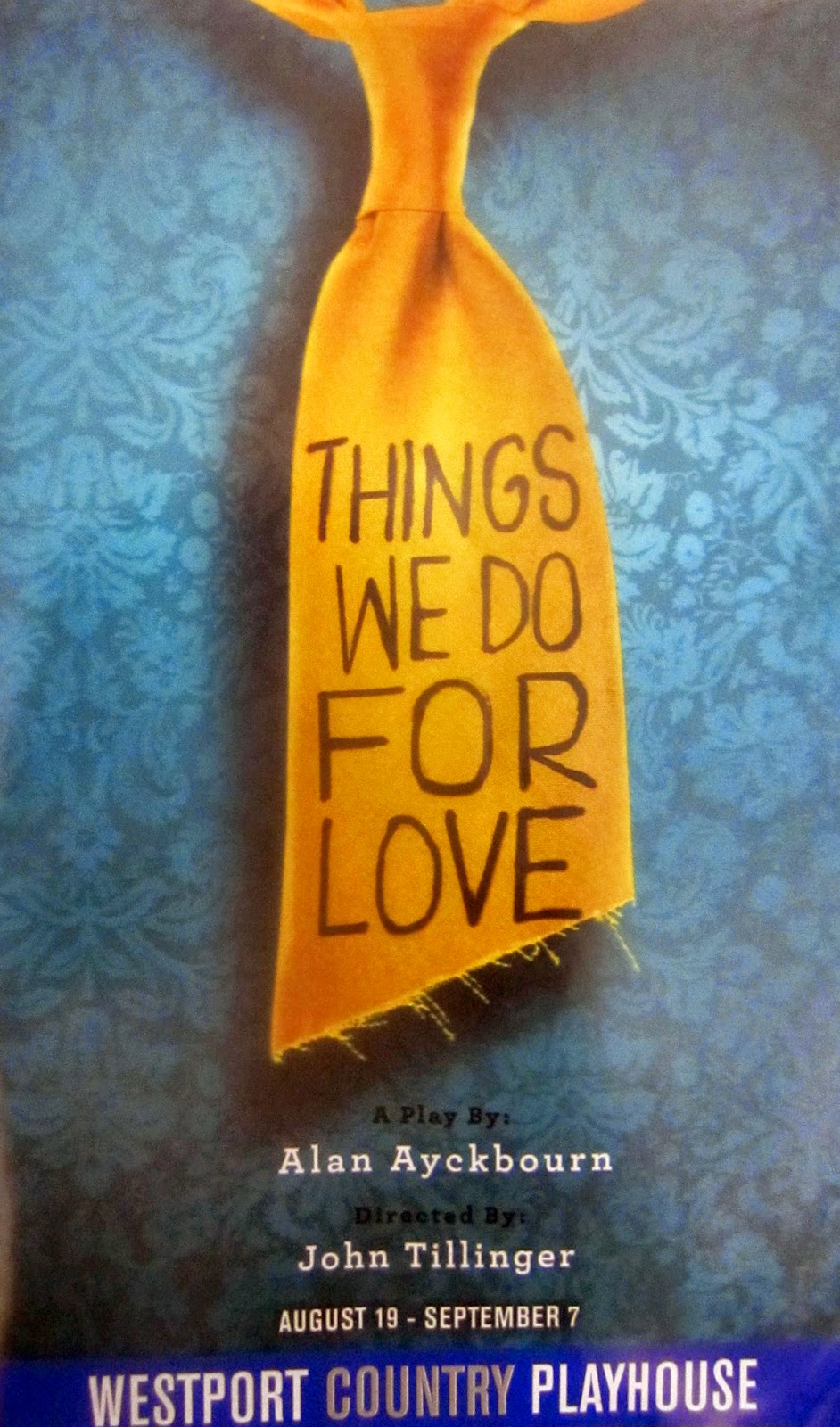 Part of the success of the Westport Country Playhouse’s production is its fine casting; I think a hallmark of both WCP and Dramaworks.  I could single out Michael Mastro who plays Gilbert for special recognition, a difficult role to play.  But all – Geneva Carr as Barbara, Matthew Greer as Hamish, and Sarah Manton as Nikki – are first rate, and make this a memorable production, under the fine direction of John Tillinger.  And kudos to James Noone for his scenic design.

Ayckbourn once said “The joy of the English language is its infinite capacity for being misunderstood.”  Indeed, and how lucky we are to have a playwright of his stature still in our midst.  While viewing his plays, one has the impression one is experiencing a light farce, but his plays linger in one’s mind, a testament to the more substantive themes he weaves with his unique comedic touch.

By the way, I wrote this before a review appeared in yesterday’s Wall Street Journal.  Terry Teachout essentially agrees with me!

The following morning we were on the road returning to Florida.  At the last minute we decided to take a detour to Thomas Jefferson’s Monticello.  We had never seen this UNESCO World Heritage Site and it had been on our so-called bucket list.  We heard that they now conduct smaller tours of the home which, for the first time, includes the upstairs and the dome and decided that was for us. 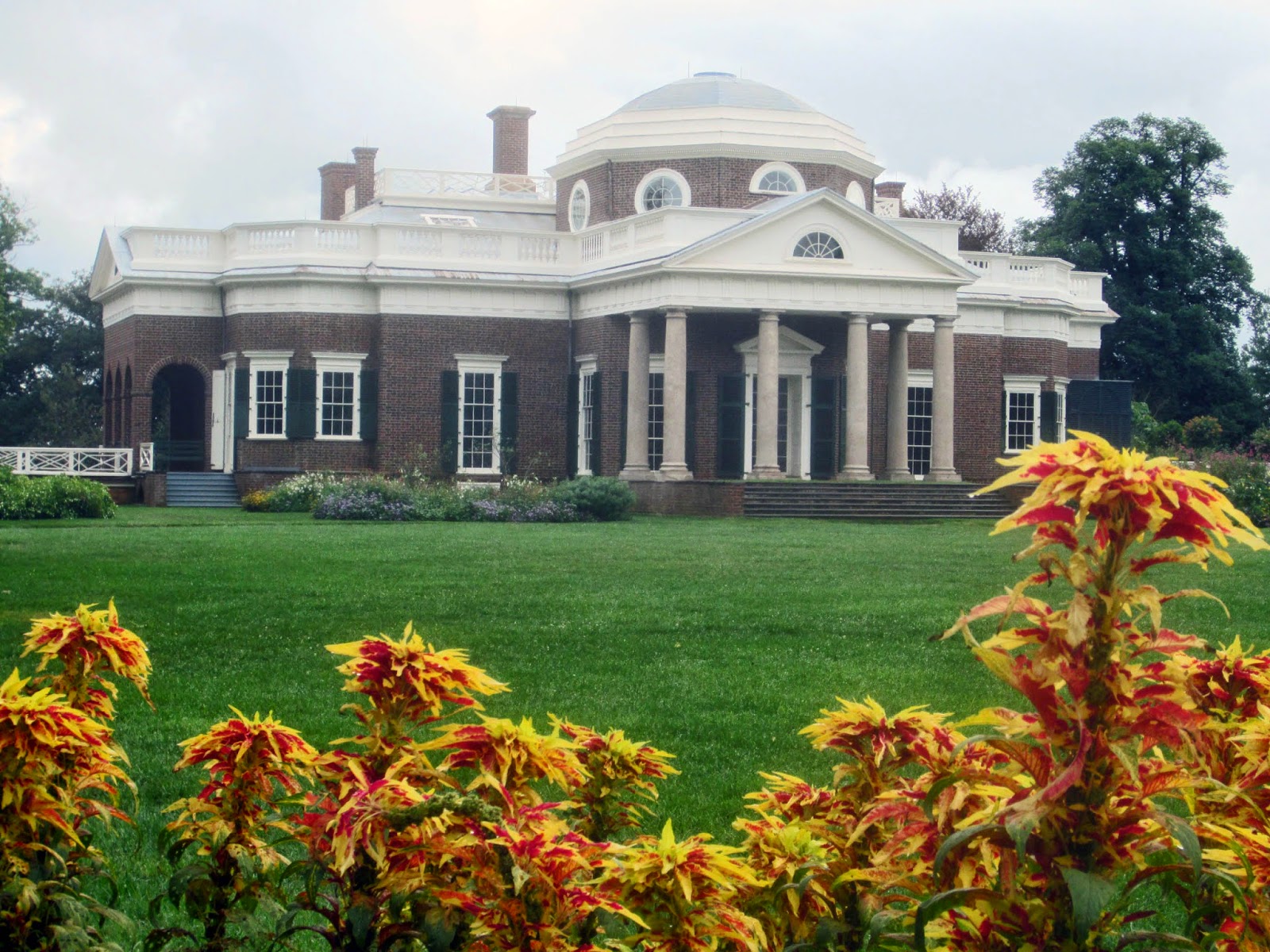 It was fascinating to see Jefferson’s use of octagonal forms in his designs such as the dome room and many of the bedrooms.  Unlike most of the home where photography was forbidden, we were able to photograph this part.  His use of a skylight was radical for the time. 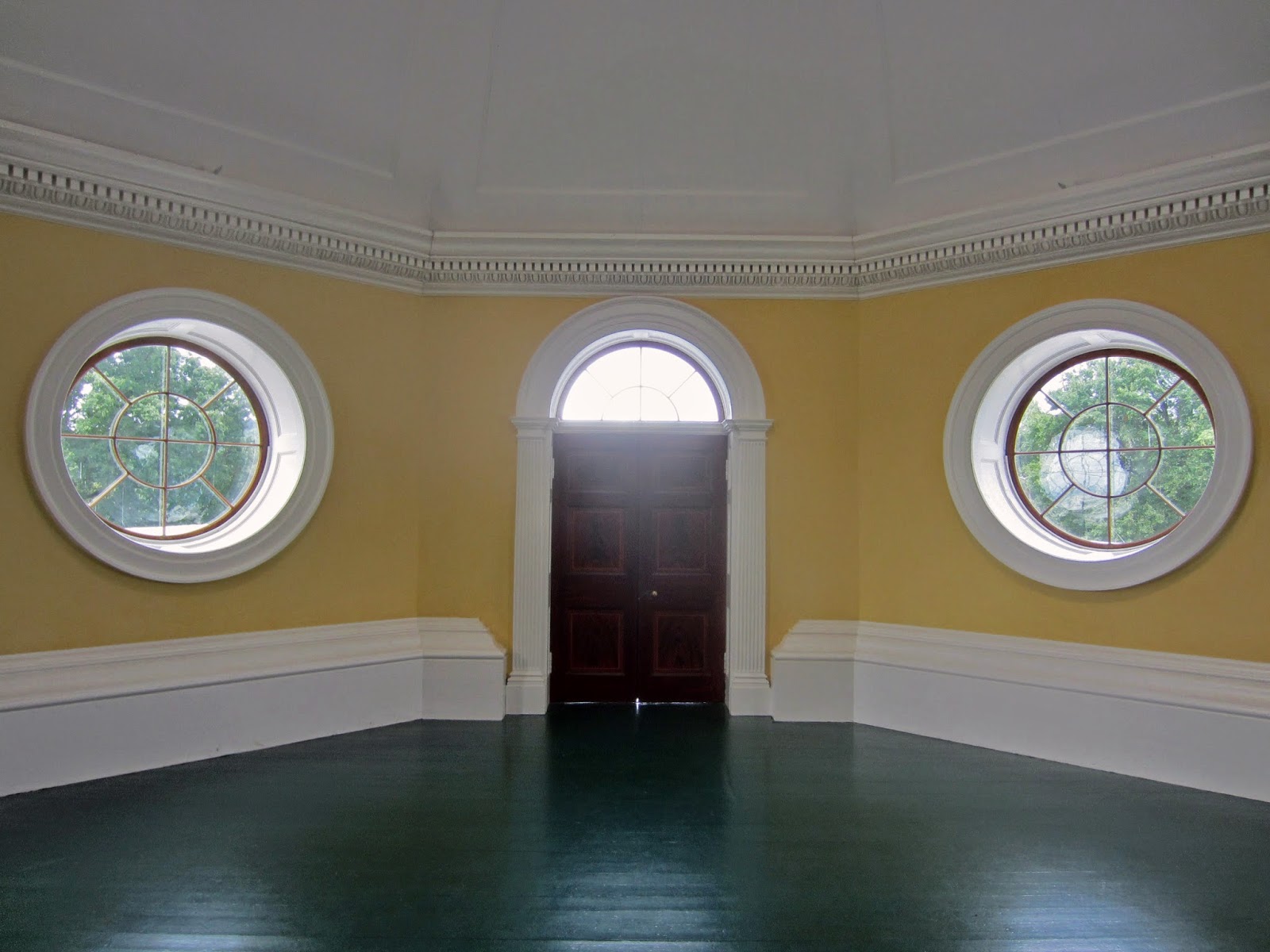 We are glad we booked this “Behind the Scenes” tour, arriving early in the morning before the crowds, being able to more leisurely appreciate the genius of the man, a self trained architect as well as author of the Declaration of Independence.  Did he know no earthly bounds?  Surveying his land and buildings, one can say that indeed necessity was the mother of invention.  Jefferson knew how to produce what he needed from the land to transform his entire estate, using his imagination and stunning ingenuity. 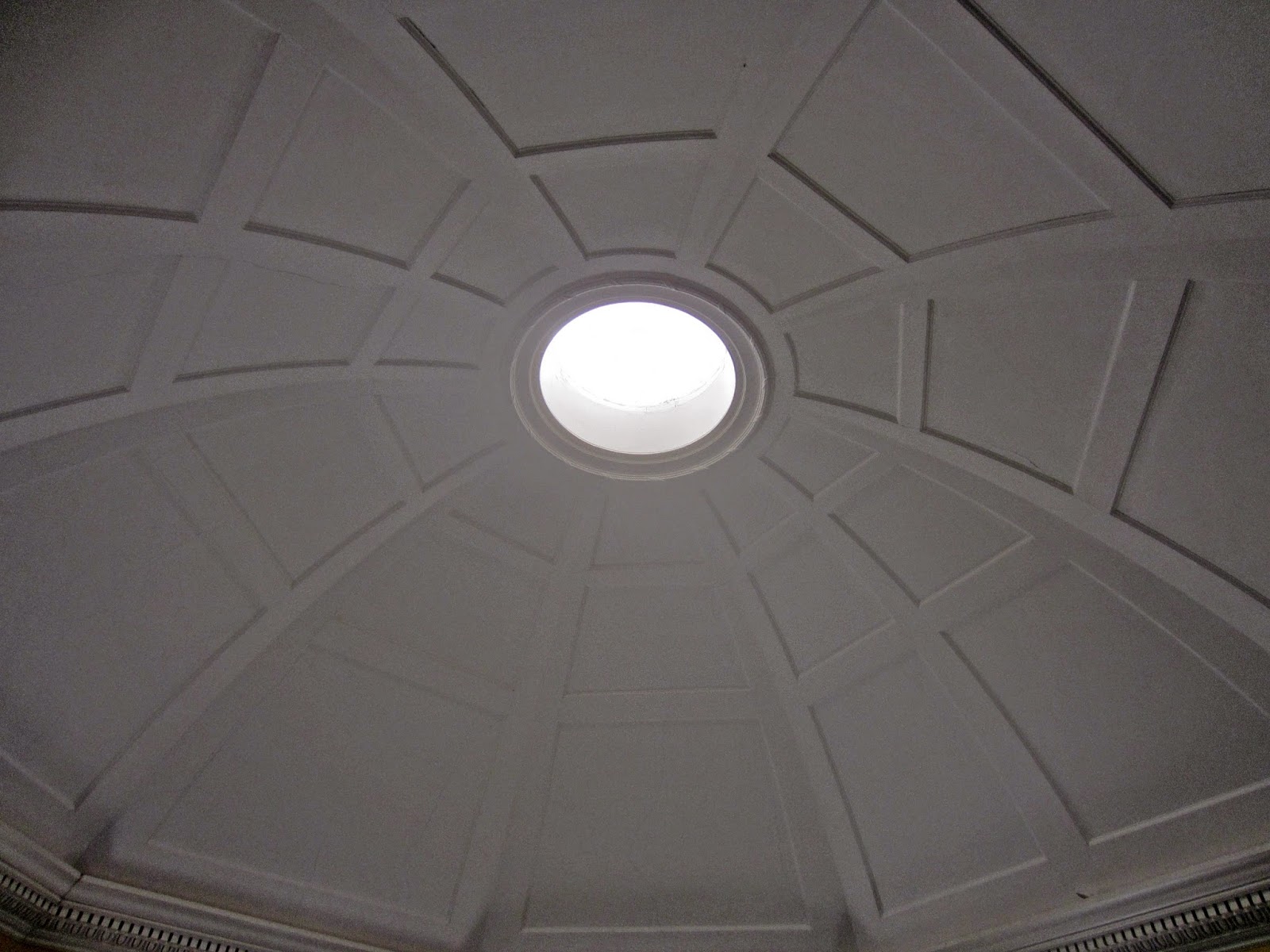 I suppose the only blemish on his reputation was his adherence to slavery, something he knew was wrong, but as it was such an ingrained part of the American south at the time, he felt powerless to change it.  Let another generation do it, he thought.  When one thinks that as recently as the 1960s we had segregated facilities in many parts of the US, one can appreciate the enormity of the conundrum.

Besides the grounds and his home (of course the focal point of the visit) we were impressed by The Thomas Jefferson Foundation’s wisdom in setting up the visitor’s center a short shuttle ride from the plantation, with a 20 minute introductory film, museum, a well stocked restaurant, and a beautiful shop.  From there it is but a 5 minute shuttle ride to an experience of a lifetime.  The small carefully timed tours were especially appreciated. 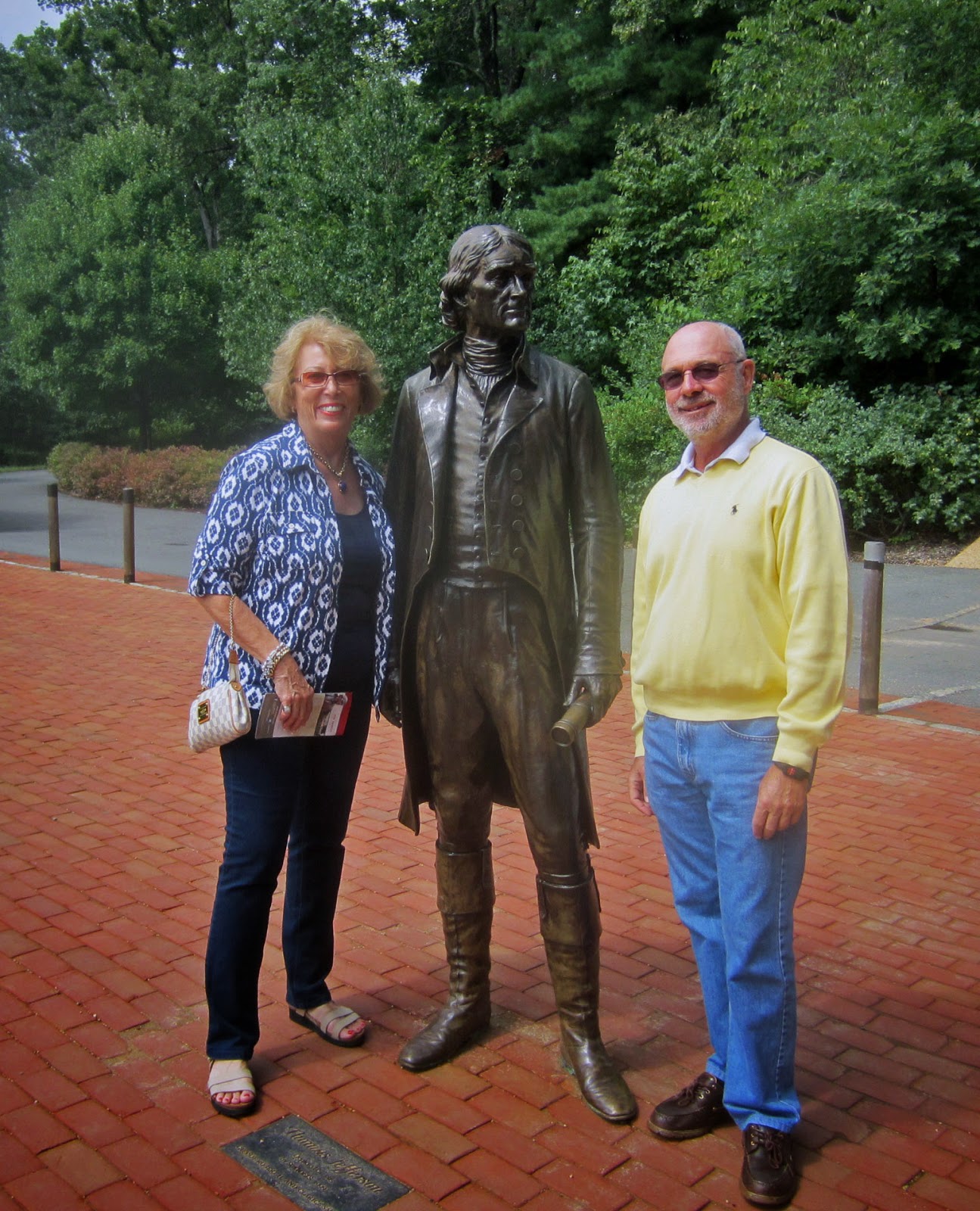 It reminded us of visiting The Biltmore in Asheville, and the neighboring Carl Sandburg home in Flatrock, NC.  The Jefferson plantation had the intimacy and livability of the Sandburg home and grounds, and, as a self sustaining home, a little of The Biltmore, but not the grandeur.  However, if one considers accomplishments of the intellect an element of grandeur, Monticello soars

Since we started out early for our tour of Monticello, and we were now continuing on our way to FL, we thought we’d push on setting a target for Florence, SC for the night.  We understood our friends, Harry and Susan, were on their way north and that’s where they normally stay for the night, so wouldn’t it be fun if we met there for dinner?  We knew where they were staying, so we called while on the road and booked a room there. We were driving some 475 miles from the northwest and they some 575 miles from the south.  We both arrived within a minute of each other!  If one had planned to meet that would have been impossible timing.  It makes one believe in serendipity.

It was fun to catch up with each other after being away for nearly two months.  The next morning we left the hotel at 5.30 am.  Great to get some miles under our belt at that time while I95 is nearly empty, except for the trucks of course.  By 3.00 PM we were home, sadly leaving our other life behind at the South Norwalk Boat Club in Connecticut. 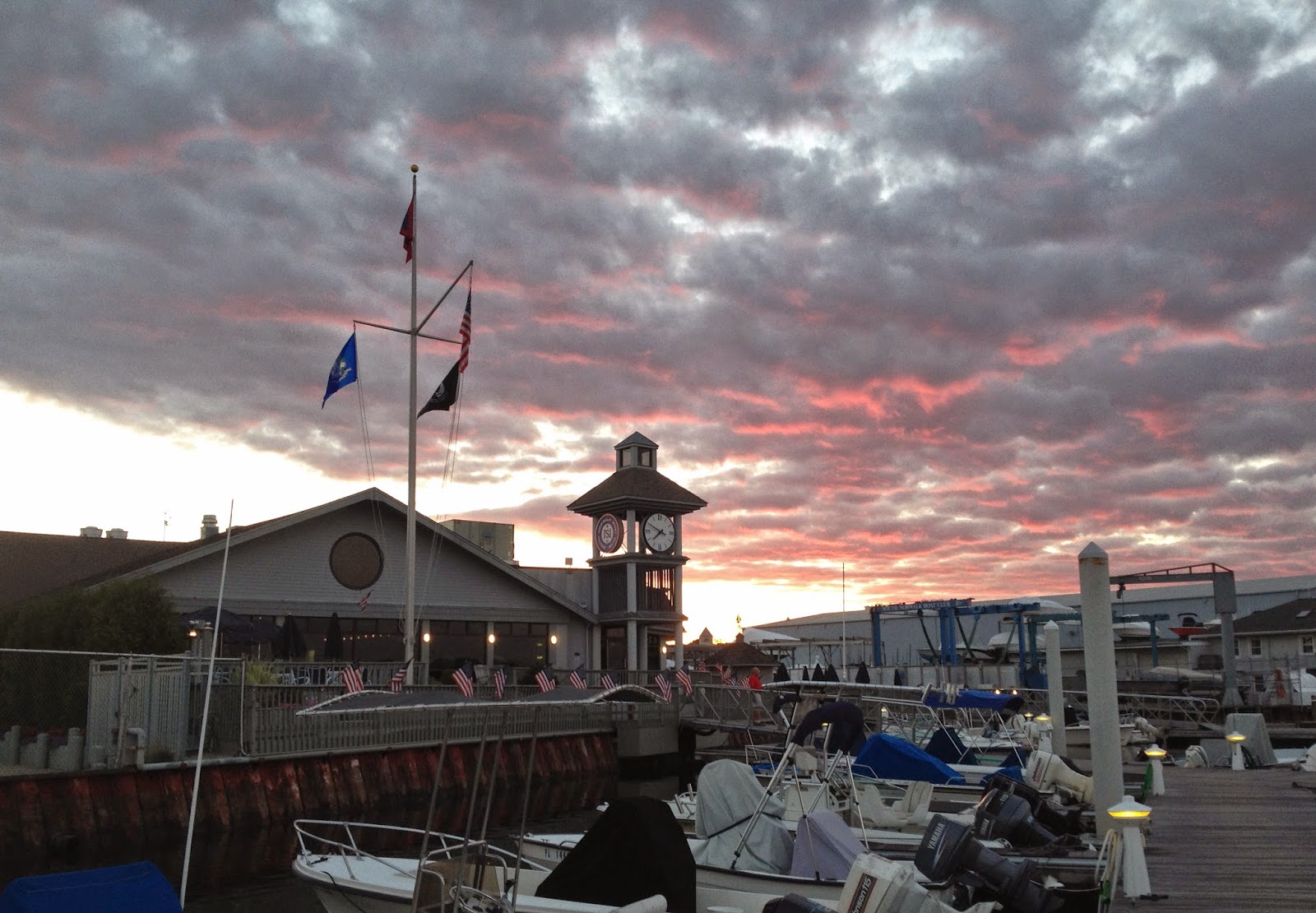 But wait ‘till next year!