As I mentioned in an earlier entry, my wife, Ann, left on a long-ago planned three week tour with Overseas Adventure Travel to Thailand, Laos, Cambodia, and Vietnam in late January, where – except for the hotels they stayed in – they sort of roughed it, on the go all the time, five short flights, and a tight schedule.  OAT does it right, putting together small groups for these trips and involving them with local people, their families, schools, in addition to seeing the sights.

She wrote some very descriptive emails to me each night, which we've both edited for posting here. This is the first part, covering her adventures in Thailand.  Over time I will have three additional entries.  Unfortunately her camera was ruined so she had to use her iPhone and as she began to run out of space she emailed the photos to herself.  Because of Internet constraints and the poor quality of some pictures, I've worked with them in Photoshop and hopefully have brought out the best of what she took. 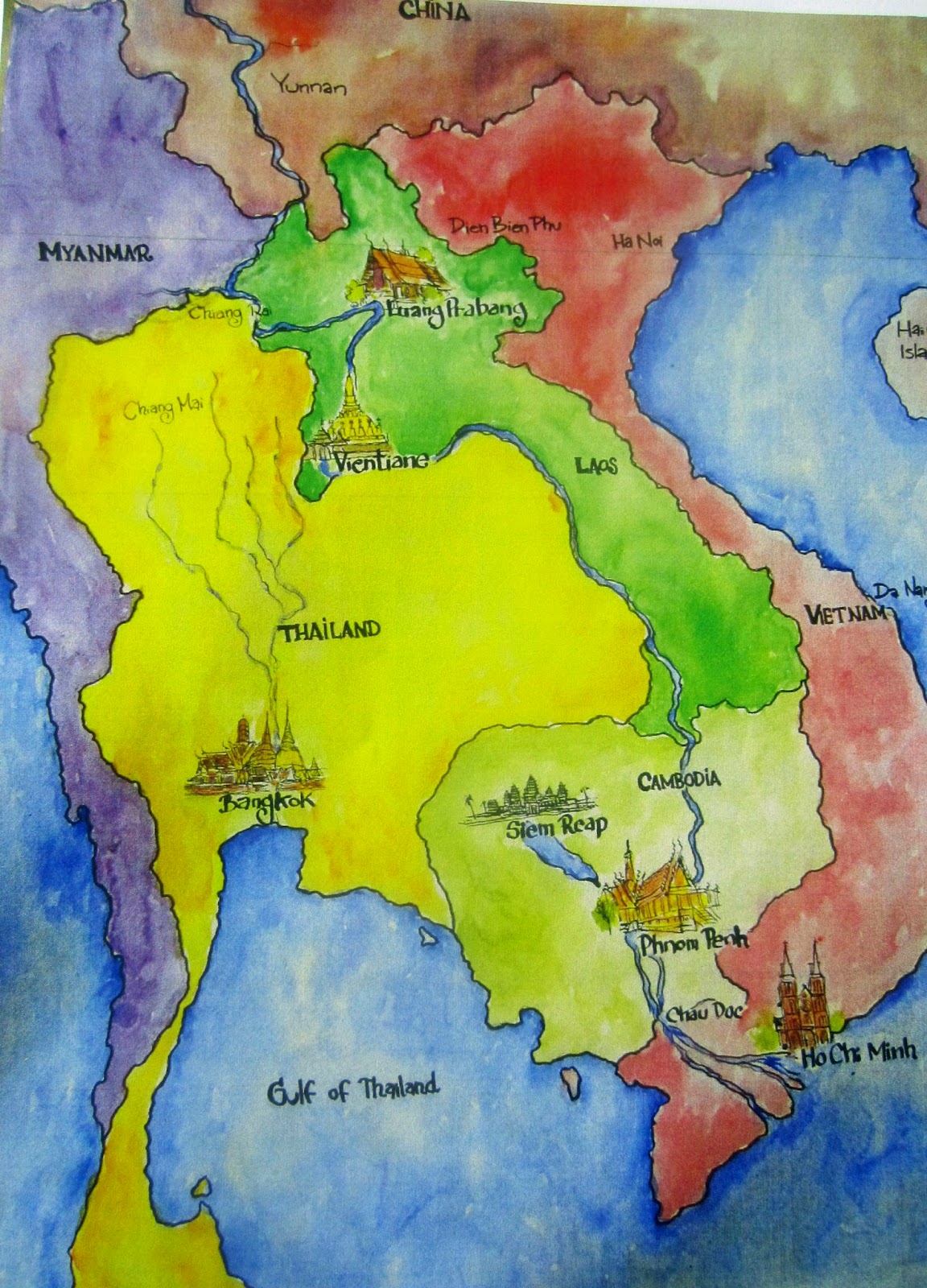 After my unforgettable adventure in India a few years ago, I thought I might be ready for another exotic trip to a part of the world I had never visited, S.E. Asia!  Although years before Bob and I had spent almost a week in Singapore and I had traveled into China, first with a friend and a couple of years later, alone, I was curious to explore four new countries this time, Thailand, Laos, Cambodia and finally Vietnam with a group of like-minded travelers.

The travel company called OAT, for Overseas Adventure Travel, had served me well in India and so I booked their 19 day fully escorted trip they called, “Ancient Kingdoms”, taking advantage of their “no single supplement” policy since Bob was not joining me.  I would be meeting the 13 other Americans who would be my travel companions once I arrived in Bangkok.

Our first morning, we all gathered for a 9:00 AM meeting where I met Ole, our Thai Trip Leader who would coordinate every step of the way, and the rest of our group, several from California, six from the Washington/ Virginia area (who all knew one another), two from Ohio and two from RI.  And then there was the lone Floridian, me.  Many turned out to have been all over the world, some retirees from important careers, two Doctors, an Artist, others with a strong yearning to explore new places like myself, but all came to be comfortable fellow travelers, prompt and flexible, curious and intelligent.  As I was soon to learn, we formed into a cohesive group fairly quickly, teasing and laughing and enjoying one another's company.  Although there were 6 of us singletons, we mixed and mingled easily, making the entire experience a pleasure for all. 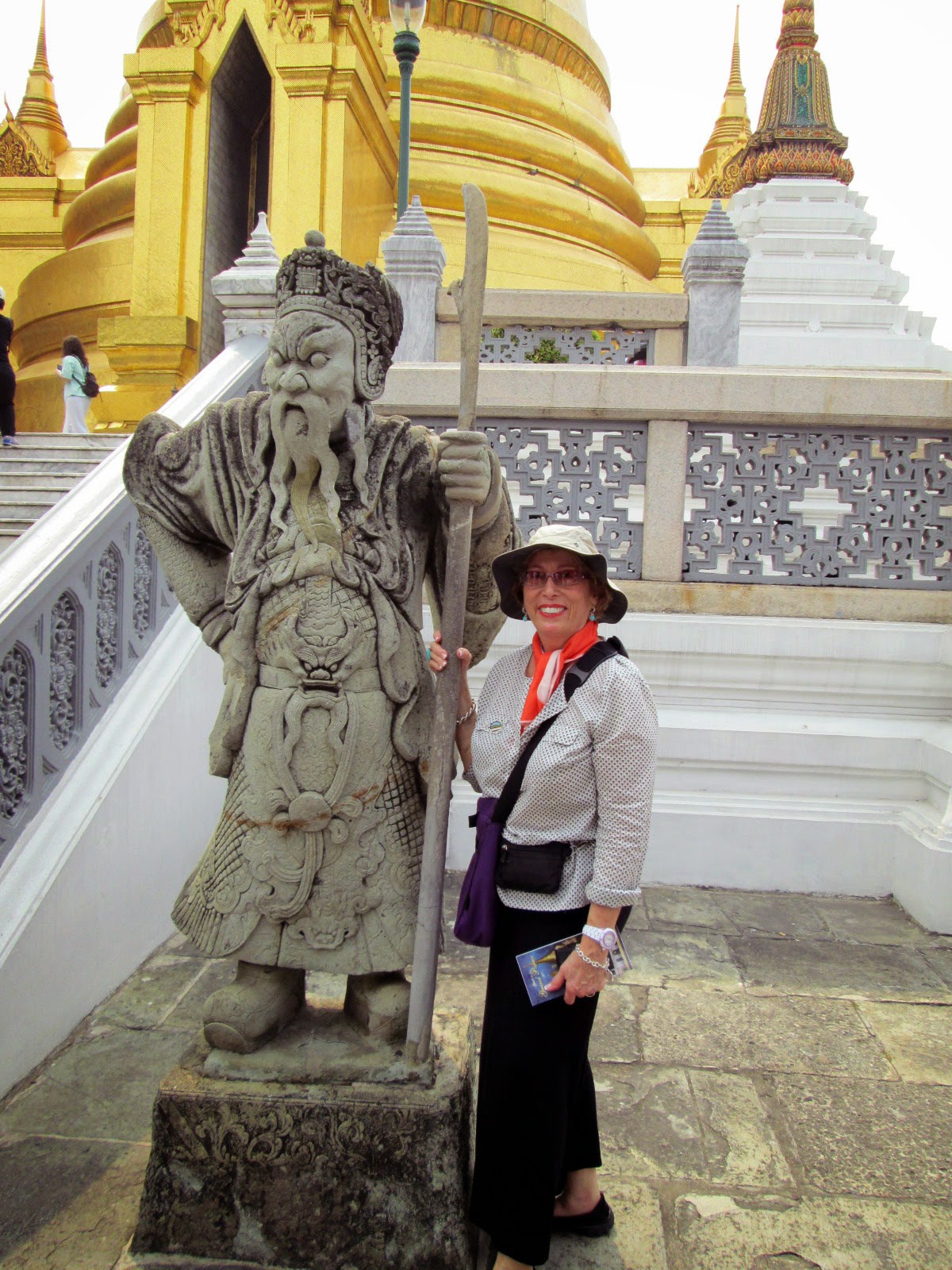 As soon as our orientation briefing was over, we all piled into the first of many air conditioned buses waiting outside our Hotel to take us to the Royal Grand Palace and Temple of The Emerald Buddha, to see the most sacred Buddha image in Thailand. Wat Phra Kaew is regarded as the most revered Buddhist temple (Wat is Thai for temple) in the entire country.  In fact, the temple does not house monks but rather serves today as the personal chapel for the Royal Family. It was oppressively hot and humid and along with the literal throngs of people – local and foreign - at the Royal Palace, we all slowly shuffled along in the heat, jockeying to take photos. 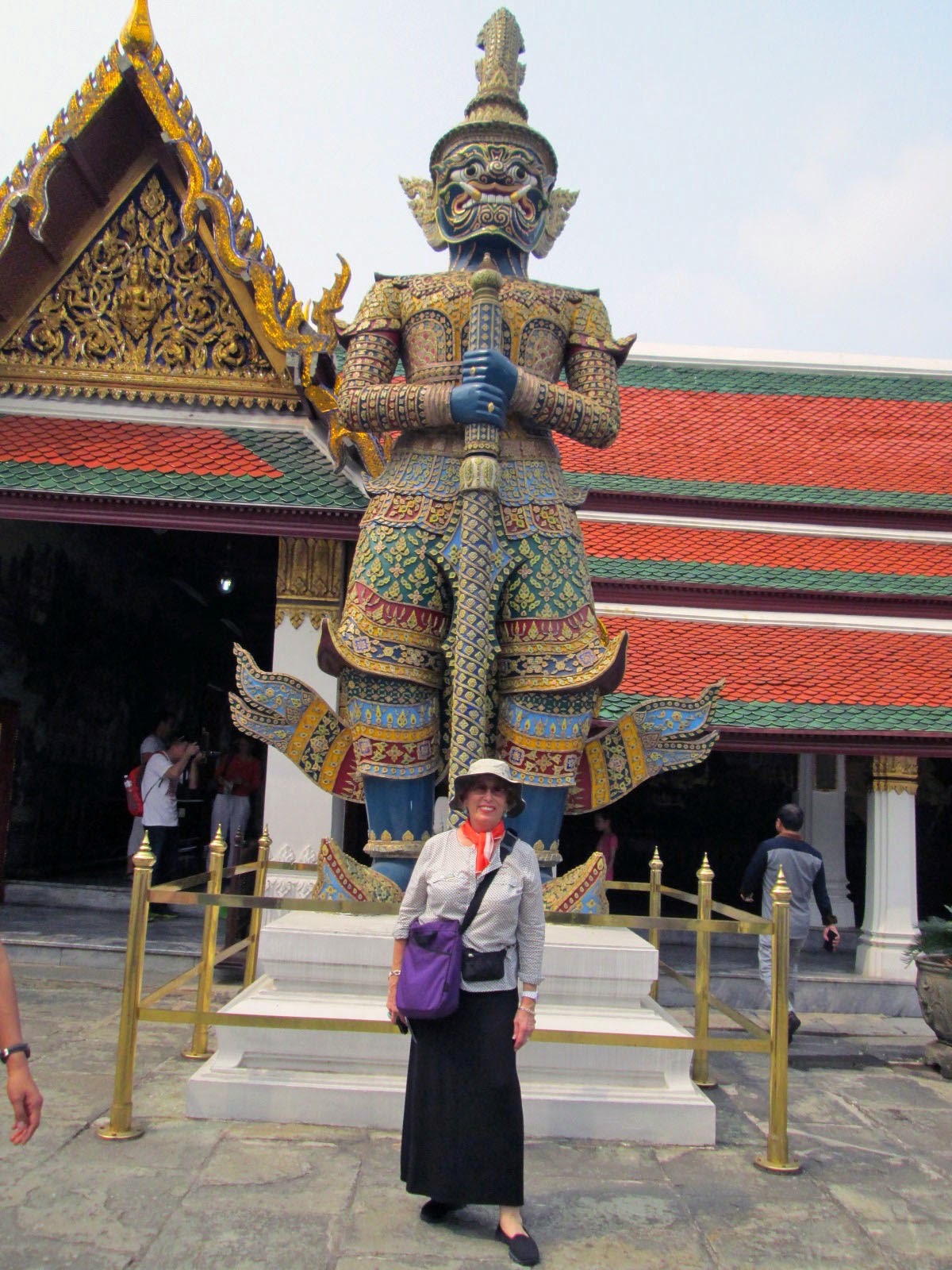 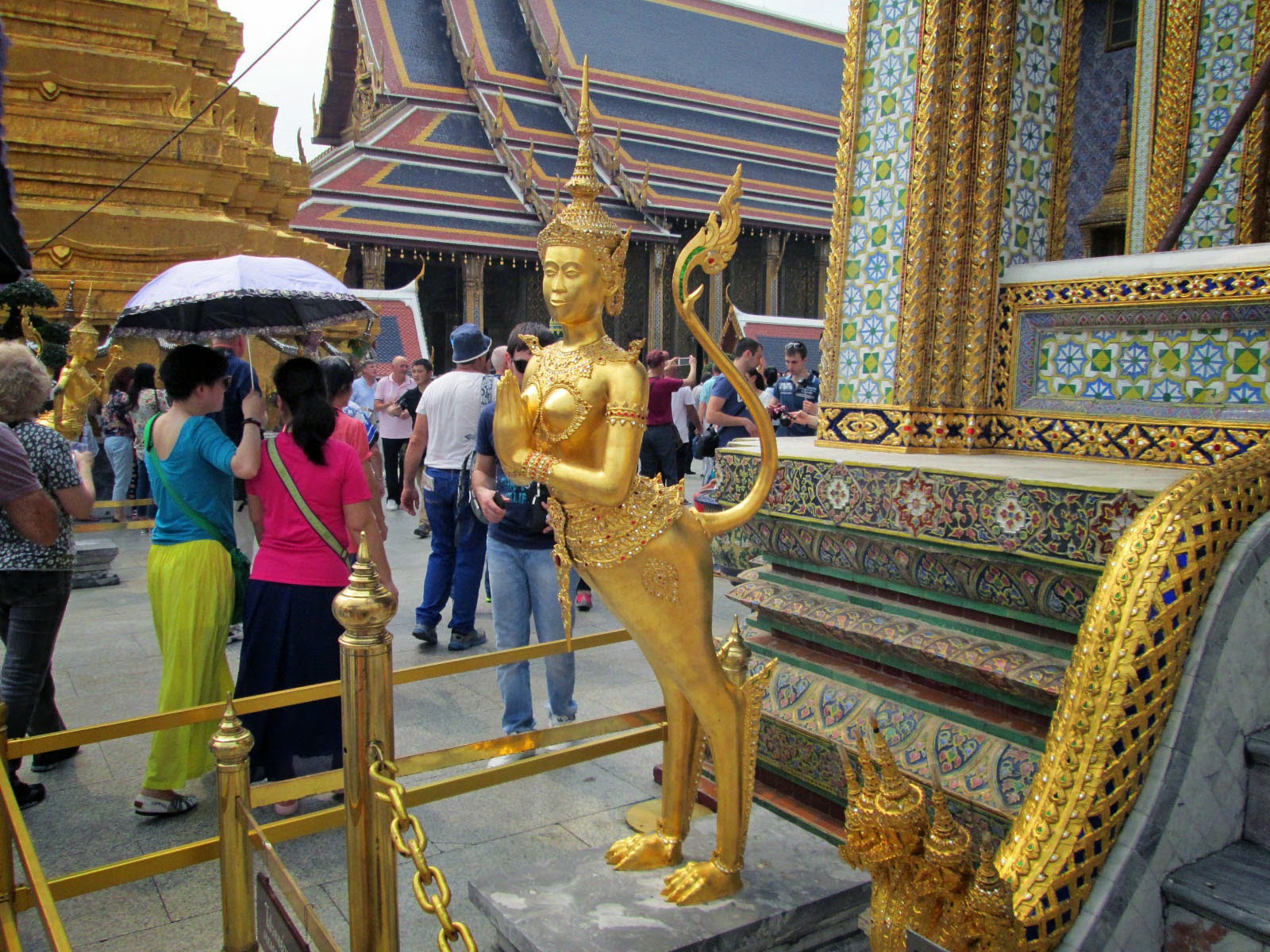 I was expecting to see an impressive Emerald Buddha but have to confess that I had no idea he would be so small and sit so high up on a dazzlingly bejeweled pedestal so far away that craning my neck for a good look was almost impossible.  Of course we were not allowed to take any photos, but in truth there are various suggestions that the statue, about 30 inches tall, is not Emerald at all but rather made of jasper or even jadeite.  The reality is that the Emerald Buddha has never been tested and thus its exact composition is as great a mystery as its origin. This statue, however, is so honored that the King of Thailand, himself, changes the Buddha’s garments with three sets of gold clothing for the three seasons, summer, rain and cool weather.

An hour later, everyone was soaking wet.  I had a paper fan and a very thin cool cotton top on plus a cooling towel around my neck, but it was still a harsh experience and when you factor in major jet lag (we were 12 hours ahead of the East Coast time and had lost an entire day crossing the International Dateline) with almost everyone in my group (except me, coming in by myself at 7:00 AM the prior morning) having arrived in Bangkok around midnight the night before, you can imagine how we were all beginning to wilt!  But the mere mention of driving off for an air conditioned lunch break put everyone back in a jolly mood. 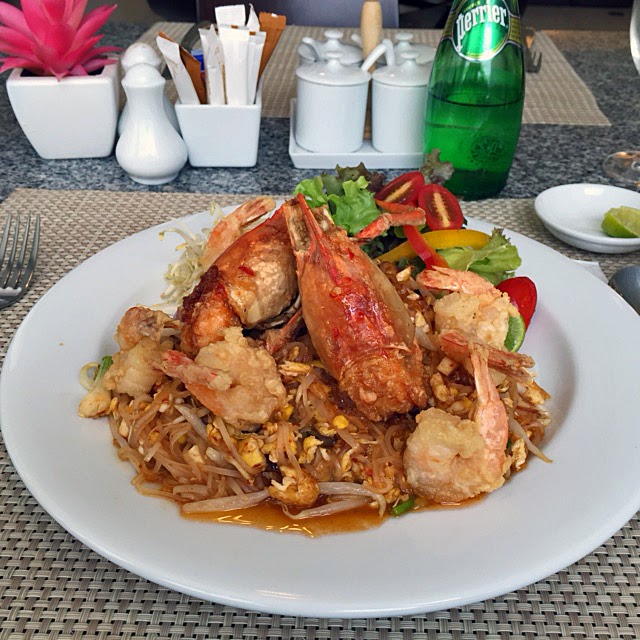 Our first meal together was a delicious lunch at the scenic Mango Tree Restaurant alongside the Chao Phraya River.  This set the tone for the majority of our meals to come, which I must admit were mostly outstanding and featured picturesque settings and good fresh local food.  (Just the day before, I dined alone in the Hotel Restaurant and enjoyed the most incredible Tom Yom Goong or soup which is a “spicy hot” concoction with shrimp, mushrooms, peppers and cilantro which nearly blew the top of my head off followed by a Shrimp Pad Tai that held the prize for the best Pad Tai I had ever eaten!) For our lunch that first day, I had a wide flat fried noodle dish with soy sauce called Pad Si-Ew with tender chicken & a delicious fresh salad.  Yummy.

That night, we all enjoyed a Welcome Dinner cruise on the Chao Phraya River where we were served another beautifully presented dinner with tasty dishes.  Now we were beginning to get to know one another and even remember each other’s names!  It helped that everyone was very friendly and looking forward to our travel adventures together!  Our laid back Leader, Ole, was showing off his delightful sense of humor and we were all starting to relax. 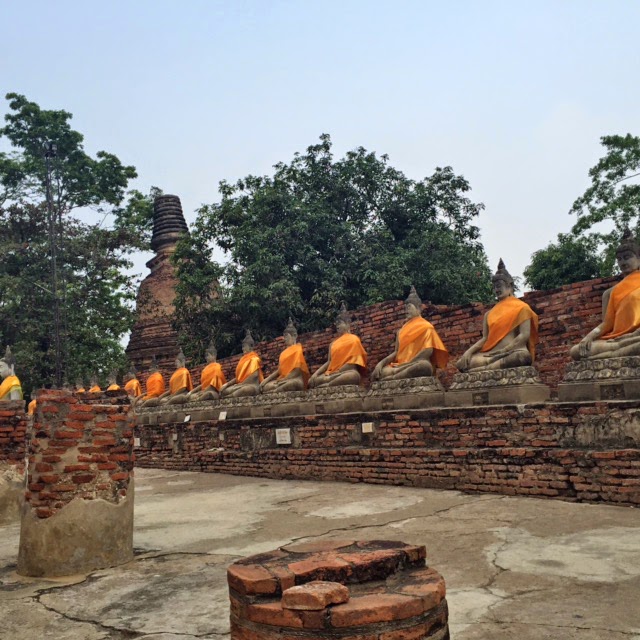 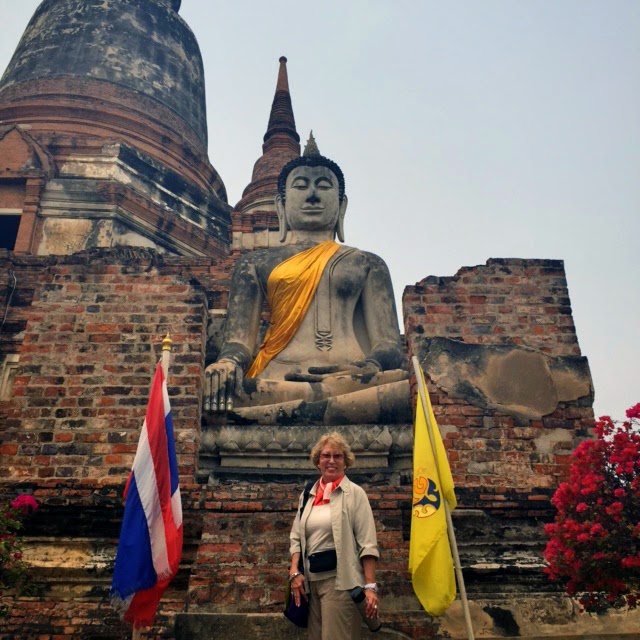 The next day, we had our first really long bus ride to the ancient city of Ayutthaya, a UNESCO World Heritage site that was home to 33 kings from many different dynasties.  Here we visited Wat Yai Chai Mongkol which is flanked by a row of Buddha statues, all draped in their saffron robes.  The original stones were first laid in 1357, yet still functions as a meditation site to this day.  More walking in the oppressive heat, all of us soaking through our clothes, on to explore the ruins at Wat Phra Sri Sanphet, another temple complex.  At this point, we were all looking forward to stopping for a cool lunch break which did not disappoint.  We enjoyed another tasty Thai meal which began with a delicious soup in addition to many varied dishes, served family style.

After lunch we hopped aboard a motorized long-tail boat with a bit of cooling breezes which took us to a small village where we walked to a Muslim mosque and met the Imam's representative, Mr. Mart, for an enlightening discussion & tour of the temple.  95% of Thailand is Buddhist, but Muslims coexist peacefully.  Finally on the bus again for a restful one hour air conditioned ride back to our Hotel, The At Ease Salandaeng. Back in our rooms, with time for a quick shower, we then  met for dinner at Le Siam restaurant. Here we were served the most imaginative looking dishes, such an astounding variety and all tasted as good as they looked.  Margaret, (who came with very old friends from the Virginia contingent), and I soon bonded over beer!  At every opportunity, she and I shared a bottle of the local beer, huge ice cold bottles that neither of us could possibly drink by ourselves, but a treat to split and cheap as dirt.  Every time we ordered one, it cost us each a whopping buck.  In Bangkok, the beer was Singha, Beerlao in Laos and in Cambodia, Angkor beer.  All absolutely delicious (a drink that went surprisingly well with the spicy Asian food) and turned me temporarily from a Scotch drinker into a beer convert. 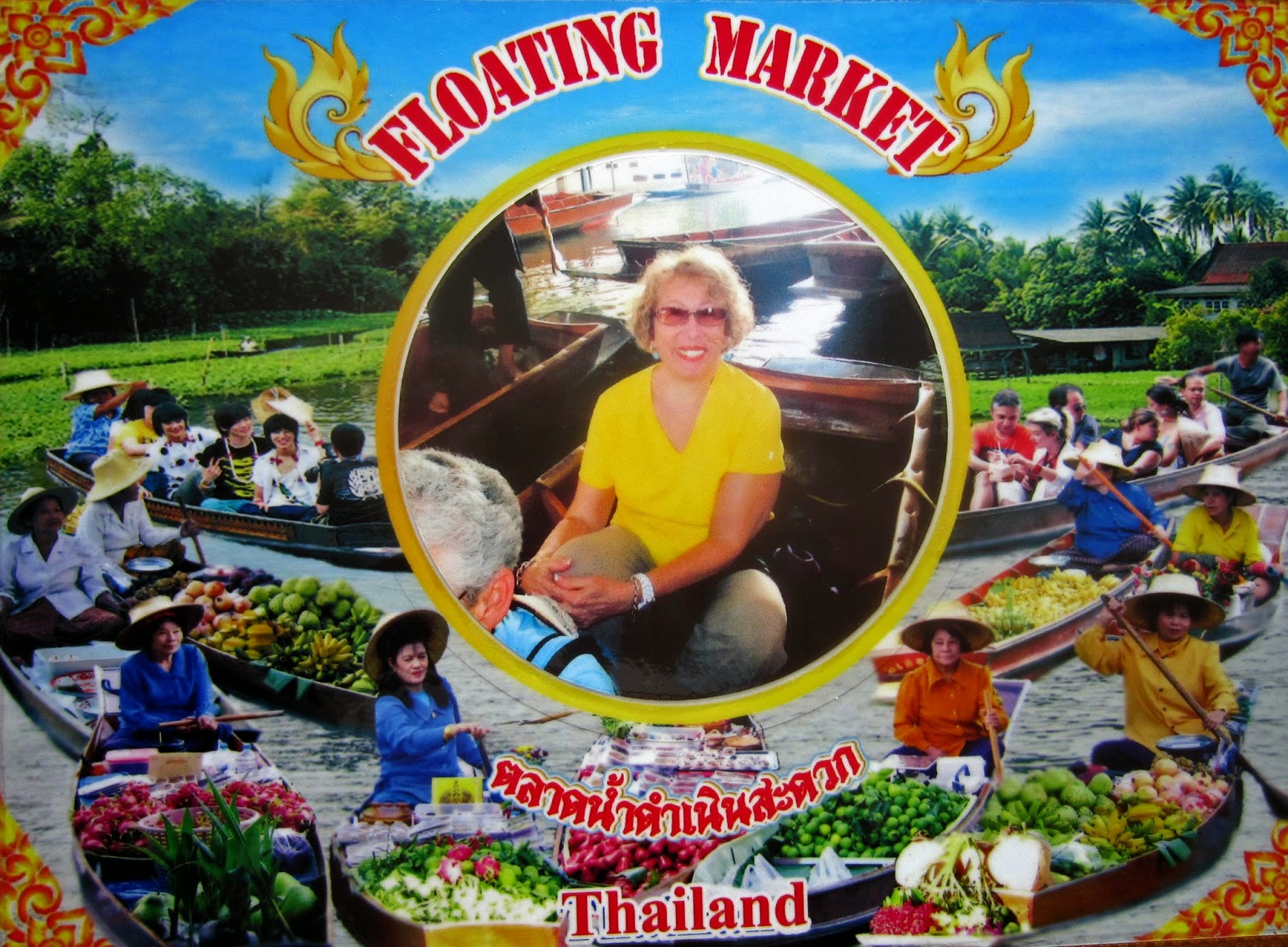 Another early morning wake up, this time at 5:45, departing our hotel at 7:15 for a long bus ride to meet our sampan paddle boat.  Finally we arrived at the Damnoen Saduak floating market, open from 8 AM to 11 AM, which was jam-packed with other vessels & hordes of people!  A chaotic ballet of dodging boats of all descriptions filled with thousands of tourists taking photos in addition to farmers with piles of food, fruit and vegetables locally grown loaded in their boats for sale.  Here anything your heart could desire can be purchased, all from your boat or walking through the crowded stalls.  Afterwards, we took a short bus ride to see how coconut sap is made into sugar & then a long-tail boat ride into a mangrove forest.  We had a bountiful local luncheon on the water with a refreshing breeze & very, very good food.  And let us not forget that icy cold beer! 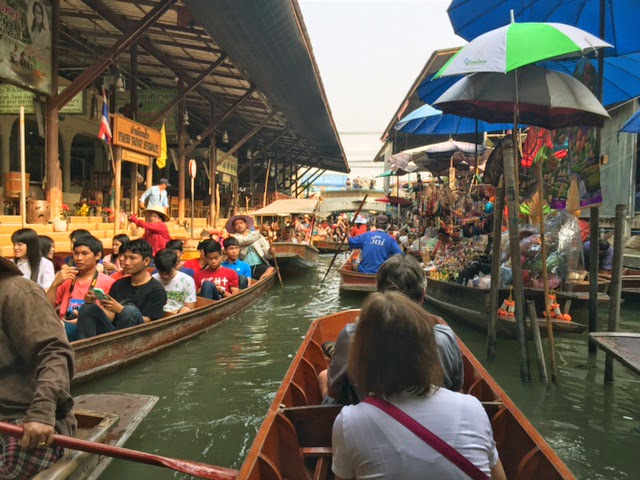 Finally we endured a long bus ride back to our hotel with dinner on our own.  This was the first night we didn’t have an organized meal that Ole had prearranged and so I went back to my room to collapse and thought, good - finally some time to myself to relax and pack and have a quiet evening!  And just as I was thinking, who needed to ever eat again after that filling lunch we just had, the phone rang and my beer partner, Margaret, was inviting me to join her and two others for dinner across the street at a French Restaurant which Ole said was very good. So what else could I say but “yes, I’ll be down in five minutes!”  Ole was right; the food was absolutely fabulous, although my Scotch serving was so miniscule and outrageously expensive, that I forswore ordering it again for the rest of the trip. Stick to beer I said to myself and so I did!

Once back in the hotel, the job of organizing and packing everything that had been strewn everywhere for the four nights at The At Ease became a herculean task and I promised myself to not totally ever "unpack" all my things again.  That was a good lesson to learn and one I took to heart throughout the rest of the trip.  Anne and Kevin I later learned Never Unpack, a cardinal rule they follow that makes very good sense!

So now we were getting up even earlier the next morning and leaving the hotel at 7:00 AM for the first of five flights we were to take over the course of the next 15 days, this one to Luang Prabang, the ancient royal capital of Laos, continued here.