What a cynical title for Samuel Beckett’s brilliant play, courageously presented by the Westport Country Playhouse to celebrate its 80th anniversary. It is not the kind of light fare one might expect on a languid summer’s night at a country theatre far off Broadway, and it was a brave choice by the Theatre’s Artistic Director, Mark Lamos. But this is Westport, Ct - a bedroom community of NYC where we lived for so many years. In fact, we were there during the celebration of the Playhouse’s 40th anniversary – half of its lifetime ago -- so although we are now only summertime visitors, its byways are subliminally imprinted on us.

Edward Albee, one of the many playwrights indebted to Beckett’s trailblazing works, has said “I am not interested in living in a city where there isn’t a production by Samuel Beckett running.” So we’ve been lucky enough to live first in New York City, and then Westport and now the West Palm Beach, Fl area as well, the latter with its Dramaworks Theatre, which produces “theatre to think about.”

And indeed Happy Days is the kind of theatre that one thinks about as much in retrospect as when one experiences it. In fact, I would have been happy to have had a Samuel French edition in my lap with a tiny flashlight to follow what is mostly an uninterrupted monologue. It is so rich in meaning and innuendo. Such a performance requires an exceptional actress and the Playhouse engaged the veteran actor Dana Ivey for the task.

My wife, Ann, had a personal connection with Ivey as they were two of the lead females in their senior high school play in Atlanta, Ga. something Dana Ivey either failed to remember or would like to forget. Ann saw Dana Ivey perform on Broadway with Morgan Freeman in Driving Miss Daisy and after the performance went backstage to say hello and praise Dana for an unforgettable performance. Ann was with two friends. Morgan Freeman first greeted them, said Dana was busy, but would be with them shortly. When she came out, she completely failed to recognize or remember Ann (an unforgettable person), and only vaguely remembered the extraordinary play they performed in or anything else relating to their high school experience. It was a shocking moment for Ann who minutes later laughed it off. I guess when one becomes a Broadway star you can afford to remember the past in any way you choose.

But credit is due Dana Ivy for successfully bringing the audience into Beckett’s abstract world where days begin and end with a school bell and where we are all earth bound in an earth mound. Winnie in the first act sits waist up, at the top of her earth mound, carrying on mostly a conversation with herself, trying to read what is inscribed on her tooth brush and, finally reading the smallest print with the help of a magnifying glass, proclaiming it is another “happy day” as she has learned something new. Talking validates her existence as does the large black handbag at her side filled with her possessions. These are symbolic of our own possessions we tote around during our lifetimes, things that really own us than we them. She reminds us that these things “have a life of their own.” She arranges and rearranges the contents of her bag during the play which prophetically includes a pistol, carefully declaring a new place for the pistol which will no longer reside in her bag but by her side.

At one point, the earthbound Winnie ebulliently declares that she feels it is such a “happy day” that she should be able to ethereally rise into the sky, holding her parasol above her, one that mysteriously burns up and is tossed aside by her. Also, interestingly, except for Willie, her husband, the only other character who “makes an appearance” in the play is an ant, one that Winnie spies with her magnifying glass and carefully follows until it disappears under a rock. We are but ants in Beckett’s universe, but with the ability to talk and, unfortunately, be aware of our own brief, inexplicable existence on this mound called earth.

Meanwhile she directs questions, demands, and criticism of her husband Willy played mostly off stage by Jack Wetherall. Unlike Winnie who is at the top of the mound, Willy mostly lives in a cave and has to be reminded by Winnie, as if he is a child, that if he enters the cave head first he might have difficulty backing out. There is humor in all of this, very dark humor, which takes a darker turn in the briefer second act when the bell rings and Winnie is now buried up to her neck in her earth mound, unable to move anything at all, including her head. (In fact, Beckett in his correspondence with the play’s American director, Alan Schneider, when the play premiered at NYC’s Cherry Lane Theatre in 1961, said of Winnie: “She simply can’t move, that’s all. Times when she can’t speak, times where she can’t move. Her problem is how to eke out, each ‘day’ and organize economy of these two orders of resources, body and speech.”)

It is at this point that Willie finally makes an on stage appearance, a disheveled and shaking old man, formally dressed in spats and tie who grunts and claws his way up towards Winnie, something that pleases her at first, falling back, being egged on by Winnie to try again. Is Willie reaching for Winnie or is it the gun, as the play and their marriage and perhaps their lives devolve to their abrupt end? Lights out. Curtain.

It was a night of powerful theatre. We exited to the parking lot. It had just rained and the humidity hung in the air, also rising off the steaming macadam and fogging our glasses. So we drove the back roads of Westport, returning to our boat, passing landmarks indelibly imprinted and always remembered such as the location of the old Westport National Bank (gone) turning left onto the only road that runs west and parallel to Riverside Avenue, along the southern side of the Saugatuck River, passing homes where we had partied in our youth (including one Christmas eve where guests in an alcoholic induced stupor set a couch on fire and it had to be dragged out to the snow to extinguish the flames), the building our first Internist once occupied (who later died in the same nursing home as Ann’s mother), the Westport Women’s Club where my publishing company held our annual Xmas party for so many years, my old office itself across the river where I worked for the first ten years in Westport, now the Westport Arts Center, past the street where Ann and I went for Lamaze classes when she was pregnant, over the old bridge crossing the Saugatuck, turning left then right under the Turnpike past the structure which used to be The Arrow Restaurant (long gone) where Ann reminded me they made her favorite dinner, crispy fried chicken, and then further west to Norwalk, all fragments of our own earth mound, being earth bound, trying to understand. Theatre to think about. Oh, happy days. 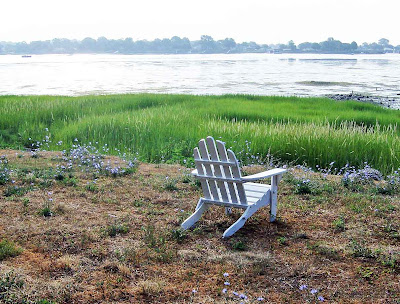