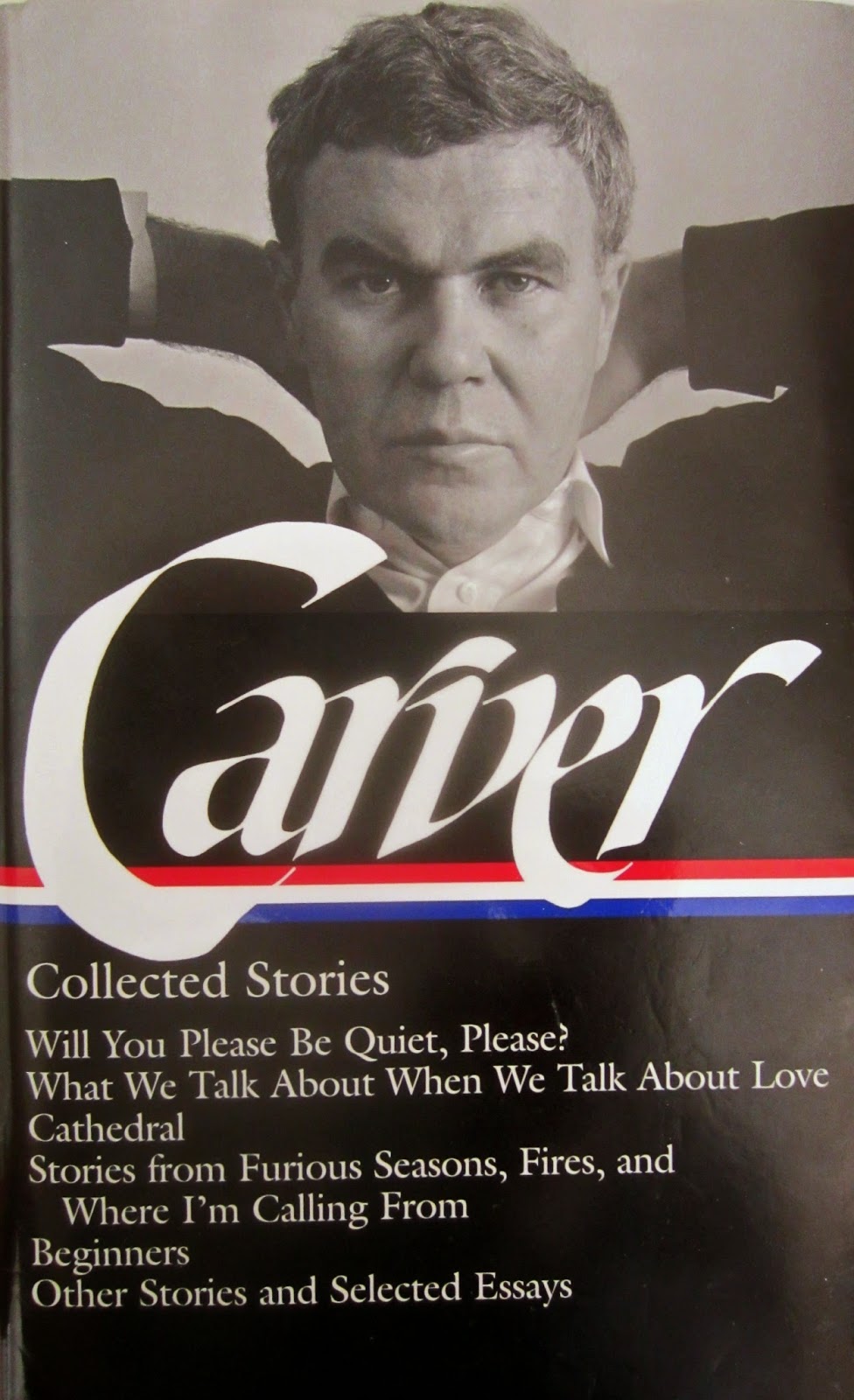 I don’t see many movies in the theater.  I’ll tape (well, DVR nowadays) an occasional classic on Turner Classic Movies, and see a Woody Allen film, or one of that genre, but I prefer live theatre and reading. However, I made an exception for Birdman or (The Unexpected Virtue of Ignorance) as central to its story is Carver’s What We Talk About When We Talk About Love, a short story that resonated so much with me that I  decided several years ago to adapt it into play form along with a couple of other short stores, as part of a larger dramatic work, When We Talk About Carver.

I had thought the time had come for this little known writer (to the general populace) to be acknowledged, celebrated as one of the finest short story writers of our time.  What better way to do it than by developing a dramatization of some of his works, centered on his masterpiece, What We Talk About When We Talk About Love.   This was no small feat for me.  I love the theatre but adapting a short story to the structure of a drama is not for amateurs.  So I loaded up my bookshelves with guides to playwriting and installed some good software, Word.doc templates for dramatic structure and presentation.

Then, when it came to dramatizing the story, there was the conflict of deciding on which version to use, the one Carver originally wrote “The Beginners” and later edited by his editor at Esquire (and later Knopf), Gordon Lish, and then edited again by Lish, under the new title we now know the story. Lish’s version distills the story to the bare essentials, including the dialogue.  It was the better version to work with as part of the collection I envisioned.  The Carver estate had granted permission to do this but after a year of trying to place the work, and not having the right connections, it has languished.

So, given this background, I had to see Birdman as soon as it opened nearby.  Very little of the short story’s dialogue is actually used in the movie, but it anchors the film in many ways.  (It was nice to see the set though, a 1970’s kitchen, exactly the way I envisioned it.) The Carver short story is about love in all its manifestations, from spiritual love to obsessive, violent love, but is set in its time, alcoholism as the primary social lubricant, and in literary realism. Birdman is about love as well, updated for the 21st century, which now includes self-obsessive love strongly influenced by the power and effect of social media along with “magical surrealism” dominating the canvas of the story. 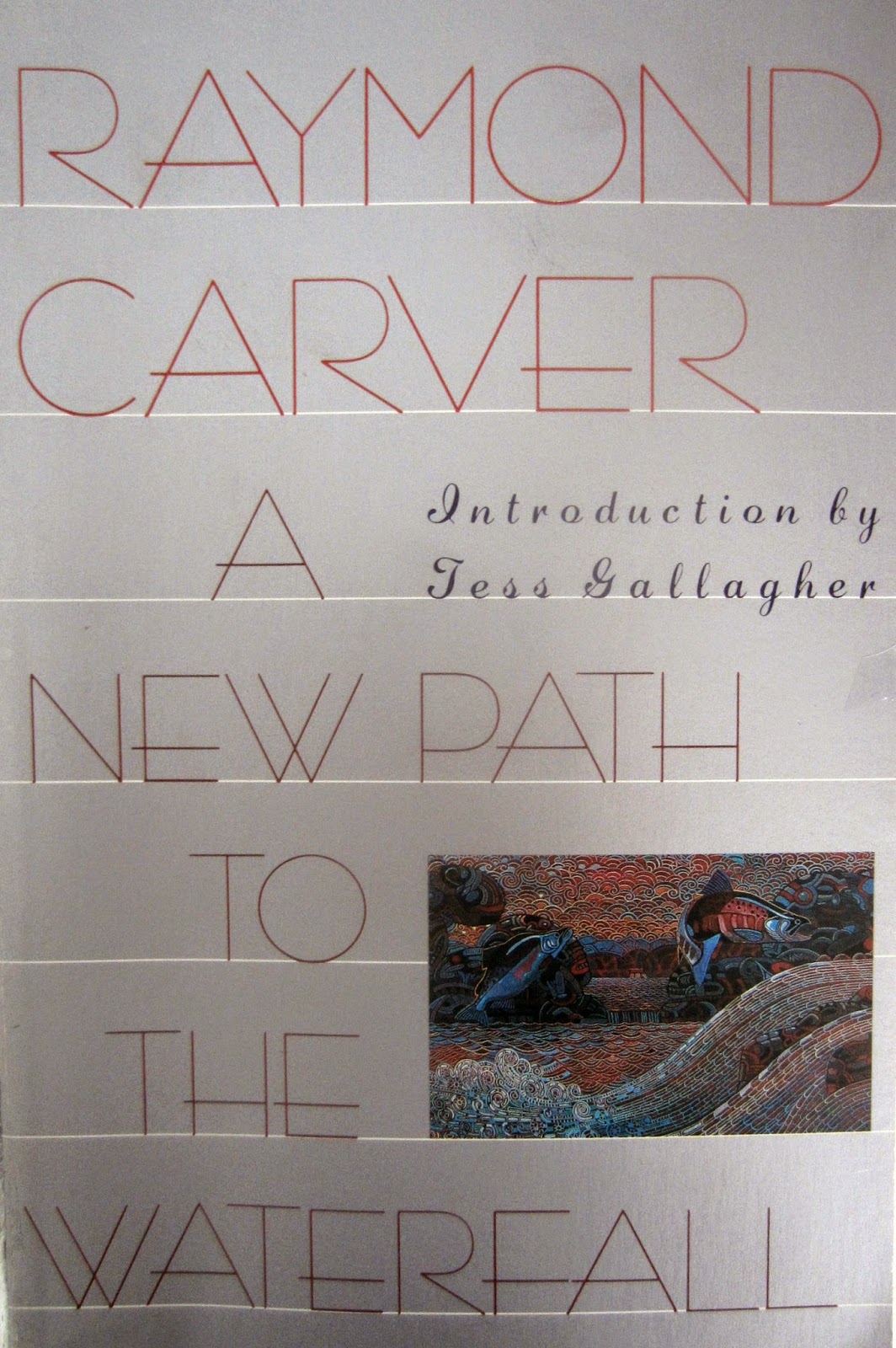 Fascinating for me, the film opens with a quote from Carver, one of the last poems he ever wrote as he was dying of cancer -- his epitaph -- “Late Fragment,” published in a collection A New Path to the Waterfall with an introduction by his wife, also a poet, Tess Gallagher.  .  One thinks of Carver only as a short story writer, but he wrote poetry as well.  As Gallagher put it “…Ray’s new poems blurred the boundaries between poem and story, just as his stories had often taken strength from dramatic and poetic strategies.”


And did you get what


you wanted from this life, even so?


And what did you want?


To call myself beloved, to feel myself


beloved on the earth.

And that is the theme of this movie – wanting to be beloved on earth.  All the characters are struggling in their own way to find approbation and love. Aren't we all?

The plot in a nutshell involves a has-been superhero (The Birdman) film actor, Riggan Thomson (played brilliantly by Michael Keaton), who seeks “legitimacy” on the Broadway stage by adapting Carver’s short story, and then producing, directing and starring in it.  He is haunted by his alter ego, Birdman (this is where the surrealistic element emerges), who declares him as still having superpowers (he is seen levitating in a yoga pose in the first frame).  His struggle with his past self and what he envisions as his future artistic self is what propels this frenetic film from its beginning to its end.  Also in the cast is his sympathetic former wife, Sylvia (Amy Ryan), their daughter, Sam (Emma Stone) a  recovering addict, and the co-stars in the play, one of which he was recently involved with, Laura (Andrea Riseborough) and Lesley (Naomi Watts) a girlfriend of a well-known Broadway method actor, Mike Shiner (Edward Norton). Riggan’s only friend and business manager, Jake (Zach Galifianakis) persuades Riggan to hire Mike at the last minute for the other male character part in the play.  Mike and Riggan come to blows and yet the show goes on. All the ingredients are here for love relationships in all their variations, good and bad, not unlike the heart of the Carver story.  I’m trying to avoid spoilers here.

I mentioned that the Carver quote is the central theme of the movie.  There is one exchange between Riggan and his daughter Sam where this resounds loudly.  I remember tapping my wife Ann on the shoulder as Sam was in the middle of delivering her monologue. After that climatic moment, Riggan is on track to shred his “unexpected virtue of ignorance”:

Riggan:  "This is my chance to finally do some work that actually means something."

Sam: "That means something to who? You had a career, Dad, before the third comic book movie, before people started to forget who was inside that bird costume. You are doing a play based on a book that was written 60 years ago for a thousand rich old white people whose only real concern is going to be where they have their cake and coffee when it's over. Nobody gives a shit but you! And let's face it, Dad; you are not doing this for the sake of art. You are doing this because you want to feel relevant again. Well guess what? There is an entire world out there where people fight to be relevant every single day and you act like it doesn't exist. This is happening in a place that you ignore, a place that, by the way, has already forgotten about you. I mean, who the fuck are you? You hate bloggers. You mock Twitter. You don't even have a Facebook page. You're the one who doesn't exist. You're doing this because you're scared to death, like the rest of us, that you don't matter and, you know what, you're right. You don't! It's not important, okay? You're not important! Get used to it."

Where did Riggan get the idea of adapting a Carver short story?  It’s revealed that when he was a young actor, Carver was in the audience and wrote a note to him on a cocktail napkin to say that he admired the performance.  Decades later he still carries the napkin, presents it as his trump card to the New York Times critic who says she’s going to pan the play as she doesn’t admire movie actors who try to cross the line into legitimate theatre.

And so still another theme unfolds in the film.  Movie actors are celebrities, have fame but do they have the right stuff?  How does live theatre stack up against film? There is no contest as each art form functions on a different plane.  Carver’s short story could make great theatre, but Birdman needs to soar on film, and what a film it is.  Ironically, as Riggan is the writer, producer, and director of the Carver play in the film, Birdman was co-written, produced, and directed by one person as well, Alejandro González Iñárritu.  The only thing he did not do as the main character in the film, was to become a character.

The movie has the feeling of being filmed as one long continuous take.  It is two hours of breathtaking cinematography perfectly accompanied by music selections, mostly the pulsating drums of Antonio Sánchez who even makes a brief passing appearance in the film.  One can imagine those beating in Riggan’s head.   Nothing is out of bounds for this film and only film could capture the gestalt, the play within the film, the character’s intense relationships, Riggan’s journey, and the alternative universe of the Birdman which, no pun intended, gives this film breathtaking wings. It is also a love poem to the New York City theatre district, something that reverberates with me.

This film is revolutionary and expect to hear it nominated for a host of Academy Awards, best picture, screenplay, directing, not to mention best actor as Michael Keaton gives a once-in-a-lifetime performance, best supporting actor (Edward Norton was outstanding as a foil to Riggan), best supporting actress, Emma Stone (who can forget her mesmerizing eyes as well), best cinematography, best original soundtrack, and I could go on and on.

Come to think of it, except for the protagonist, I’m the only person (to my knowledge) that has completed a dramatization of Carver’s story.  And it’s good.  Maybe it will take” wings” yet. Nonetheless, this is not a movie to be missed.  And if Carver’s What We Talk About When We Talk About Love is never produced as a play, read the story, and then think about the movie. 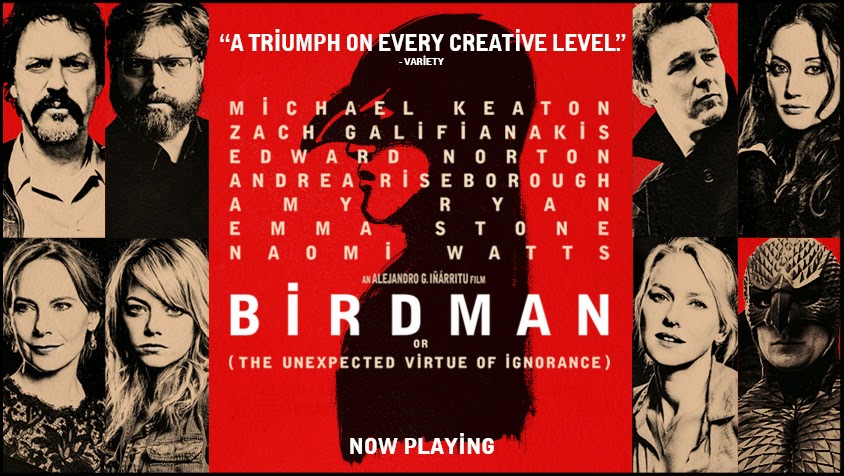