Totalitarianism feeds on propaganda and the control of information.  My former college psychology professor, Gustave Gilbert, the author of The Nuremberg Diary said that Joseph Goebbels, who had been an unsuccessful writer, “devoted his considerable talents for propaganda to the task of winning over Berlin’s leftists to the cause of Hilterian fascism.” (The Psychology of Dictatorship, 1950).  Ultimately Goebbels served as Reich Minister of Propaganda of Nazi Germany from 1933 to 1945.  Per Wikipedia, “Goebbels' Propaganda Ministry quickly gained and exerted controlling supervision over the news media, arts, and information in Germany. He was particularly adept at using the relatively new media of radio and film for propaganda purposes.”

Imagine if he had the Internet at his disposal.

Now we have Moscow born, former Trump special assistant, and presently Sinclair Broadcasting’s senior political analyst, Boris Epshteyn, vying for the position of the “Ministry of Truth & Public Enlightenment.”   Sinclair Broadcasting has been quietly buying up local television stations, mostly in Trump country, to spread its conservative propaganda. By now everyone knows of the coordinated “Newspeak” perpetrated by Sinclair’s stations where local “news” anchors were required to read the same statement: The sharing of biased and false news has become all too common in the media. More alarming is that national media outlets are publishing these same fake stories without checking the facts first. Unfortunately, some members of the national media are using their platforms to push their own personal bias and agenda to control 'exactly what people think'. 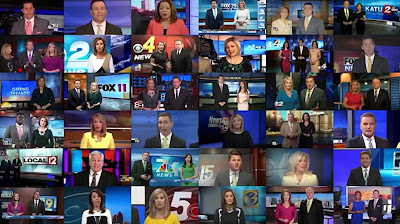 Word for word, all Sinclair stations with local news broadcasters many of whom we have followed through their years, thinking of them as, well, just regular people like ourselves.  Old friends.

One such station happens to be in our viewing area, a CBS affiliate.  They too parroted this statement, as if they were speaking to us, although it was really Boris Epshteyn.  These are friendly faces we’ve seen on air before our morning commutes or once we get home. A Palm Beach Post staff writer, Frank Cerabino, wrote a funny but profound parody of what these local news anchors “really said.”

A list of all the Sinclair stations, by State, shows the concentration in “flyover” States, with most major cities not represented.  Think of their territory as mirroring the Electoral College.

Ironically, on the surface, the statement IS essentially true, and that is where the danger lies, voiced by an organization which indeed has “an agenda.” The unsuspecting public is but a little Red Riding Hood being toyed with by a big bad Wolf, one who knows exactly what it’s doing.  After all, this is the organization which has pushed the “deep state” conspiracy theory.

One of the favorite techniques in propaganda is to say it over and over again.  Fox News has been doing it for years.  Now your local news broadcaster may be coming for your mind.  "Oh Granny, what big teeth you've got!"
Posted by Bob at 11:59 AM