The Misery of Hurricane Dorian

A couple of weeks ago I saw a tropical wave on the NHC web site way out in the Atlantic which they were forecasting to become a tropical storm, not even a hurricane, and remain that way as it continued its westward movement.  I remembered the complacency over Hurricane Andrew in the early 1990s, although we did not live in Florida at the time.  Given where we now live, I watch these things carefully in the summer.

Bottom line, the NHC failed miserably to get the intensity right even though common sense, the lessening of wind shear, and high ocean temperatures would seem to encourage more severe tropical development.  Such was the case with Hurricane Andrew. Perhaps their track forecast was overly dependent on one which would take the storm over the mountain ranges of Haiti, thus presumptively ripping it apart, to ring the alarm bells of a storm of Andrew’s caliber.  Perhaps the steering currents made their mistaken track estimates more understandable, but the intensity is another matter.

I didn’t buy into their forecast and at least a week before I filled my gas storage containers for my generator and filled the cars and also stocked up on water.  There was no guarantee that the Haitian mountains would disrupt this storm and to me highly probable that the ocean’s temperatures would feed the beast.  To me, it could be another last minute Hurricane Andrew in the making. As it happened it missed both Haiti, and, thankfully, Puerto Rico.

We watched in horror though as it approached the Bahamas.  We’ve been to many of the islands in the Abacos and have spent some time in Marsh Harbor in particular, getting to know the place and the wonderful Bahamian people.  It is unthinkable seeing the complete destruction of such a beautiful island and the misery Dorian was bringing to its people.

Our thoughts also turned to our own situation. We felt safe in our home which has been fortified by a new roof tested for a Cat. 5 hurricane.  We also retrofitted key windows and doors with hurricane impact windows and installed a hard-wired partial house generator to keep essentials going.  Hurricane impact roll down shutters now protect the porch and the garage door is similarly rated.  Therefore, we had every intention of just hunkering down and waiting for this to pass.

While waiting I received a call from my high school teacher and grade advisor when I was 17 (we’re talking 60 years ago), Roger Brickner.  He knows where we live and wanted to make sure we’re ok and prepared for the storm.  I’ve been in touch with him on and off over the years.  Ten minutes later, Martin Tucker, my college teacher when I was 19 and friend for life called for the same reason.  They are both octogenarians – or older --and they still keep in touch with their favorite student!  I thought it a remarkable coincidence, reaching across all those years.

However, by last Sunday morning, our greatest fear for the Bahamas becoming realized, I was up for the NHC 5:00AM advisory which moved the cone south and west and that was enough for us.  Not taking chances with a Cat. 4 or 5 hurricane.  If it misses us like Matthew as they “thought,” we’d be delighted but when I saw that update which moved it uncomfortably closer to us, I immediately got on line and managed to book a room for that night and next (and more if needed) at the Ft Lauderdale Marriott Coral Springs Hotel which has all the facilities we’d need (food and generator) and therefore decided to stay there until it passed.  Even that area was now on the edge of the cone.  If we were twenty years younger, we would have stayed in our home, but the anxiety was just not worth it.

So we hurriedly packed up, threw a case of water and some non-perishables in the trunk of our car and got on the Florida Turnpike for the hour drive SW and we assumed (correctly) out of harm’s way.  The hotel personal could not have been nicer to the “evacuees.”  At times it seemed a little like Noah’s Ark as some people arrived with dogs and even birds in cages.  And to add to the otherworldliness of the experience, the Argentine Women’s Ice Hockey team was staying at the hotel.  Yes, ICE hockey, training at a nearby facility (imagine, ice hockey in FL)!  We knew we were in the right place!

I’ve tried to inject some humor in this picture, but the situation in the Bahamas is dire, and the Carolinas is about to get hit.  Florida has taken a very proactive relief effort for the Bahamas, planes and ships loading up on supplies.  Our own contributions are being directed to http://ewfrelief.org as they can immediately get goods and tools to those in need there.

In retrospect we could have stayed.  No damage or even loss of power where we live. But we had some piece of mind. I’ve written about many of the hurricanes we’ve been through and like the others, this is yet another I wish became a fish in the Atlantic.  The picture below also adds to the bizarre nature of it all, a spectacular sunset at our home only a day after the storm exited.  Is this the same planet, one that can sequentially dish out such destruction and placid beauty? 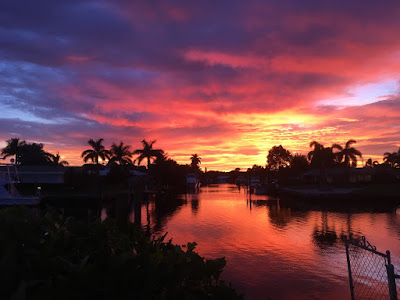 Disaster Planning and the Oklahoma Tornado


Disaster Planning is something we seem to do very poorly.  It took a wake-up call such as Hurricane Andrew to upgrade building codes in Florida, an attempt to build better wind resistant structures to ameliorate loss of property and protect lives in the future.  Florida still has a long way to go, particularly with insurance issues.

But an improved building code would have done little to minimize structural damage in an F4 or F5 tornado that stays on the ground for a long time such as the horror of yesterday's Oklahoma tragedy.  On the other hand, requiring that new homes be built with a below ground storm shelter, and new schools have storm proof basements, with adequate ventilation and supplies in the event of a structural collapse, is something that could be done.  Retrofitting homes with even a minimal below ground shelter would not be that costly.  Give homeowners offsetting tax credits.  It would save lives.  The odds for surviving a direct hit from such a monster tornado are high in any below the ground shelter as most deaths are from structural collapse and flying debris.

In the meantime, nothing can be done other than to try to help the victims. There are a number of charities, but the Red Cross has their team there now and one of the best ways to help victims is to give to their disaster relief fund. It is our charity of choice in spite of the occasional false Internet rumor that the Red Cross keeps too much of its charitable donations for its own operating expenses.  It is a large organization and as such perhaps it is a little less efficient than smaller disaster relief charities, but they are in the vanguard of the first responders in Oklahoma.

Here is a complete text of their news release on this horrific tragedy which includes information about making small contributions via texting.

The American Red Cross issued the following statement following the tornado in Oklahoma this afternoon:

WASHINGTON, Monday, May 20, 2013 – Our thoughts and concerns go to everyone in Oklahoma following this horrific tornado.

The American Red Cross has one shelter open in Moore and is working on locating others; we continue to operate three shelters that were opened Sunday in the Oklahoma City area following the storms on Sunday. .

Red Cross volunteers are out tonight with food and supplies supporting first responders.

More than 25 emergency response vehicles are positioned to move at first light Tuesday, and we expect that the number will increase. The Red Cross is also sending in kitchen support trailers to support the upcoming operation to provide meals to those forced out of their homes.

People in Oklahoma near the tornado area are encouraged to connect with one another and let loved ones know that they are safe. This can be done through the I’m Safe feature of the free Red Cross tornado app. In addition, if you have access to a computer, go to redcross.org/safeandwell to list yourself as safe. If not, you can text loved ones or call a family member and ask them to register you on the site.

This has been a major disaster, and the Red Cross will be there for the people in this state and this community. People who wish to make a donation can support American Red Cross Disaster Relief, which helps provide food, shelter and emotional support to those affected by disasters like the recent tornadoes in Oklahoma and Texas as well as disasters big and small throughout the United States by visiting redcross.org, dialing 1-800-REDCROSS or texting REDCROSS to 90999 to make a $10 donation.
Posted by Bob at 7:58 AM