The Maltz Production of ‘Brighton Beach Memoirs’ is a Classic 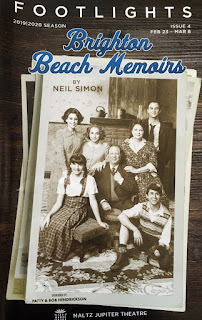 Neil Simon might be the most underappreciated “serious” playwright for today’s audiences.  Sure, my generation knows and loved his plays, many of which have migrated to TV or film.

Perhaps because they were so entertaining that he is not often thought of in the same pantheon of our “serious” playwrights such as Arthur Miller, but by sticking with his characters and extensively drawing on his own life, he created meaningful drama, capturing the way people think and talk and experienced angst and love during the 1960s to 1990s.  I think of the Brooklyn of Brighton Beach Memoirs in the 1930s and consider it as dramatically meaningful a place as Grover’s Corners in Our Town at the turn of the century.  Both examine a slice of life so real that by the end of the play, we know these people and the times in which they lived.  The themes are universal, but in the case of Simon’s work, he was able to magically weave laugh out loud humor into his serious dramas.

Time has come, now a couple years after his death at 91, to reevaluate Neil Simon’s works and polish them off with today’s theatrical sensibility, and this is exactly what the Maltz Theatre has done with Brighton Beach Memoirs, the first of his “Eugene Trilogy” his most autobiographical work, which was later followed by Biloxi Blues and Broadway Bound.

What makes a great playwright?  Simon, in an interview with NPR in 1996, said ‘when I was a young boy - 5 and 6 and 7 years old - my parents would take me to visit their relatives. And for some reason, I think they thought that I was invisible because they never talked to me….I could hear, but they were talking family matters - or gossip or whatever. And I just sat there. And once in a while, they'd give me a cookie or something. And I just listened. It stuck in my head. And what I managed to learn was the way they talked, the choice of words they made, what it was that they were interested in. And years later, without knowing it, when I started to write about these people, I was able to draw on my own memory from what happened in those days.”

That in essence is the foundation of this great play, set in the pre WW II Brighton Beach section of Brooklyn.  Because family dynamics are so universal, we see our own family life and foibles.  It is a coming of age play for Eugene, with all of the other characters experiencing some harsh lessons too.  Most poignantly portrayed, is America itself, painfully digging out of a depression, only to be facing the bleak beginning of WW II.

The Maltz production is directed with loving attention by award-winning South Florida director J. Barry Lewis.  He has mined every drop of significance out of Simon’s intentions and infused this play with laughs all along the way.  He is helped enormously by casting one of the most talented assembly of actors we’ve seen in a long time.

Anthony Zambito gives an award winning portrait of 15 year old Eugene Jerome, vacillating between his fantasies of pitching for the New York Yankees, somehow knowing his destiny as a writer, but meanwhile frequently being sent to the store by his mother for the smallest of items.  “Eugene!” is a constant refrain.  Zambito’s enthusiasm on stage is infectious, frequently breaking the fourth wall, but with a naturalness that makes you know this person and feel he is talking to you as a friend but from another era.  Naturally many in the audience actually remember those times or at least our parents talking about them.  Eugene’s struggle with the joys, vicissitudes and the wonders of puberty are amusingly portrayed by Zambito.

Laura Turnbull is Eugene’s mother, Kate, the quintessential harried Jewish housewife.  She freely expresses her views, and prejudices, but it is all in the service of protecting the family she fiercely loves.  Turnbull’s performance is tender and heartfelt, but beneath the veneer, there is a steely anger that eventually erupts.  Her stellar performance is true to life every moment she is on stage. We sympathize with her trying to keep the household together on a shoe string budget, especially after taking in her widowed sister and her two children.  She is the enforcer, especially attempting to keep her two sons on the straight and narrow.  Her major worry is her husband, Jack, who works two jobs to keep his household afloat which also includes Eugene’s older brother, Stanley.

Kate’s sister, Blanche, is majestically performed by Margery Lowe.  She exhibits a touching uncertainty about her future, how she should raise her two teenage daughters, Laurie and Nora.  She is grateful to her sister, but hates having to be a dependent on an already burdened household.  She is inexperienced in dealing with her teenager’s theatre ambitions as well as with her own lonely life.  This role requires a consummate actress and Lowe delivers.

Daughters Nora and Laurie are played with conviction by Krystal Millie Valdes and Alexa Lasanta.  Valdes gives a performance that increases some of the tension in the play, by wanting to break away from the family to pursue a “Broadway career” and at the same time unconsciously feeding the fantasies of puberty crazed Eugene.

Alex Walton as Stanley, Eugene’s older brother, delivers a strong performance as the son who, right after high school has gone into a soulless job to bring in that extra paycheck.  He wants his father’s approval, but is still growing up and making youthful mistakes.  He also acts as a surrogate father aiding in Eugene’s sexual education, with many laughs populating the truths which shock Eugene.

Avi Hoffman plays Jack Jerome, the heavily troubled father, clearly the patriarch of the family, but one with a sense of justice.  When big family decisions are necessary, the family turns to him.  Excepting his fate, he says "when you inherit a family, you inherit their problems." Hoffman is another extraordinary actor, with a long history of experience in the theatre.  It shows.  His portrayal is so natural and yet commanding.

Scenic design is an integral part of making this production such a success.  Scenic designer Anne Mundell creates a three tiered stage, the lowest level representing the outside where some of the scenes take place, the next level the dining and living area, where most of the action transpires, particularly the comic dining room scenes (the liver and mashed potatoes scene is a riot, and rings with truth), and the upper level, where we see two bedrooms, one for the boys, Eugene and Stanley, and another for their cousins, Nora and Laurie.

Costume designer Tracy Dorman has created splendid period costumes, perfectly conjuring up the house dresses worn before the war and a few very colorful ones that brightened up the set.  Blanche’s dress, prior to a date, is a stand out.  Lighting design is by Kirk Bookman and the award-winning resident sound designer is Marty Met.

The Maltz production of Brighton Beach Memoires does justice to Neil Simon as one of the most important playwrights of 20th century America.

All photos, except for the program, by Zak Bennett