Sense of Impotency in the Age of Trump

Gaslighting will do that to you.  The endless stream of invectives and distortions coming from our own President and his administration, ignored by many of our elected representatives, leaves one feeling a sense of helplessness, hopelessness, and even sickness.   The easy way out is to get dragged into the melee, and engage with extremists from both ends of the political spectrum, taking our tribal positions.  I’ve done it and still do, but there may be another way.  Join RDI, the Renew Democracy Initiative.  Here is a place for non extremists from both sides of the political divide to find solace and work together to preserve our Democracy, like-minded folk who believe in their Manifesto, particularly #13:  There is still a center in Western politics, and it needs to be revitalized— intellectually, culturally, and politically. The center right and center left are still joined by a broad set of common values, including respect for free speech and dissent, a belief in the benefits of international trade and immigration, respect for law and procedural legitimacy, a suspicion of cults of personality, and an understanding that free societies require protection from authoritarians promising easy fixes to complex problems. 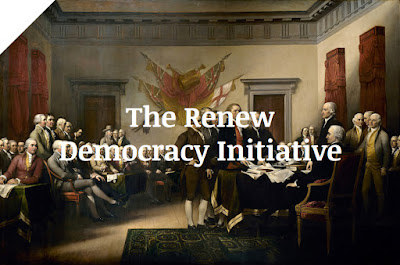 Think about it.  We live in an age where a porn star is suing a sitting President for defamation of character.  Not that I don’t think she has a right, particularly as we elected a man who boasted about grabbing women by their “pussy.”  A reality TV star has turned politics into a reality TV show. We elected him.  The Office of the Presidency is demeaned every day and in so doing the moral compass of America’s leadership disintegrates in a haze of gaslighting, jeopardizing the democratic principles we have built for more than 200 years.  We’ve made such progress, and shame on us all to let it be undermined with catchy simplistic slogans like “Make America Great Again,” or the endless stream of consciousness impulse tweets, mass-market entertainment passing as Presidential proclamations.

From RDI’s site: The world is in the midst of a modern political crisis fueled by fear, distrust, and confusion. Disturbing global trends, such as populism and authoritarianism, are imperiling the basic tenets of liberal democracy.  The Renew Democracy Initiative (“RDI”) came into existence as an effort to reinvigorate democracy and combat the extremism that deforms public debate.  Our goal is to remind, to educate, to advocate for liberty.