It is a moment one almost likens to tales of the unbelievable, news about one's 50th high school reunion. When I graduated from Richmond Hill High School in 1960, it would have been the class of 1910’s turn; it would never happen to us. Now in 2010, it is our turn, my generation no longer on deck, but in the batter’s box, approaching a full count. Baseball metaphors were in my thoughts as I held the invitation to my 50th HS reunion from one of my old classmates.

I had attended the 20th reunion and generally was not recognized or probably more aptly, not remembered. The surreal aspect of that gathering was it took place at the school itself, its hallways, classrooms, and the cafeteria where the reunion was celebrated, all seeming to be diminutive, as if we had either grown into giants or the rooms had shrunk. Recognizable was the old route to the high school, partially along Jamaica Avenue which connected my two childhood homes.

Richmond Hill was a working class community of mostly families of German, Italian and Irish heritage. A recent Wall Street Journal article described the evolutionary changes to what used to be called 'Berlin' in the 1800s. Although still a working class community of immigrants, it is now primarily populated by families from India and Guyana. So the baton of opportunity in the New World has been passed on to a new generation of immigrants.

Gone are the landmarks of my youth, in particular, Jahn’s where we spent our teenage after school time or the next door RKO Keith’s where as kids we were drawn to the Saturday matinees and the Triangle Hofbrau diagonally across the street, the restaurant where our family sometimes celebrated special occasions. My father, mother, uncle and aunts had all attended the same high school. Now they are all gone and most of the people I went to school with have migrated east to Long Island or west to New Jersey. Probably no one remains in the old neighborhood.

Our 8th grade graduation photo (I’m second from the right in the first row) shows us on the cusp of entering that high school, with our future selves lying before us. Now we look back and wonder how that deceptively eternal future suddenly became the past, the world of today not even imaginable then. 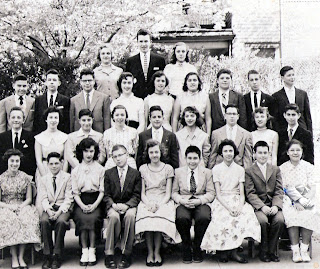 I mean this literally and figuratively, an astronomical low as evidenced by the photo below of the Norwalk River. 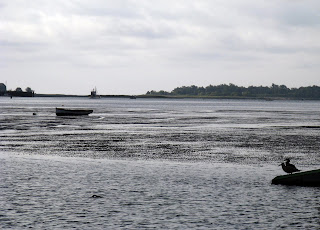 And a walk down Westport’s Main Street, my first in many years, revealing that most of the local shops are gone, the Remarkable Bookstore and Klein’s now a figment of my memory and, in their place, trendy shops one would encounter in an upscale mall. In fact, think of downtown Westport, CT as now being mostly an outdoor mall with only Acorn Pharmacy, Westport Pizzeria, the Liquor Locker, and Oscar's the vestiges of the New England town I once knew. 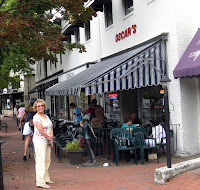 I remember watching Wall Street Week with the late Louis Rukeyser in the late 1970s and early 1980s during another alarming economic period, with talk of South American style inflation reaching the U.S. and the mindset that goes along with that fear, people buying gold, eschewing long term US Treasuries which were yielding around 15%. It seemed each and every week investors were waiting for reports on the “money supply” with any large increase reinforcing the then prevailing view. In retrospect, how much simpler and more benign economic matters seemed then.

Now money supply measurements are not even discussed. Instead, we wait with baited breath for the Fed’s latest interest rate decision, endeavoring to parse the Federal Open Market Committee’s statements, comparing them with prior statements for clues as to what the future holds.

Today seems to be the inverse of those days with US Treasuries yielding nearly nothing, and the fear of deflation driving investor psychology, leaving few alternatives to us average folk not of CNBC’s fast money crowd. By the Fed’s decision to reinvest its portfolio of maturing mortgages in U.S. Treasury debt, rather than shrinking its balance sheet, it has embarked on a method of monetizing debt. Normally this would ring the inflation bells but not in this economic environment where spending is a higher priority than reducing debt or saving. Deflation is a state of mind that once it takes hold becomes a self fulfilling prophecy, particularly in the wake of the economic turmoil and bailouts of the financial sector of the last few years, with high unemployment and state and local government fiscal problems, leaving the Fed with few remaining options. And, unlike inflation, we have little experience with it other than the 1930s and Japan’s ongoing battle with it since the early 1990’s.

As reflected by CD rates of nearly zero, it is an investment environment where one has two choices, take risk (which is being encouraged by the government’s actions) or put your savings under a mattress (which, in a deflationary environment produces a positive return without risk). Inflation or deflation? One has to wonder what the Fed knows that we don’t. It is a conundrum for the saver. Bring back the good old days of Wall Street Week! 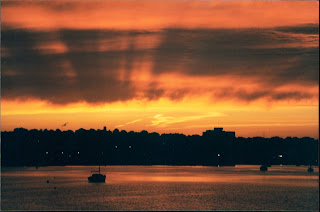 Several years ago Ann cut out an article in the Palm Beach Post about Concord, Ma. and its rich 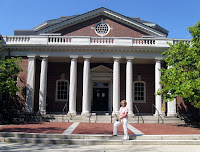 literary and revolutionary war history. As we were visiting our son, Chris, in nearby Worcester, it was an ideal opportunity to push on to Concord for a couple of days, stay at a B&B (North Bridge Inn, highly recommended) and see for ourselves. We decided to concentrate on Concord’s literary history, and its place at the crossroads of Transcendentalism with Emerson as the center of that universe. To walk where Emerson, Thoreau, Alcott, and Hawthorne walked is awe-inspiring. They were all 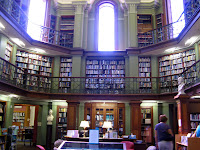 contemporaries, living near each other. This is indeed a sort of holy ground of American literary and intellectual history.

There is no better way to start such a trip than to visit the Concord Public Library, dedicated by Ralph Waldo Emerson when it opened in 1873. In this day of the Kindle and the iPad, it was refreshing to be in a traditional library, befitting the literary community which it is at the center. Inside one can find Daniel Chester French’s sculpture of Ralph Waldo Emerson. French’s tools were given to him by Louisa May Alcott. 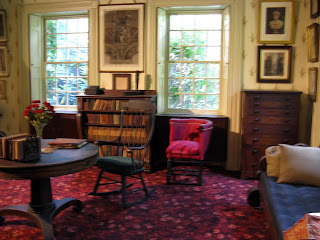 In the Concord Museum Emerson’s study is perfectly preserved, moved there after there was a fire in the Emerson home.

The Old Manse was home at one time or another to both Hawthorne and Emerson. Here Nathaniel Hawthorne and his bride Sophia rented for three years beginning in 1842. While on tour, we were able to see the following etching in one of the window panes using Sophia’s diamond wedding ring:

Man's accidents are God's purposes. Sophia A. Hawthorne 1843
Nath Hawthorne This is his study
The smallest twig leans clear against the sky
Composed by my wife and written with her diamond
Inscribed by my husband at sunset, April 3, 1843. In the Gold light. 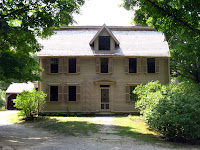 One can still see the smallest twig leaning “clear against the sky.” It would have been interesting to eavesdrop on conversations between Emerson and Hawthorne as Hawthorne was not a Transcendentalist. Henry David Thoreau (pronounced “Thorough” by the natives) is said to have planted the garden at the Old Manse as a wedding gift to the Hawthornes. The garden still blooms there. From the Old Manse Emerson’s grandfather witnessed the “shot heard around the world,” the opening volley of the American Revolution on the Old North Bridge. 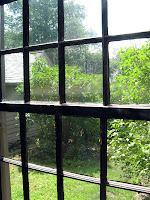 anyone on the tour to try it. Most items on these house tours are of the “look-but-do-not-touch” nature. As no one volunteered I stepped forward to play a few bars of Memories by Andrew Lloyd Webber, my apologies to 19th century sensibilities. It was out of tune, but all keys functioned, more than 150 years after this piano was built.

This is how life was before the “conveniences” of modern life. Parlor games and music, plays written and performed by the residents, writing and philosophical discussions, and books read to the family by candlelight. (Hawthorne read the entire works of Sir Walter Scott to his children while living in Concord.) 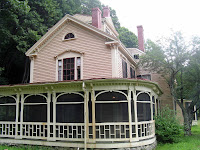 The nearby Wayside is now a National Park property and tours of the home and the nearby North Bridge are conducted by Park Rangers. We were lucky enough to have had a private tour of this home. Louisa May Alcott spent her childhood there and many of the scenes from Little Women were set in her memory from that home. It is also the only home ever actually owned by Nathaniel Hawthorne who gave it the name, Wayside.

The tour of the Orchard House, where Louisa May Alcott actually wrote Little Women was inspired. The docent enacted several quotes from the novel, leaving one motivated not only t

o buy the book (once again) but others as well in the gift shop.

Alcott’s father, an educator who struggled to make ends meet, was an enlightened man, encouraging his daughters to learn, building a small desk for Louisa May (unheard of at the time), and having the pleasure of watching his daughter become one of the best selling author’s of her time, certainly making the family wealthy. That small, plain desk has been perfectly preserved. Father Alcott was devoted to Louisa May and she was devoted to him. Eerily, as the New York Times reported at the time in 1888, it is a noteworthy fact in connection with her life and death that Miss Alcott and her father were born on the same day of the month, and that they died within 24 hours of one another.

A couple years ago we had the pleasure of touring Emily Dickinson’s home in Amherst. She is probably my favorite poet. I wonder whether her relative isolation in Amherst, while the literary hotbed of New England was not far away in Concord, but far enough to remove her from that scene, might have contributed to the quiet loneliness of her poetry. I am not aware of Dickinson ever meeting the Concord group. 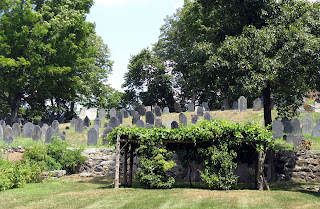 Sleepy Hollow Cemetery is now the resting place of the Alcotts, Thoreau, Hawthorne and Emerson, Thoreau’s grave just simply inscribed, “Henry.” I cannot visit such a graveyard without thinking of Emily Dickinson’s poem I Died For Beauty which I never forgot since reading it in college and in fact recited those words at Dickinson’s gravesite in Amherst:

I died for beauty but was scarce
Adjusted in the tomb,
When one who died for truth was lain
In an adjoining room.

He questioned softly why I failed?
"For beauty," I replied.
"And I for truth, the two are one;
We brethren are," he said.

And so, as kinsmen met a night,
We talked between the rooms,
Until the moss had reached our lips,
And covered up our name

Our wonderful tour of Concord was concluded by having dinner at the Walden Grill with my best friend from college, Bruce, and his wife, Bonnie, residents of nearby Sudbury, and both dedicated teachers of literature. Perhaps learning, teaching and literature are in the water of Concord, Ma. and its environs!
Posted by Bob at 12:46 PM