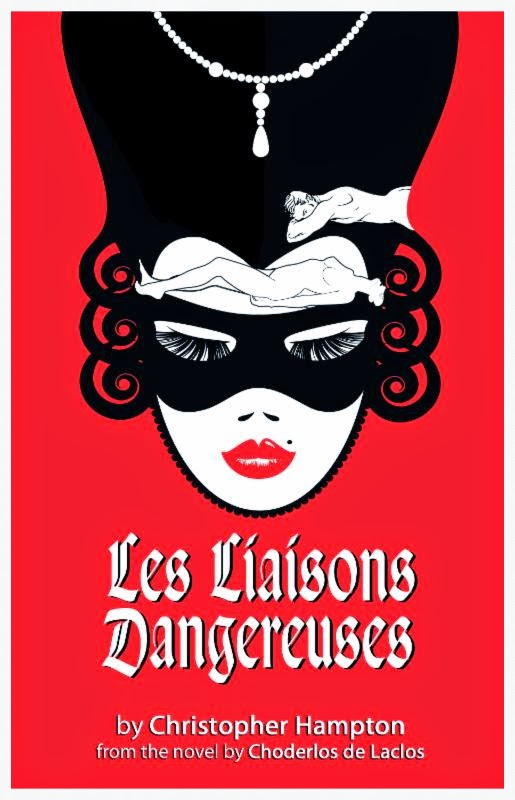 I remember seeing some of Molière’s light and relatively harmless farces.   Perhaps I was expecting something along those lines, but Molière wrote a century earlier.  He never would have thought of writing the scandalous subject matter taken on by Choderlos de Laclos who wrote the epistolary novel Les Liaisons Dangereuses on which Christopher Hampton’s play is based.  It is quite a study in changing mores foreshadowing the downfall of a depraved class. I come to this play with a particular advantage (or perhaps disadvantage) -- I’ve never seen the movie (or the play)!

The play depicts games of humiliation and deceit, waged by arrogant aristocrats who preen with a sense of invulnerability, using treachery, sexual perversion, and degradation as their weapons.  Are these merely the games of the leisure class, a decadent society that is about to be destroyed in pre revolutionary France or is it a more universal theme?  The fact that Choderlos de Laclos’ novel has endured since 1782, and serves as the basis for a contemporary play, which was then reincarnated into a movie, seems to answer the latter question.  Think of today’s popular culture, the heartless “reality shows,” the treachery played out every day in corporatocracy and government, and the Internet affording abundant opportunities for narcissism and voyeurism, as just some of the manifestations.   Human nature is, well, human nature.

Two former lovers, aristocrats suffering from a severe case of ennui, Le Vicomte de Valmont (Jim Ballard) and La Marquise de Merteuil (Kate Hampton), for their own complicitous amusement set out to destroy some lives in their social circle.  Merteuil wants Valmont to seduce a young girl straight out of a convent, Cécile Volanges (Kelly Gibson) to settle a score.  “Too easy” responds Valmont who has his eyes on another more challenging target, the highly principled (and married) La Présidente de Tourvel (Katie Fabel).  Merteuil finally promises Valmont that if he can produce “written proof” of seducing Tourvel, she would have sex with him.  Meanwhile Cécile and her music teacher, Le Chevalier Danceny (Brian William Sheppard) have fallen in love.  And Valmont has learned that Cécile’s mother, Madame de Volanges (Maribeth Graham), has written to Tourvel calling him a “pervert.”  He now seeks revenge by bedding Cécile, Merteuil’s original intended target.  So the stage is set.  Merteuil and Valmont devise a scheme to trick Danceny and Cécile into their confidence.  From there the rest of the plot unfolds almost from its own internal energy, imbued with intrigue, deceit and sexual maneuverings.  And the actions of our villains have consequences in the end, circling back to them. The guillotine awaits them all!

Central to the play is the sexual, competitive tension between Ballard and Hampton pulling the strings of the other players, frequently with soap-operatic overtones.  Ballard plays his part with an arrogantly superior and disdainful demeanor but with a hint of humanity and, ultimately, vulnerability, while Hampton is the more malevolent predator.  In fact, Hampton’s Merteuil strikes me as a sociopath, whose verbal interactions can out maneuver any of the play’s characters, including Valmont who excels in persuasive rhetoric when it comes to bedding a woman.  Hampton comports herself with an untouchable imperiousness, and her power over the other characters is absolute.   She also gives voice to feminist rage -- after all, this was a society that was male dominated, and Merteuil seeks revenge on that score as well. One tell-tale exchange between she and Valmont seems to sum up her entire being, after Valmont asks I often wonder how you managed to invent yourself.  Merteuil replies I had no choice, did I, I’m a woman.  Women are obliged to be far more skilful than men, because who ever wastes time cultivating inessential skills?  You think you put as much ingenuity into winning us as we put into losing: well, it’s debatable, I suppose, but from then on, you hold the ace in the pack.  You can ruin us whenever the fancy takes you:  all we can achieve by denouncing you is to enhance your prestige.  We can’t even get rid of you when we want to: we’re compelled to unstitch, painstakingly, what you would just cut through.  We either have to devise some way of making you want to leave us, so you’ll feel guilty to harm us; or find a reliable means of blackmail:  otherwise you can destroy our reputation and our life with a few well-chosen words.  So of course I had to invent:  not only myself, but was of escape no one else has ever thought of, not even I, because I had to be fast enough on my feet to know how to improvise.  And I’ve succeeded, because I always knew I was born to dominate your sex and avenge my own.

The Dramaworks production is ambitious, twelve actors in a relatively small space with multiple scene changes, but the theatre company is up to the challenge.   The Director (Lynnette Barkley), the costume designer (Brian O'Keefe), the scenic designer (Victor Becker), the lighting designer (Jerold R. Forsyth) and the sound designer (Steve Shapiro) bring this period piece to life.  Barkley has a specific vision and coming from an extensive background of musical theatre and choreography, this production benefits from that skill.  (I loved the opening sequence of all the actors briefly posing “tableaux vivants” before the action begins, like a big production number of a musical.) There are eighteen scenes (too many, but that is what the play calls for) and Barkley tries to minimize interruptions of the action -- no blackouts and minimal moving of furniture -- so the many scene changes are as fluid as feasible, enhanced by Becker’s clever scenic design, and Forsyth’s lighting, moving from “sensual” to “cold and angry” and Shapiro’s selection of musical interludes for those changes – “to keep the energy going.”

The details of costumes and scenery are extraordinary.  Ninety percent of the 18th century furniture on the stage is original, not replicas.  The elaborate gold leaf railings and balusters were all welded in the Dramaworks shop.  There are 26 costumes for 12 actors and as the play takes place over three months, the changes are designed to connote the passage of time. Brian O'Keefe's costumes are spectacular!  (And kudos to the wig designer, Omayra Diaz Rodriguez.) Finally, there is a revolving staircase to assist with the multiple scenic changes.  It is a formidable undertaking for a regional theatre.

But essentially Les Liaisons Dangereuses is a cerebral play – and a long one too, clocking in at almost three hours including intermission --  and although hearts are broken on stage, and there are several redeeming comic elements such as the scene where Valmont dictates a letter intended for his love, Tourvel, while he is having sex with his courtesan, Emilie (well played by Nanique Gheridian, a founding member of Dramaworks) with double entendres abounding, it is a play which may fail to capture the audience’s heart.  (Do we really care about these characters?) My lovely wife, Ann, is away right now, and I usually judge the poignancy of a play by the number of tissues she goes through.  By that anecdotal metric, this probably would be a zero tissue play.  Nonetheless, Les Liaisons Dangereuses is well worth seeing for the costume pageantry and the script’s barbed wit alone.