Last night we attended a performance in our subscription series to the Florida Sunshine Pops Orchestra, always a delightful time with a fine orchestra backing up, usually, Broadway-tested singers. These performances, including last night's, are normally under the direction of the orchestra's maestro, Richard Hayman, who is now in his nineties and enjoying his well earned reputation as one of the legendary arrangers of songs from the Great American Songbook.

A talented husband and wife team, Bev and Kirby Ward, joined the orchestra to perform a Dancin' and Romancin' program, a fitting one for Valentine's Day, organized around the music of the Fred Astaire and Ginger Rogers era. Ironically, the Wards, unknown to us at the time, were our neighbors when we lived in Weston, CT (they in adjoining Wilton). The story of how they met and became a team is fascinating. They put on quite a show, lots of Gershwin, singing and dancing with a great orchestra behind them, and it was a thoroughly enjoyable and professional performance.

The evening also belonged to the guest artist, Copeland Davis. When we first saw him a couple of years ago, I said "Remember that name, Copeland Davis....I will go out on a limb and predict that Copeland Davis is destined to go way beyond the Florida market." Apparently, since then he's appeared on the Tonight Show as well as Good Morning, America. It's nice to see such a prediction come true.

It seems like Davis raised his level of playing even further, if that is at all possible. With his first piece, Fly Me To the Moon, accompanied by the orchestra, he seemed to devour the piano, attacking it, producing his unique fusion style of classical and jazz. Then he followed with a solo piece, My Funny Valentine (what else on Valentine's Day?), a memorable rendition, the melody so clear within his jazz phrasing. His last piece of the night was Satin Doll. I like the way he begins to play the piano in the process of sitting down, as if he is saying "let me at it." Satin Doll is in my own repertoire, and I play it often as an exercise in dropping the fifth when playing chords in the bass. The difference between my rendition and Copeland Davis' is like comparing a Model T to a Lamborghini.

He is a marvel to hear and to watch. As Richard Hayman joked, but in humor there is much truth, he is able to play at such a level even though his fingers are still attached to his hands. As Davis played his solo, Hayman just stood at the podium shaking his head, saying, at the end, "you never know how Copeland will play a piece until he just does it." He is that kind of musician, unique in every way and with an impressive, upbeat stage presence. Catch one of his performances if you are in South Florida. 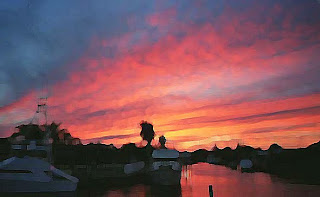 Earlier in the year I was inspired to write about the Florida Sunshine Pops orchestra. And, I’ve written before about jazz performers who are in a class by themselves, both those who are well known and those who work mostly in local venues, performing mainly for the love of the Great American Songbook.

The other night we attended the first of the Florida Sunshine Pops concerts for the season, which was a tribute to Richard Hayman and the Boston Pops. Hayman was the principal arranger for the Boston Pops for some 30 years, and today at the age of 89 is still active as the conductor of the Florida Sunshine Pops. Also, as one of the original members of the Harmonica Rascals he can still play a mean harmonica! His arrangements of Metro-Goldwyn-Mayer film scores are legendary.

This first concert of the season had a special guest performer, someone we’ve seen before, Copeland Davis, whose prodigious talents as a pianist inspired a standing ovation at the end of his first piece with the orchestra, Didn’t We? He brings a rare mix of gifts to the keyboard – first abounding warmth that shines through his presence on the stage, but, foremost, his ability to fuse blues, jazz, pop, and classical in one piece. I have seen some great jazz pianists and the only ones I remember having this ability are the late Oscar Peterson and Claude Bolling. At one point in his performance, in the middle of an arpeggio, Davis turned to the audience, slyly smiling, as if to say, “look, Ma, no hands!” I will go out on a limb and predict that Copeland Davis is destined to go way beyond the Florida market. Although his You Tube performances were not recorded under the best conditions, depriving him of the showcase he deserves, here is one I loved: