Something for students of Sondheim.  Something for lovers of shtick.  Something for supporters of South Florida theatre.  “Something for everyone – a comedy tonight!”  MNM theatre company knocks A Funny Thing Happened on the Way to the Forum out of the Coliseum at the Rinker Playhouse, part of the Kravis complex. 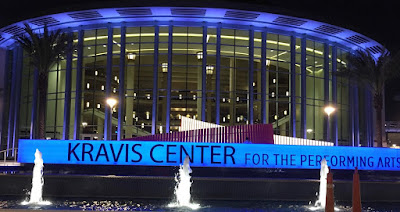 It is thought of as Sondheim’s first musical for which he wrote both the lyrics and the music.  It is and it isn’t.  His first such attempt, Saturday Night, was written eight years earlier, but it never made it to Broadway at the time (although that was where it was headed) as the Producer suddenly died and the bankroll evaporated.  It reflected his youth of being only 22, a traditional musical, so unlike his later innovative works.  Still, the unproduced musical put him on the radar scope and he was soon sought out as a lyricist, with such shows as West Side Story and Gypsy.

Sondheim however wanted to be a composer-lyricist; thus, indeed, A Funny Thing Happened on the Way to the Forum IS his first Broadway credit in both capacities.  For any Sondheim fan, it is a must see musical for that reason alone.  It clearly reflects his genius as a wordsmith, although one can also detect his unique musical gift incubating, particularly in the duets.  And it is the lyrics and “the book” by Burt Shevelove and Larry Gelbart (of M*A*S*H fame) that made, and continues to make this early Sondheim work a success. It unfolds at a hilarious frenetic pace and it immediately grabs the audience’s attention with “Comedy Tonight."

The mad cap farce involves a conniving Roman slave (Pseudolus) who wants his freedom while his master (Hero) wants the virginal girl next door (Philia), and so the slave concocts a plan to achieve his master’s desire IF he will give him his freedom.  Sounds pretty straightforward except every complication known to vaudevillian theatre is thrown in the way.

So, kudos to MNM Productions for bringing Sondheim’s vintage, formative work to the Rinker Playhouse.  MNM’s mission is to “showcase talented Florida-based actors, Equity and non-Equity alike, live musicians and a top-notch crew of designers and technicians.”  With this show, mission accomplished! It is a professional production in every way, particularly due to the talented cast whose voices soared in the ensemble musical numbers.

Johnbarry Green who we have seen perform locally at the Maltz and at Palm Beach Dramaworks, plays the iconic part of Pseudolus  (Sondheim originally thought of the fast talking Phil Silvers when he was writing it, but it was Zero Mostel who first played the part on stage and in the movie so it is he who is traditionally identified as Pseudolus).  It’s a tall order and the entire production depends on Green’s ability to successfully pull off this buffoonish role and sing and dance and basically knock himself out for 2-1/2 hours.  Within minutes he has the audience laughing so that possible hurdle is comfortably cleared.  In fact, throughout the performance Green shows his comic physicality and even had to ad lib on stage when he almost fell off a bench, turning to the audience who drew in its breath in anticipation, saying “It’s OK, don’t worry!!” not missing a beat.  Only live theatre can convey such a special moment.

Green is all over the stage throughout the production, just one of the many details of the show’s complex choreography so seamlessly arranged by Laura Plyler.  But in Johnbarry Green’s performance, “a star is born.”  He has all the acting and comic chops and a rousing voice that enhances his performance.

J Savage plays Hero the young master who is so naively induced into Pseudolus’ increasingly complicated scheme with wide eyed wonder of innocence, his heart set on having the virginal Philia who was entrancingly played by the beautiful Meg Frost.

Hero’s father and mother were skillfully performed by Troy Stanley as the lecherous Senex, clearly carrying the burden of being the henpecked husband of Domina who Aaron Bower plays up as a shrew to be feared.  The pivotal role Hysterium is truly hysterically acted by Michael Scott Ross.  He is not on the stage for a moment without a laugh. Terry Hardcastle plays the owner of the house of courtesans, Marcus Lycus, who is willing to agree to any of Pseudolus’ plans as long has he is not in jeopardy.  The character Erronius is condemned to wander around the stage most of the night looking for his children who were stolen as infants by pirates.  Paul Thompson’s portrayal of the old man received greater laughs after each turn around the 7 hills surrounding Rome. And his plight is part of the show’s resolution.

Another star in the show bursts forth near the end of the first act, the arrival of Miles Gloriosus, a Roman Captain who has a claim on Phila (part of the plot’s complication).  Miles is indeed gloriously played by Sean William Davis.  (Think of the bravado of Lancelot singing “C'est Moi" in Camelot.).  Davis just oozes Majesty and sex appeal on stage, while his voice is clear and powerful.  Yet he, too, is duped by Pseudolus.

The courtesans –  “Tintinabula, Panacea, Geminae Twins, Vibrata, and Gymnasia” – are so amusingly and seductively played as their namesakes by Meredith Pughe, Alexandra Van Hasselt. Victoria Joleen Anderson, Alexandra Dow, Lauren Cluett, and Ashley Rubin respectively, while ”The Proteans” who are called upon by the characters to play different roles to move the comedic plot along are entertainingly and sometimes acrobatically played by Stephen Eisenwasser, Frank Francisco, and Elijah Pearson-Martinez.

This classic production is under the capable directorial hand of Jonathan Van Dyke who also coordinated the costumes and a special mention should be made of the original set design by Cindi Taylor and superb wigs by Justin Lore.  Lighting Designer is Rachel Weis. Sound Engineer Vincent Bryant’s work excelled: rarely have we been at a performance where every word can be clearly heard, whether said or sung, so important in this production.  Even James Danford came out of retirement briefly to serve as Stage Manager, no small feat in this show. Paul Reekie serves as a musical director of a band of six which in the intimate Rinker Playhouse sounds like a full Broadway orchestra.

I mention all these names as they are South Florida actors and theatre technicians who deserve our support, especially as together they created a “pretty little masterpiece” (as sung by Pseudolus in the song “Pretty Little Picture”).

When I write in this space I attempt to avoid political topics.  But sometimes you get to the point of screaming invectives and this is the only place to rationally collect thoughts and get it all out.

My over-the-edge moment was the language that DJT used to describe the Special Forces operation to take down al-Baghdadi.

I wanted to wait for the exact transcript to be published to make sure I heard what I thought I did.  Courtesy of NPR, here is some of what he said, as well as my reactions.

We thought, for three days, this is what was going to happen. It was actually — look, nobody was even hurt. Our K-9, as they call — I call it a dog, a beautiful dog, a talented dog — was injured and brought back. But we had no soldier injured. And they did a lot of shooting, and they did a lot of blasting, even not going through the front door. You know, you would think you go through the door. If you're a normal person, you say, "Knock, knock. May I come in?" The fact is that they blasted their way into the house and a very heavy wall, and it took them literally seconds. By the time those things went off, they had a beautiful, big hole, and they ran in and they got everybody by surprise.

I call it a dog?  A beautiful dog?  A talented dog?  A lot of shooting, a lot of blasting, you would think you go through the door? Knock, knock, may I come in?  A beautiful, big hole?

He was asked how did he see exactly what happened.

Well, I don't want to say how, but we had absolutely perfect — as though you were watching a movie. It was — that — the technology there alone is really great.

Then, the self congratulatory moments:

I kept saying, ‘Where's al-Baghdadi?’ And a couple of weeks ago, they were able to scope him out. You know, these people are very smart. They're not into the use of cell phones anymore. They're not — they're very technically brilliant. You know, they use the Internet better than almost anybody in the world, perhaps other than Donald Trump. But they use the Internet incredibly well… and that's why he died like a dog, he died like a coward. He was whimpering, screaming, and crying.

They use the Internet better than anybody…[but] Donald Trump?  He died like a dog?  (I get it, colloquial street talk but an insult to dogs everywhere!)

All the late night TV shows have made appropriate comic fodder of it all.  But this is the President of the United States talking aimlessly, irresponsibly, putting himself front and center of a very dangerous but successful mission.

DJT is obviously not a “dog person.”  Although dogs love unconditionally, it would be hard even for them to warm up to such a person. 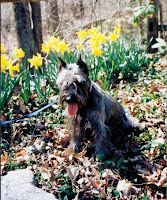 Our last dog, Treat, a Miniature Schnauzer who was born on Halloween, and thus her name, was ill for a year before she died.  We took her to vets, even for Acupuncture.  But we could see it was a losing battle and she did too.  She looked at us with mournful eyes one day, lying in her bed.  We agreed we had to end her pain and ours.  This decision was made on, of all days, the very day we were going to my mother’s funeral.  We called the Veterinarian before we left to bring her in afterwards to euthanize her as we did our last Schnauzer, something we never wanted to go through again.  But it was time.  When we got back from the funeral, she had just passed away, peacefully in her bed, almost as a gift to us.  We still miss her so much.

DJT’s entire speech and press conference revealed a person who lacks the characteristics of man’s best friend, loyalty, gentleness, affection, and courageousness.  Thankfully, a dog had our Special Forces’ back.  Trump’s elementary school level oratory abilities alone expose his lack of leadership skills, as well as his severely damaged psyche.  This is not the behavior of a President of the United States.  And it makes me fearful of ever having to face an immediate national crisis on his watch.