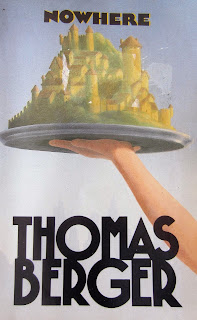 This is but another novel I took along for the trip, but did not get around to reading it until I returned.  Although I finished it a while ago, it's been on my mind.

Part Franz Kafka, part Woody Allen, and throw in a touch of Mickey Spillane, unlike any book I've read in a long time, Nowhere by Thomas Berger is a dystopian view of the "future" which, as it was written in 1985, might as well be now.  It's about a second-rate gumshoe (he's no Mike Hammer), who aspires to be a playwright, but never seems to get the second act done, who slides down a rabbit hole into the "Kingdom" of Saint Sebastian, ostensibly on "assignment" by the US Government to find out something about the little Kingdom, its monarch, Prince Sebastian XXIII.  It is a little like the country of "Duchy of Grand Fenwick" in The Mouse That Roared, one of my favorite films about the Cold War, but far more bizarre.

Things appear to be topsy-turvy in the Kingdom, but are they?  Children are formally educated by being forced to watch take-offs of old Hollywood movies, Blonds are second class citizens and in fact are "obliged to have sexual relations with anyone who asks them," and although "condemned to menial work, waiting on tables, pulling rickshaws, they also "practice law (people can be severely punished for rudeness) and certain other professions that are more or less honorific elsewhere"  As Russel Wren, our protagonist comments, "and it should be noted that the Blonds are splendid physical specimens, tall and strong and comely, unlike any other oppressed people on record."

There is a "government" which functions like a parody of Alice In Wonderland, where "official scholars" maintain an encyclopedia for the land which no one reads as it is completely idiosyncratic, and hopelessly out of date.  Lawmakers are hard to be found or are completely ineffectual.  And our Prince is a corpulent over-eater, who encourages sodomy throughout the land, but one who is also considered by the people (that is, the non-Blonds) to be benevolent.  No wonder, there is unlimited credit in the country.

Our perplexed gumshoe has an interesting exchange with a clerk concerning credit and economics at the Sebastian cable office (whether and where cables go is unclear):

"Saint Sebastian is then a microcosm of Europe? Surely you have as well your own Versailles, Brandenburg Gate, and Erechtheum with a Caryatid Porch?"
He shrugged in satisfaction. "We are peculiarly blessed, I must admit. For that reason we Sebastianers are not great travelers."
"Also, on leaving the country one's overdraft and credit balance must be paid, no?"
"In fact that would be against the law."
"To leave the country?"
He shook his head. "No, no: to discharge one's debts in toto."
"Can you be serious?"
The clerk spoke gravely. "It would be a profession of lack of faith in one's countrymen. No crime could be more heinous.  Every Sebastianer has a God-given right to be owed money by others. Only in this way does he establish the moral pretext for running up his own large debts. Else our economy would collapse."
The dismal science has never been my strong suit. Whenever I've tried to understand how, in the same world, filled with the same people, buying and selling the same things there can be regular periods of great prosperity, followed immediately by recessions, my brain spins on its axis (this would make sense only if the good times resulted from the purchase of Earth goods by visitors from Mars, who however on the next occasion took their business to Jupiter).
If you say so" was my response.

As it is in part a "mystery" novel, I'll not let on about the final resolution, but, hint, there is a Sebastiani Liberation group -- one of the reasons Wren is thrown into the rabbit hole in the first place.  Blond Olga, who Wren first meets as a stewardess on the Sebastiani Royal Airline, is connected to the group, explaining to Wren "Foreigners sometimes do not understand our vays.  Ve do not have to screw under every circumstance," just a little foreshadowing.

Written in 1985, Berger's book is one to be read today and to be pondered, and to be enjoyed for its ironic, satiric sense of humor.
Posted by Bob at 1:42 PM