Mark Lamos, Westport Country Playhouse’s Artistic Director has done it once again.  A couple of years ago he bravely produced and directed Samuel Beckett’s HappyDays, a daring choice I thought to celebrate the Theatre’s 80th anniversary. 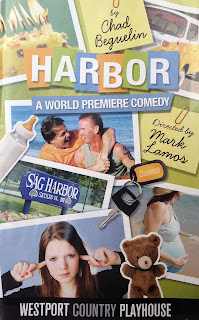 And now he has chosen to produce and direct a new play by a new playwright, Chad Beguelin, always a risky endeavor for a theater.  Our beloved Florida Stage took that route,and it paid the price during the recession, having to close its doors after so many years.  Unlike the Westport Country Playhouse, the Florida Stage made the production of new works its specialty, rendering it even more vulnerable.  Excellent new plays are hard to find and harder to produce.

So, kudos to Mark Lamos in choosing Chad Beguelin’s first play (although he has been successful as a musical bookwriter and lyricist).  Lamos put the play and playwright through a workshop process to improve the script and what has emerged, as directed by Lamos, is a play which is Neil Simonesque in its dialogue, pacing, and mix of pathos and humor.

Although a harbor is “a sheltered part of a body of water deep enough to provide anchorage for ships,” it is also “a place of shelter; a refuge,’ the kind of place when one thinks of “family.”  But the definition of family is drastically changing, as has the area in which the play takes place, modern day Sag Harbor, once a whaling town and now one of the hot spots of the Hamptons.  Coincidentally, it is also where my own dysfunctional family vacationed during the summer months when I was a kid and years later, where Ann and Iwould often take our boat for a nostalgic weekend, thus occupying a special place in my memory.

Neil Simon was once asked what he would advise new playwrights about writing comedy, and he said they should “not to try to make it funny. Tell them to try and make it real and then the comedy will come.” This is precisely what Chad Beguelin has done in Harbor, a modern day tale of a gay couple, together ten years, and living in Sag Harbor. Ted, is the successful architect, and his partner is Kevin, the perpetually aspiring writer (the same novel ten years in the making), whom Ted supports and enables.

In the great tradition of American comic-drama, the dysfunctional family is at heart of this play. Kevin is from an alcoholic family of “poor white trash,” the first from his family to go to college.  A catalyst is needed for the play.  Guess who is coming to visit? Kevin’s sister, Donna, who he hasn’t seen since their mother’s death, and dragging her very reluctant 15 year old daughter, Lottie, with her.  They live in a VW Camper, Donna being a knock off of the family from which she emerged while the precociously mature Lottie, through literature, is making every attempt to save herself from a similar fate.

Kevin and Ted of course do not know of the visit until Donna calls from a gas station some three blocks away.  Kevin, stunned, tries to derail the visit, knowing that something dreadful is about to happen, but there would be no play without this visit!  And from there, the action really begins.

Sister Donna has an ulterior motive for the visit, and if I begin to go into detail at this point, this commentary on the play will become a spoiler, so I will simply say that plays about gays has moved into the next phase – they have their own biological clocks ticking, pressures to become parents either through adoption or surrogate birthing.

Kevin has strong ‘mothering’ instincts but Ted is set in his ways, envisioning a life of travel and freedom after work, certainly not parenting, although, ironically, he is in a sense Kevin’s caretaker, and those feelings begin to transfer to Lottie who also needs protecting.  In fact, all the characters in the play need saving and the ebb and flow of their interaction makes for engaging and at times hilarious theater-going.

I can’t say enough about the actors, all at the top of their form, delivering some very funny dialogue and facial expressions where timing is everything.  Donna is played by Kate Nowlin who delivers caustic wisecracks that has the audience laughing.  Any time she’s on the stage, she is a presence.  Special accolades to Alexis Molnar, a high school senior, who plays Lottie with such poise you would think she’s been around theatre since she was born.

Both Bobby Steggert who plays Kevin and Paul Anthony Stewart as Ted were flawless in their role as a gay couple trying to adapt to the intrusion of these two women into their lives and the truth they are forced to face about their own relationship.

I think of this play as a beginning of a new phase in American theatre, finding its roots perhaps in the works of Neil Simon, or A.J. Gurney (who, coincidentally was in the audience last night and whose works we have enjoyed over the years) but blazing new trails to reflect the changing mores of the times.  We love the revivals of the tried and true classics we see at our favorite West Palm Beach theatre, Dramaworks, and hope this play will not only make it there one day but for sure to other enlightened regional theatres throughout the country.  Congratulations to the Westport Country Playhouse for having the foresight to stage a ‘world premiere comedy’ and to Mark Lamos for his encouragement and expert direction.  And may we enjoy other new plays by Mr. Beguelin who has the right stuff as a playwright. 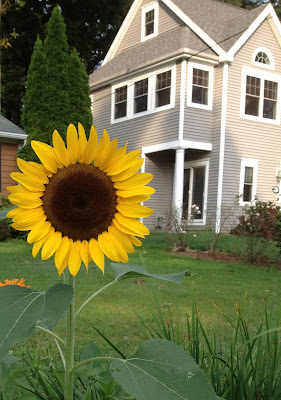