On several disparate topics, sort of a "catch up" posting.

First and foremost, the Boston bombings, deplorable, despicable, cowardly. The stark, almost naked vulnerability of the runners, makes it especially gruesome to me, and on Patriot's Day in Massachusetts, the symbolism of the act is unambiguous.  If it was carried out with assault weapons rather than the anonymity of trash can bombs, would it speed  national gun control legislation as Connecticut commendably passed?  I wonder, but violence in our great land is intolerable and must be dealt with through education and legislation and improved economic opportunity for all. 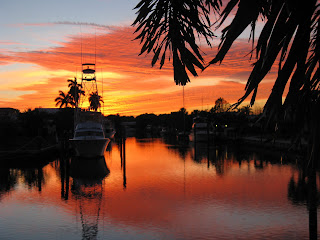 Then, on a less important subject, but a continuing frustration, is the foolishness of the Florida Legislature which is actually considering massive increases for windstorm insurance coverage through its state supported "Citizens Insurance."  The unintended consequences of such an increase will destroy the nascent housing and construction recovery and, long term, turn coastline communities into ghost towns, the very communities that draw tourism, Florida's most important revenue source.  The "need" for such an increase is to buy even more reinsurance for a once in a hundred year storm but one has to wonder how much the insurance industry has cozied up to Florida legislators.

As it is, there is a "cauldron of misconduct alleged at Citizens Property Insurance" but as a state designed and operated institution, it seems to be immune to corporate codes of ethics. The bottom line is the entire state is vulnerable to destructive weather, be it hurricanes, or tornadoes, and the state needs a plan other than a usurious tax on coastal citizens.  It could create its own reinsurance pool with a quarter of a percent sales tax increase (some of which would be paid by tourism), with, of course, still higher insurance rates for coastal homes, but not at levels that would destroy those communities. 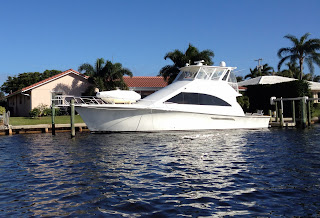 Our friends Ray and Sue were briefly here, making a detour on their way back to Connecticut from the Abacos on their boat 'Last Dance.'  Always wonderful to see them and to learn more about their living full time on their boat as well as being part of a boating community in the Bahamas, the Royal Marsh Harbour Yacht Club -- scores of boaters doing the same thing during the winter (although most have homes to go back to in the summer).

So Ray and Sue arrived here on Sunday and I followed them on "Spot Me" which broadcasts their position every twenty minutes or so superimposed on Google Maps.  A remarkable technology.  Here's their last leg of the trip from the Bahamas to here.

I helped them untie their lines on our dock early this morning and they've begun their 1,200 mile trek "home" to Connecticut where we will join them on our boat later this summer.

Earlier this month, Ann took me to see my first opera since my college days, Richard Strauss' gruesome Salome, at the Kravis Theatre in West Palm Beach.  I went as much for the spectacle as I did to understand how Ann has "spent all that time" for the last decade with season's tickets.  She usually goes with her friend, Lois, and there they meet our friend Roy, who we also see at the Dramaworks functions, for a bite of lunch beforehand,.  Ann and I were photographed with characters from next year's program of operas. 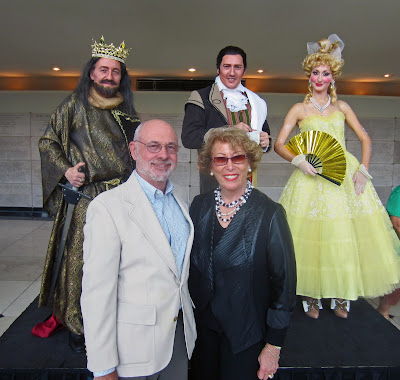 I used to apologize for not liking Opera (Stephen Sondheim, however, gave me permission).  It was a epic spectacle to see Salome, the main part being sung superbly by Erika Sunnegårdh and it was helpful to have the English translation in the subtitles overhead.  The music is almost oppressively beautiful, but, to me, the staging seems so wooden compared to, say, a Sondheim musical.  Perhaps it measures up to Sweeny Todd for the bloodiest musical stage production.

A notable article appeared in the April 7 New York Times by André Aciman, How Memoirists Mold the Truth.  It certainly hit home with me as most of what I write is indeed memoir and I know exactly what he means by the following:

Writing the past is never a neutral act.  Writing always asks the past to justify itself, to give its reasons...provided we can live with the reasons.  What we want is a narrative, not a log: a tale, not a trial. This is why most people write memoirs using the conventions not of history, but of fiction.  It's their revenge against facts that won't go away ...And maybe this is why we write.  We want a second chance, we want the other version of our life, the one that thrills us, the one that happened to the people we really are, not to those we just happened to be once.  There is a lot more to take away from this profound article, but it reminds me of the fine line I sometimes walk between fact and fiction trying on the one hand to be truthful, but sometimes circumventing facts, frequently to keep certain people anonymous, and perhaps to remember the past as I would have liked it to be (frequently being unable to distinguish it from the real past which, ironically, it really may be!). I must confess it's also a delicate balance between honesty and privacy.

But my writing has led me to places and people (although I do not have a comment section, an email address appears in my profile) and most recently I was contacted by someone I hired 44 years ago.  She had found me through my blog and wanted me to know that I served as an important mentor (unknowingly to me) to her early in her career.  Since then she has gone on to very significant accomplishments, in business, and, more importantly, in her empathic quest to make a difference in one of the great tragedies of the past decade in our economy: the high unemployment rate and its impact on individuals (statistics aside).  I might say more regarding our distant relationship over the a narrow alleyway of time, but that will have to wait.

My blog will probably go quiet for a while as I am preparing a piano program and will be recording it at a studio, so lots of practice in the days ahead.  I'm calling it "Music Makes Us" after a quote from David Byrne's recently published How Music Works: "We don't make music; it makes us." How true. And we are sort of defined by the music we listen to. For myself, it is the Great American Songbook, music we sometimes refer to as "The Standards."  I'll have more to say about this, and the specific pieces, after I've taken this on, difficult for me, a mere amateur, but isn't that what an engaged life is all about, setting demanding goals and doing one's best to attain them?  I've used those piano skills to bring some joy to people in retirement homes and will continue to do so.  It's makes all that time and commitment that much more meaningful.

Meanwhile, I leave with a photograph of our seasonally flowering pink Bougainvillea tree, highlighted by my lovely wife, Ann. 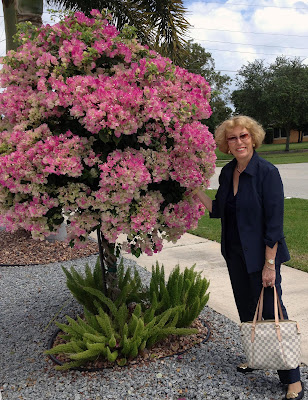