"Hubris often indicates a loss of contact with reality and an overestimation of one's own competence or capabilities, especially when the person exhibiting it is in a position of power."...Wikipedia.   Hubris and boating are a deadly mix. 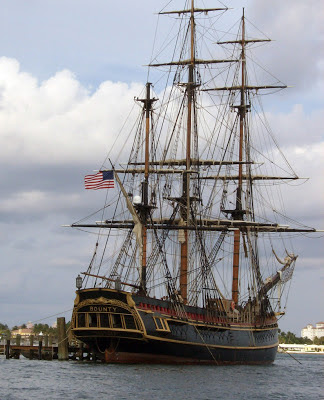 Sunk: The Incredible Truth About a Ship That Never Should Have Sailed  tells the nightmarish story of the replica ship HMS Bounty's last days at sea, and the events leading up to her Captain's decision (Robin Walbridge) to put out to sea as monster storm Sandy was making its way up the coast.  As the investigation is not yet completed, perhaps "hubris" is the wrong word, but this thorough, unbelievable account published by Outside Magazine seems to point that way.  Captain Walbridge charisma enlisted the support of his crew in his decision to depart New London, CT in advance of the storm, the ultimate objective to sail to St. Petersburg, FL, some 1,400 nautical miles away.

As the article recounts, the HMS Bounty was a ship with a long history of difficulties.  It was a money pit with unceasing hull leakage and engine systems that one crew member described as “definitely patched together.” (Thus it could never be certified by the Coast Guard as a seagoing passenger vessel.) On the other hand, Walbridge had challenged bad weather before, and always came through.  The crew was well aware of that and apparently were willing to follow him to hell. 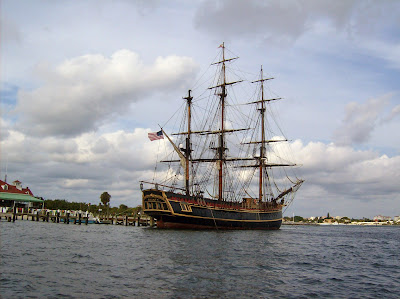 The plan "was to sail due east, wait for Sandy to turn toward land, and then push the vessel into the storm’s southeast quadrant, where hurricane winds are usually weakest. Why he so quickly abandoned that idea once at sea remains a mystery."  As soon as the ship rounded Montauk Point, it made a heading of 165 degrees,  south by southeast, right into the fury of Sandy. 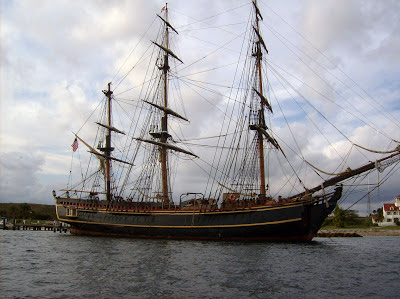 The harrowing account of the rescue of most of the crew by the Coast Guard is told here in detail.  Unfortunately, in addition to never recovering Captain Walbridge who went down with his beloved ship, one crew member died, the least experienced of all, Claudene Christian, who was reportedly the great-great-great-great-great granddaughter of Fletcher Christian, the acting Master who led the famous Mutiny on the Bounty in the 18th century.  Such is normally the stuff of fiction. 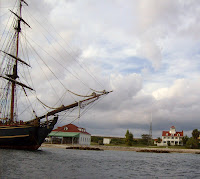 The replica HMS Bounty was made for the 1962 movie with Marlon Brando.  "The ship was supposed to be burned for the film’s final scene. Hollywood legend has it that Brando threatened to walk off the set if the vessel was destroyed."  So began its long history as a moored attraction vessel with Robin Walbridge as the driving force in preserving it -- all the more inexplicable his decision which ultimately led to the Bounty's demise and his own untimely death.  As I said in my entry on the Costa Concordia disaster, "whether you are piloting a large ship or your own recreational vessel, most nautical disasters are the result of its Captain being overconfident." 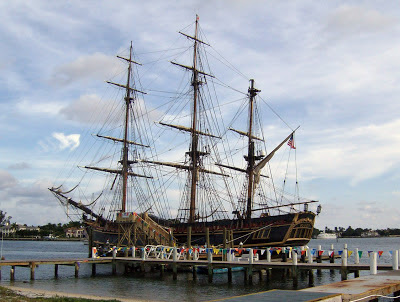 During its lifetime, it sailed to many destinations, sometimes to Europe but mostly the Northeast coast, Florida, and the Caribbean.  We've seen her before during our own trips, most recently in Puerto Rico last year.  In 2009 she visited Peanut Island at the Lake Worth inlet in West Palm Beach, and my son, Jonathan, and I went to see her.  Farewell, HMS Bounty. 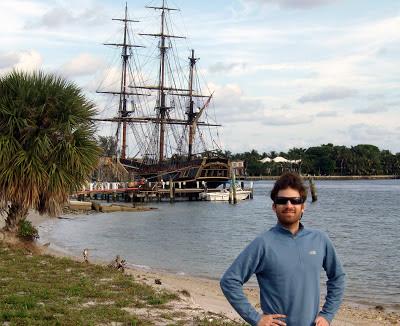