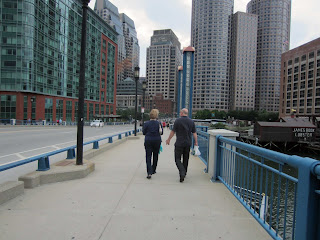 The last weekend of July we drove up to Boston to see our son, Chris. The plan was to check into the Downtown Doubletree, leave our car, and eventually meet up with Chris at his new apartment in the gentrified Seaport district. We used my new Uber account there for the first time. Had we known how easy and inexpensive it would be we could've stayed further outside the center of the city. After having lunch with him we enjoyed a long walk around the Rowes Wharf, only steps from his home, with a beautiful view of tall ships and small fleets of pleasure boats and pedestrian bridges overflowing with visitors.  Chris’ new apartment is in a completely redesigned building from 1899, his huge window facing directly into the Federal Reserve building with incredible views of downtown Boston, a professional building in every way.  This makes his life much easier, being able to walk to work as a data systems supervisor for an investment firm, a job he loves (how many people can say that nowadays?).  We capped off the visit with a great dinner at Smith and Wollensky. 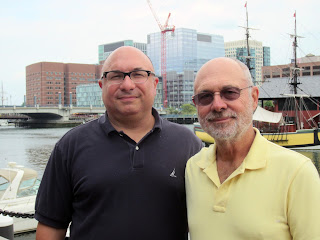 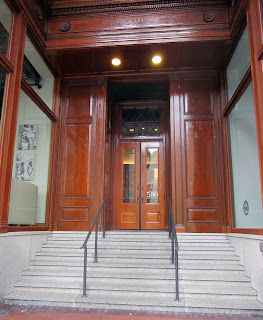 The next morning we drove to Amherst to visit our friends Art and Sydelle who are renting a house near their daughter and her family. After meeting them for lunch at Atkins Farms, they took us to the Yiddish Book Center which houses the largest collection of Yiddish books in North America on the campus of Hampshire College. 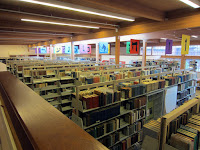 It was one man’s remarkable vision to preserve over one million of these treasured books.  It was truly amazing to see this literature being reclaimed and now digitized by a team of volunteers.  I had no idea that there was such an extensive trove of Yiddish literature.  When we departed from our friends, Ann and I decided to revisit The Emily Dickinson Museum, one of my favorite places in Amherst and once again signed up for their 60 minutes tour.  Since we were last there some of the rooms have been further restored, particularly Emily’s bedroom where she spent her days writing in a bright corner overlooking much of downtown Amherst. 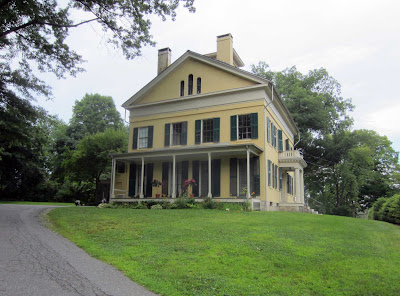 Before the tour I had some fun reciting some of the poems I know by heart in unison with one of the docents.  I also chatted with a Chinese woman who had breathlessly arrived, fearing she was late for the last tour of the day, having driven three hours with her husband and child.  She was no stranger to Emily Dickinson’s poems, having translating many into Chinese for publication there.  We chatted about the similarities between Dickinson’s and Chinese poetry, which on their surfaces boast simplicity, with deep, meaningful undercurrents. 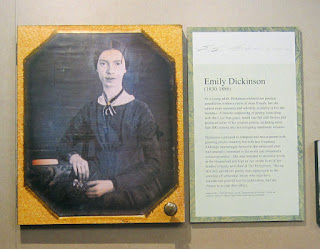 We returned to our hotel to freshen up for dinner with Art and Sydelle, their daughter Maddy, and her young and precocious son, Eli.  Unfortunately there was a massive thunderstorm on the way and the restaurant where we were to meet for dinner was closed that night.  Serendipitously, we ended up meeting everyone at a wonderful Chinese restaurant where we ate family style, happily sharing several delicious platters of food!

Bright and early the following day, we were on our way to The Clark Art Institute in Williamstown situated on a 140 acre campus, surrounded by the Taconic, Green Mountain and Berkshire ranges.  This was our first visit and we were very interested in seeing the new very modern entrance addition and 1 acre reflecting pool set amid expansive lawns. 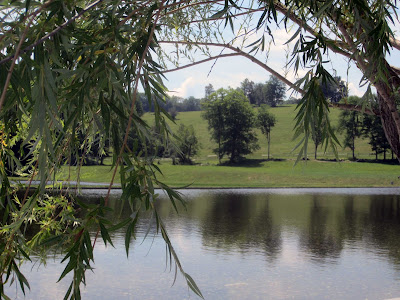 But in truth we made this special trip because they have just installed the first ever exhibit on “ Van Gogh and Nature”, using works on loan from some of the most noted van Gogh Collections in the world.  These paintings were primarily from the last 10 years of his life and were showcased in five rooms in the new wing of the Museum. 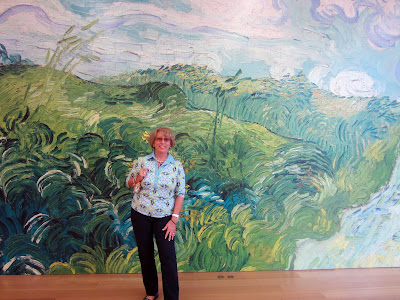 Getting there proved more difficult than we could have imagined. It was all back roads to Williamstown from Amherst, roads I normally love to travel, but the bitter winter had left its mark on New England.  It seems every other turn was blocked with detours because of roadwork and at one point we were having difficulty getting there.  So we arrived about an hour later than we had hoped but luckily got one of the last parking spaces within walking distance to the museum.  The entrance reminds me of the monolith from the film 2001 – a granite enigma – trying to figure out how to get in! 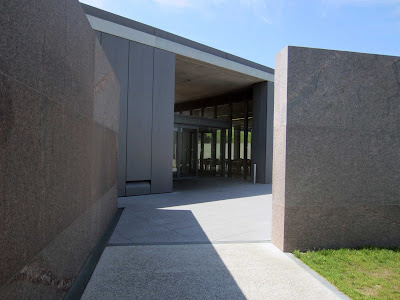 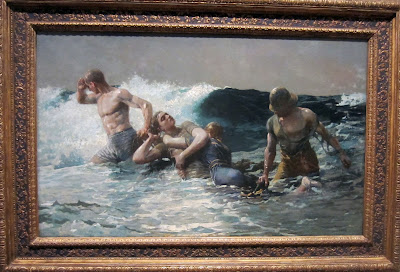 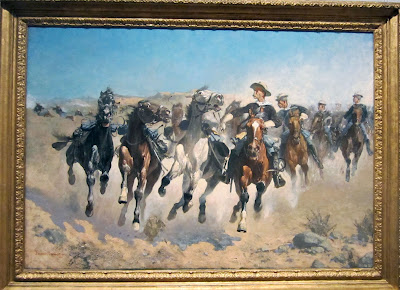 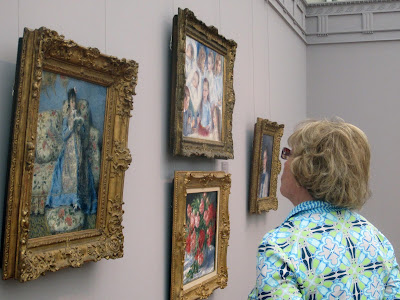 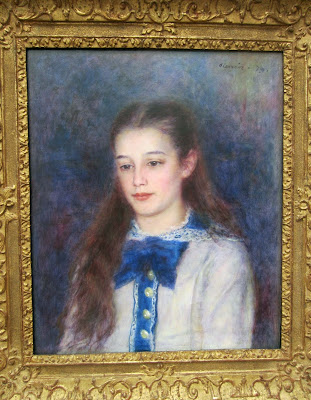 Perhaps the high point for me, though, was the display of the grandest Steinway ever made, the Model D Pianoforte Steinway which was commissioned by financier Henry Marquand in 1885. 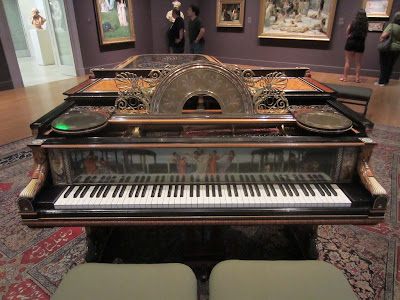 In between seeing the Van Gogh and the permanent collection, we paused for a wonderful lunch at one of the Clark Institute restaurants.  By mid afternoon we started to think about the long ride back to Norwalk, half the distance on local roads and again we had to zig and zag, making it a long and grueling four hour trip home. 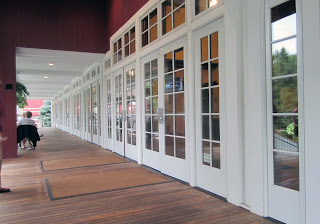 Only two nights later we had tickets to the Westport Country Playhouse to see A R Gurney’ s Love and Money, a world premiere.

I’ve written about the Westport Country Playhouse before, a venerable landmark in Westport since the early 1930’s.  Just one look at some of the old billboards and memorabilia in the lobby evokes deep and fond memories. We’ve been going there for some 45 years now, and while it has changed, it has changed to stay the same, to present plays of meaning to the community. 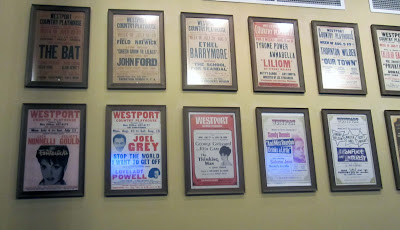 For many years Paul Newman’s restaurant, The Changing Room, stood adjacent to the playhouse (both Paul Newman and Joanne Woodward were active in the theater’s success).  Now Positano -- which had been near the beach -- moved into that space and Ann and I had dinner there before the show, an enjoyable dining experience. 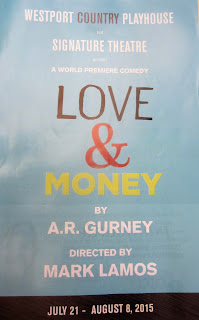 What better place to premier A.R. Gurney’s Love and Money than the Westport Country Playhouse, near the center of the universe of the play’s subject, the enigma of the WASP?  Cheever had defined the very species and Gurney has now attempted to dramatize its fading years of glory.

Gurney used more than a dozen Cheever short stories to create his vision of what Cheever might have composed himself if he were a dramatist.  I’ve never seen the play performed but maybe it will be revived on the heels of Gurney’s new play.  Cheever and Gurney are students of this privileged, melancholic, frequently inebriated class, one to which it is time to say goodbye.

Unfortunately the play is not primetime ready yet and although the cast includes the consummate actress Maureen Anderman, who not long ago we had seen at Dramaworks in A Delicate Balance, her presence is not enough to save what we thought was a very contrived plot intended to mark the passing of the WASP species. Unlike Cheever, whose characters mostly aspired to money or had the pretense of money, this is about real money and how it alters relationships. 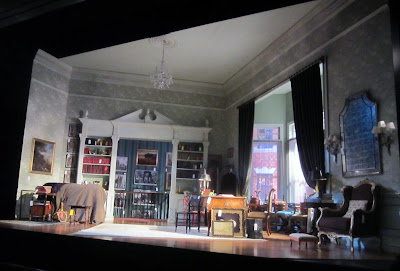 Cornelia Cunningham (Maureen Anderman) feels tainted with loads of WASP money from her deceased husband.  Her two children had directly or indirectly been destroyed by their wealth and/or alcoholism, and she is determined to leave most of her money to charity.  Against the advice of her attorney, Harvey Abel (“ably” played by Joe Paulik), she has no intent to leave the money to her two "zombie" grandchildren and then, suddenly -- a young black man arrives on her doorstep claiming to be the child of her deceased daughter – and thus another grandchild has been added to the mix.  Let the drama and comedy begin! – or at least attempt to begin.   From there a number of non sequiturs that don’t seem to be organic to the plot are thrown at the audience, F. Scott Fitzgerald, Cole Porter, and a number of zingers at the encroaching political oligarchy and foibles of modern day life.

Cole Porter of course is emblematic of the WASP culture and a couple of his songs are suddenly introduced as a young Julliard student, Jessica Worth (Kahyun Kim), comes to inspect Cornelia’s player piano which is programmed to play only Porter, Jessica bursting into song.  The young black man, Walter Williams (played by Gabriel Brown) who is after his own fortune, claims he is nicknamed “Scott” because of his love of Fitzgerald (who ironically lived in Westport briefly with Zelda) and in particular his affection for The Great Gatsby.

While Love and Money is billed as a world premiere production, it is a play in development, gearing up for an off-Broadway run at the Signature Theatre.  It needs work -- an organic fluidity that seems to be lacking and a more believable plot.

In the program notes Gurney says at the age of 84, I assumed this play would probably be my last.  As its various characters leave the stage at the end, I felt I was figuratively going with them.  But now that the excitement of an actual production is taking place, I am reminded of an adage from the Jewish culture, which is in many was replacing us: “Wasps go without saying goodbye.  Jews say goodbye and won’t leave.” So now, in my golden years, with perhaps another play or two already churning around in my head, I’ve decided to be Jewish.   Let us hope one of our great social-comedic playwrights has a few more plays up his sleeve, and improves the present work.  Perhaps he should reread his own A Cheever Evening? 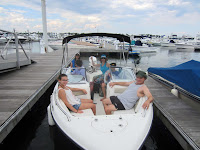 To conclude our busy week, Ann’s niece and nephew Regina and Angelo visited with their growing children, Forest and Serena last weekend.  We haven’t seen them in a year and a half – what a difference time makes when kids are approaching their early teens.  Jonathan and Anna were here as well, for lunch and then a boat ride on a beautiful day. 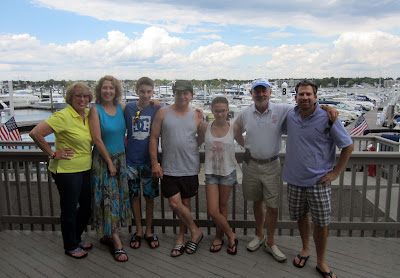