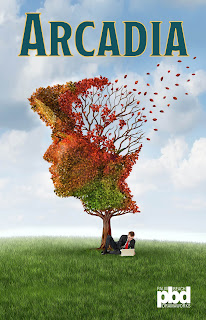 Tom Stoppard’s masterpiece Arcadia is a play of ideas.  Although the love of learning is a central theme, it explores the dangers of deducing history from tidbits of clues.   Matters of the heart and sexual desire are laid bare, as well as the connectedness of all who have come before and those who will follow, questioning the very fate of the human species.  Conflicting views of free will vs. determinism, chaos vs. predictability are among a dizzying array of concepts explored, and yet the play is basically a farce, laugh out loud at times.  The language is elegant, poetic, and profound, even Shakespearian.

Arcadia is a challenging play to produce and equally challenging to watch, Stoppard asking the best from both sides of the 4th wall.  If you are willing to let the ideas just flow and not get caught up in the myriad cerebral details, Dramaworks delivers the goods in a remarkable production.

The action takes place in the Coverly’s country home in Derbyshire England, Sidley Park, alternating from scene to scene between the early 19th and the late 20th centuries.  One is an age of change as Classical is giving way to Romanticism, only years after the American and French Revolutions.  This part of the play is juxtaposed to the beat of today’s scientific and exploratory pulse.  The 20th century characters are trying to unravel what happened there nearly 200 years before from remnants of documents and some preconceived assumptions.

In 1809 a brilliant 13 year old mathematics and science student, Thomasina Coverly, is being tutored by a gifted young man, Septimus Hodge.  She spurns his preference for Euclidean geometry, seeing instead – way before her time – a more complicated mathematical representation of nature itself.  She also craves a more thorough knowledge of “carnal embrace” as she is cognizant of a number of sexual dalliances happening on the estate.  Both roles are played by actors making their PBD debuts.  Caitlin Cohn is the playful and mercurial young genius Thomasina, who hangs onto every word her tutor utters.  Although Cohn is only in her early 20’s, she is an experienced actor of exceptional talent, craftily mesmerizing the audience.

Ryan Zachary Ward’s Septimus is an attentive teacher and scholar who never is at a loss for words.  His performance is always riveting, whether he is toying with an adversary or discussing a tryst, and particularly when he delivers a consoling monologue which encapsulates the play’s philosophical foundation, saying to Thomasina “…your lesson book…will be lost when you are old.  We shed as we pick up, like travelers who must carry everything in their arms, and what we let fall will be picked up by those behind.  The procession is very long and life is very short.  We die on the march.  But there is nothing outside the march so nothing can be lost to it….Mathematical discoveries glimpsed and lost to view will have their time again.”

The estate’s matriarch is Thomasina’s mother, Lady Croom, whose libido as well as her nobility must be indulged.  She is considering her landscape architect’s recommendation to abandon the garden’s classical motif in favor of the increasingly popular romantic, gothic design.  The always dependable PBD veteran, Margery Lowe, plays Lady Croom with an imperiousness befitting the role.

Septimus and Thomasina have three academic counterparts in the 20th century, each tackling a scholarly endeavor.  There is the caustic Hannah Jarvis, a published author, currently researching the transformation of the estate’s garden, as well as attempting to unravel the mystery of the “hermit of Sidley Park.”  She is in a battle of wits with Bernard Nightingale, a don who has arrived to score what he thinks will be a major scholarly scoop, that the romantic and mystical poet, Lord Byron, was in a duel at the estate and killed a minor poet of the time, Ezra Chater, currently a guest of Lady Croom. We never see Byron on stage although he is an important part of the play.

Peter Simon Hilton who plays Nightingale and Vanessa Morosco as Hannah are also making their PBD debuts.  They are husband and wife who have played opposite one another in many other productions, and they reveal that edge of familiarity, delivering Stoppard’s barbed dialogue to perfection.  Their acerbic and competitive sparring is delectable and their performances outstanding.

The 20th century estate is still in the Coverly family.  Valentine Coverly, generations removed from Thomasina, is the mathematical sleuth, frequently asked by Hannah to interpret the shreds of evidence from the past.  He too is involved in research, centering on the estate’s grouse population revealed in the records kept in the family Game books, “his true inheritance…two hundred years of real data on a plate.”  He views this data as fodder for chaos theory, another dominant theme of the play, life moving from order to disorder.  Hannah asks to what end?  “I publish,” he says and Hannah amusingly replies, “Of course.  Sorry, Jolly good.”  Valentine is played by Britt Michael Gordon (his PBD debut as well) with a breathless enthusiasm as well as a deepening frustration explaining the complexity of the mathematical concepts, all the while hoping to seduce Hannah.

Dispassionate Hannah, while rejecting the romantic advances of both Valentine and Bernard, focuses on the garden of that era, calling it "the Gothic novel expressed in landscape.  Everything but vampires."    As to the hermit, she says "He's my peg for the breakdown of the Romantic imagination... the whole Romantic sham….It's what happened to the Enlightenment, isn't it? A century of intellectual rigor turned in on itself. A mind in chaos suspected of genius. In a setting of cheap thrills and fake beauty... The decline from thinking to feeling, you see."

Morosco emphatically delivers a key takeaway for the audience as Hannah says to Valentine, “It’s all trivial – your grouse, my hermit, Bernard’s Byron. Comparing what we’re looking for misses the point.  It’s the wanting to know that makes us matter. Otherwise we’re going out the way we came in.”

Among the farcical hilarity of the 19th century sexual dalliances are those of Charity Chater who we never see on stage.  Veteran PBD actor Cliff Burgess plays the undistinguished poet, her dandy husband, Ezra, to perfection as he hopelessly and hilariously tries to defend his wife’s “honor,” challenging Septimus Hodge to a duel, demanding “satisfaction.”  This leads to an irresistibly quotable retort by Septimus, delivered by Ryan Zachary Ward with precise comic timing: “Mrs. Chater demanded satisfaction and now you are demanding satisfaction.  I cannot spend my time day and night satisfying the demands of the Chater family.”

Captain Brice, Lady Croom’s brother, is yet another paramour of Mrs. Chater who finally sweeps her off her feet and takes her, as well as her husband to the West Indies.  Brice is haughtily played with righteous indignation by Gary Cadwallader, who is also PBD’s Director of Education and Community Engagement.

Finally, the two halves of the play come together, with both the 19th century and the 20th century casts on stage at the same time, talking over one another, sometimes turning pages of books in tandem, but never interacting.  One thinks of Valentine’s statement earlier in the play, “The unpredictable and the predetermined unfold together to make everything the way it is,” as two couples, one from each century, waltz on stage.  After such an intellectual exercise, these are the tender, loving moments the audience has longed for.  Stoppard saves the best for last.

Veteran PBD director, J. Barry Lewis, had a vision which prevails throughout the play and can be appreciated by his deft handling of his talented cast.  As he said, “Symbolism is significant in the work but if it eclipses the reality that would be a failure.  It must be about human nature and the unpredictability of love. How do we filter out the noise that encroaches on our lives to find the truth?”

Lewis has been aided by an outstanding team of collaborators.  The scenic design is by Ann Mundell, her PBD debut.  Her ethereal set is a marvel to admire, representing both the classical and romantic elements.  There are French glass doors to the garden and two solid doors on each side, perfect for slamming, fast entering and exiting, as in a traditional British farce.  The monochromatic set has led veteran Brian O'Keefe’s costume designs to showcase his creativity and skill, as he said, “to develop costumes which do not disappear into the set on the one hand, but not have them be so bold that they stand out too much.” They are of course period appropriate, easily taken for granted as they so perfectly match the characters’ personalities.

Donald Edmund Thomas’ lighting design shows no distinction between the two time periods, further reinforcing connectivity.  Sound design by Steve Shapiro has incorporated the requisite barking dog, gun shots from the outdoors, and as piano music figures prominently in the play, some classical piano during the 19th century scenes, transitioning to more modern, yet still a classical feel for the 20th century.  He even dramatically clues us into the first such change by a very conspicuous roar, presumably a jet plane.

It is a large cast.  Stoppard knows how to draw distinctive, passionate characters and everyone is spot on.  In addition to those already mentioned are Dan Leonard as Jellaby, the 19th century butler who facilitates gossip, James Andreassi as Richard Noakes (PBD debut), the dashing landscape architect who is always trying to placate Lady Croom’s whims, Arielle Fishman, a flirtatious Chloë Coverly (PBD debut), Valentine’s sister who thinks sex might impact chaos theory, and Casey Butler playing two roles, Augustus, Thomasina’s bratty older brother as well as Valentine and Chloë’s mute brother, Gus.

Widely acclaimed as one of the greatest intellectual plays of the 20th century, Arcadia is brought vividly to life by Dramaworks, characters dancing at the end “…till there’s no time left.  That’s what time means.”
Posted by Bob at 2:18 PM