Drip Your Way to Retirement

Give yourself the gift of a DRIP (dividend reinvestment plan). This advice was made more acutely real to me by a recent visit of my wife's cousins and their 43 year old son, Michael (and his fiancée). I haven't seen Michael in some time and he reminded me that when he turned thirteen I had given him a birthday gift of a few shares of Exxon, with some sound advice of something along these lines: cherish these shares and enroll them in Exxon's DRIP (reinvesting the dividends for more shares), and review their Annual Reports for an education regarding how a large, resource-rich, multinational corporation functions and grows. Now, I'm not sure whether he took the latter part of the advice, but he did enroll those initial shares in Exxon's DRIP and, now, after numerous stock splits and dividend increases along the way, Michael said he now has about 600 shares worth about $49,000! By the time he retires, shares and value should continue to grow, a mighty oak tree from a mere acorn.

I fail to remember why I choose Exxon at the time rather than other dividend paying stocks. Perhaps it was because Exxon was much in the news during the 1970s energy crisis and as that crisis turned to an oil glut in the early 1980s, when the shares were purchased, Exxon's stock price was in limbo. It must have seemed like a good opportunity to buy, but no matter when one does the math, almost any time would have been fine given a thirty-year time horizon. During such a long period DRIPs are subject to a number of compounding events, the reinvestment of dividends, capital appreciation, and the growth of dividends themselves (Exxon's dividend payments to shareholders have grown at an average annual rate of almost six percent during the period).

While always having been partial to dividend paying stocks, especially in this economic environment, I admittedly failed to heed my own advice when it came to DRIPs. I am glad Michael did. 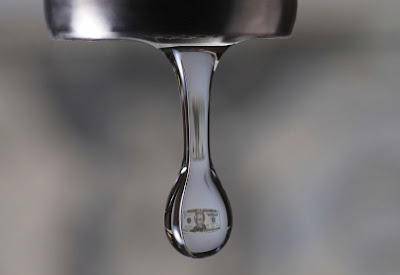