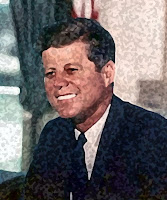 We had tickets for a concert at the Brooklyn Academy of Music that night, one of the few cultural events in New York City that was not cancelled. An unrehearsed version of Beethoven's Egmont Overture was performed rather than the regular program. We filed out, silent, stunned, weeping openly. In quick succession Oswald was apprehended, and while we watched it on TV with others in the dormitory, Jack Ruby assassinated him.

To have borne witness to them all is almost dreamlike, but Friday, November 22, 1963 is emblazoned in my mind's eye.
Posted by Bob at 6:35 AM

God, the Ninth, and Nine-Eleven

How does one reconcile the destructive events of 9/11 with the creative force of Beethoven’s 9th Symphony both coming into being in the name of God? As Friedrich Shiller’s Ode to Joy concludes -- the basis for Beethoven’s massive choral addition to the symphonic form -- “Do you sense the Creator, world?/Seek Him beyond the starry canopy!/Beyond the stars must He dwell.” And no doubt the hijackers on that fated day believed they were performing a sacred duty for their “Creator.”

I’ve been reading John Updike’s last short story collection, My Father’s Tears, interspersing those stories with other things I read, treating them like the little gems they are. Since 9/11 though I’ve made it a point to avoid anything about that horrible day, just because it is so raw in memory. We could see the columns of smoke 50 miles away in Connecticut on that crystal clear day.

So it was some trepidation when I realized that Updike’s story “Varieties of Religious Experience” is about that very day; beginning with “THERE IS NO GOD: the revelation came to Dan Kellogg in the instant that he saw the World Trade Center South Tower fall.” (He was from out of town, visiting his daughter and grandchild at their apartment in Brooklyn Heights.) To get through this story, written from various perspectives (including a woman on the ill fated flight that crashed in PA), I had to continually take deep, slow breaths, just to control my anxiety. Not that Updike capitalized on gruesome details, but there is the constant unreal undercurrent of the lunacy of that day. One knows where it is all going, and if this is what God is all about, anyone’s God, organized religion seems so hypocritical, a crutch or a means of justifying anything. One brief paragraph from the story encapsulates its essence:

Dan could not quite believe the tower had vanished. How could something so vast and intricate, an elaborately engineered upright hive teeming with people, mostly young, be dissolved by its own weight so quickly, so casually? The laws of matter had functioned, was the answer. The event was small beneath the calm dome of sky. No hand of God had intervened because there was none. God had no hands, no eyes, no heart, no anything. Thus was Dan, a sixty-four-year-old Episcopalian and probate lawyer, brought late to the realization that comes to children with the death of a pet, to women with the loss of a child, to millions caught in the implacable course of war and plague. His revelation of cosmic indifference thrilled him, though his own extinction was held within this new truth like one of the white rectangles weightlessly rising and spinning within the boiling column of smoke. He joined at last the run of mankind in its stoic atheism. He had fought this wisdom all his life, with prayer and evasion, with recourse to the piety of his Ohio ancestors and to ingenious and jaunty old books – Kierkegarrd, Chesterton – read for comfort in adolescence and early manhood. But had he been one of the hundreds in that building – its smoothly telescoping collapse in itself a sight of some beauty, like the color-enhanced stellar blooms of photographed supernovae, only unfolding not in aeons but in seconds – would all that metal and concrete have weighed an ounce less or hesitated a microsecond in its crushing, mincing, vaporizing descent?

I could not get the thought of 9/11 out of my mind Sunday when, for the first time in my life, 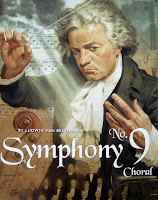 although I had listened to various recordings in the past, I saw, heard, became immersed in Beethoven’s 9th Symphony, a magnificent, ambitious undertaking of the Palm Beach Opera, performed at the Kravis Center in West Palm Beach.
Long ago in a college music history/theory course we reviewed Beethoven’s 9th and I had a copy of the score. It was the most complex piece I had ever seen, the orchestration for different sections being a mystery as to how everything can be brought together in one coherent entity. Four well-known opera soloists and four different choruses joined the Palm Beach Opera Orchestra. There were hundreds of people on stage. If there is a God, he/she/it is embodied in that Symphony, the purest ethereal expression of reverence and joy I have ever witnessed. Could it be that the same species that concocted a 9/11 could create such a masterpiece, and written by just one man who was deaf as well? So, for me, those are the bookends of this first decade of the 21st century, the infamous, wanton destruction of life and normalcy at the beginning, and beholding Beethoven’s intensely spiritual 9th Symphony at the end, contradictory undertakings in the name of “God” and mankind.
.
Posted by Bob at 11:17 AM