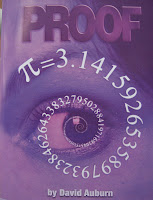 Dramaworks concludes its most successful season ever, artistically and as a professionally managed regional theater, with the production of David Auburn's Pulitzer Prize and Tony winning Proof.  We attended the first preview last night which was as polished as a regular opening night.

We've seen Proof before, most recently at the Westport Country Playhouse.  Its South Florida premiere at the Coconut Grove Playhouse was some ten years ago.  And the play, which was later made into a movie, gets conflicted with two other movies in my mind, Good Will Hunting, about a young man who is a mathematical genius but instead becomes a janitor at MIT and needs the help of a psychiatrist to straighten out his life, and A Beautiful Mind, a story based on the life of John Nash, a real-life mathematical genius who, what else, happens to be delusional and paranoid, although he goes on to receive a Nobel Laureate in Economics.  A leitmotif of these films and Proof is the close association of mathematical genius and some form of mental illness.

Proof  is about such a mathematical genius who suffers from mental illness, the recently deceased Robert, who appears in the play in flashbacks, and in an opening scene fantasy conversation with his daughter Catherine who cared for him during his declining years.  She seems to be following in her father's footsteps, having mathematical abilities, and suffering from depression.  The play looks at that fine line between genius and mental illness, Catherine's fear of inheriting both, while exploring the subjects of love and trust, the latter themes being the real "proof" of the play.

So, what does Dramaworks bring to the table that the other well-worn productions of Proof might have overlooked?  Above all, Dramaworks focuses on the play's deep emotional core, with the characters interacting as finely as a string quartet, the story simply unfolding their fears and suspicions, their hopes and their love.

In addition to Catherine and her father Robert, there is Catherine's sister, Claire, the one person who represents the real world vs. the exalted world of theoretical mathematics. Then there is Hal, a PhD who studied under his mentor, Robert, who thinks he finds a mathematical breakthrough in what he thinks is Robert's papers, but Catherine claims it's authorship.  She also studied math (and perhaps inherited genius) and the question of authorship is the fulcrum of the dramatic tension between and Catherine and Hal, and Catherine and her sister.  Hal and Catherine have also become lovers, complicating this issue further.

Between the four characters Director Bill Hayes wrings out every drop of meaning intended by Auburn's play, letting the four fine actors find their unique voices in this production.  (I judge emotional depths of a play by the number of tissues Ann needs to get through the production and I noted several being brought to her eyes from her pocketbook.) Hayes also exacts the comedic elements from the play and there are some very funny moments, well pared to some of its darker facets.  The pacing of the play is lively too and I would not be surprised if the drama unfolds more quickly in this production than some others, a factor that keeps the audience on the edge of their seats.

Kenneth Kay's Robert is measured in his "madness" (but not in his love for his daughters), until he volcanically explodes not accepting, or understanding, his final decline in the cold outside his home on the back porch of an old Chicago neighborhood where he and Catherine live. He has been laboring over equations relating to temperatures and seasons, all gibberish, which Catherine is shocked to discover after his short remission during which she left home to study at Northwestern University.  She leads him back into the house and back into her role of caretaker to his death. Kay plays his part perfectly, and you can't help but see in him the decline we all fear or have witnessed in our own families.

The most demanding role is Catherine's played by Katherine Michelle Tanner.  She alternates between being strong, as in her contention that the authorship of "proof" is her own, cynical in some aspects of her relationship to her sister, Claire, and fragile and vulnerable as she reacts to Hal and her father.  She looks disheveled in most of the play, wearing her inner demeanor on her sleeve. Tanner's performance is compelling and as she is almost nearly always on stage one's eyes are drawn to her and her conflicts.

If Catherine has a demanding role, perhaps Claire's is most difficult.  Claire has flown back from New York City to her old childhood home for her father's funeral in which she thinks to rescue her sister and walks into a drama she never expected.  ("People like me have to clear up catastrophes" she proclaims at one point.) Hers is the voice of reason, a woman who really loves her sister and father, trying to do "the right thing" but she always seems to become the heavy, in spite of one comic moment joining in a late night party after her father's funeral with geeks from the University, getting drunk and waking with a hangover the next morning, complaining, "those fucking physicists!"  You find yourself feeling for her, imagining if you were in a similar position, but she just doesn't understand the weightiness of theoretical mathematics, the implications of a "new proof" or the emotional ramifications of doubting her sister's authorship.  Ironically, Claire is played by an actor from New York City, Sarah Grace Wilson, joining three regional actors. But she is no stranger to Dramaworks, having appeared in last year's production of Dinner With Friends.

Cliff Burgess is becoming a fixture at Dramaworks, this time playing the nerdish Hal, protégé and admirer of Robert, and who becomes the lover and ultimately the advocate of Catherine.  Burgess plays this role to the tee, exacting laughs referring to his band:

Hal: They're all in the math department, they're really good. They have this song called 'i', you'd like it. Like lower-cased i. They just stand there and don't play anything for three minutes.
Catherine: Imaginary number.
Hal: It's a math joke... You see why they're way down on the bill.
Catherine: That's a long way to drive to see some nerds in a band.
Hal: You know, I hate when people say that. It's not really that long of a drive.
Catherine: So, they are nerds.
Hal: Oh, they're raging geeks. But they're geeks who, you know, can dress themselves and hold down a job at a major university. Some of them have switched from glasses to contacts. They, uh, play sports, they play in a band, they get laid surprisingly often... So, it makes you kinda question the whole set of terms. Geek, nerd, wonk, Dilbert, paste eater...
Catherine: You're in this band, aren't you.
Hal: Ok, yes. I play the drums. You wanna come? I never sing, I swear to God 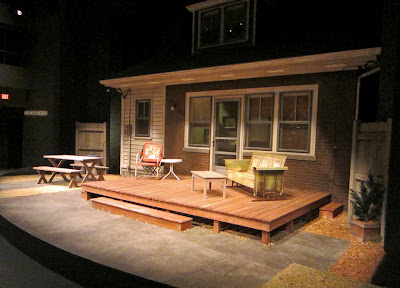 I can't say enough about the new home of Dramaworks, The Don and Ann Brown Theatre on Clematis Street in West Palm Beach, and the new freedom that the design team, headed by Michael Amico now has to create scenic design that is world class.  Perhaps it was because we were seated in the front row for this performance that made us feel like, indeed, we were in the backyard of a Chicago home in an old neighborhood, a home that is obviously in some state of decline as is Robert. It is Catherine and Claire's childhood home as well. How often have we visited our own childhood homes to be buffeted by the ensuing emotions of such a visit?  That is the feeling one gets from the set design, the lighting, even the music interludes between scenes.

And to say Dramaworks "has arrived" is an understatement.  Unlike some other regional theaters that have gone by the wayside in this hostile economic environment for the arts, Dramaworks has been building, step by step, never overreaching itself, into one of the leading regional theaters in the US.  We're just lucky enough to live nearby.