Sometimes you come across a point of view on our economic crisis that provides such clarity you want to share it. Such is the case with David Einhorn’s recent speech at the Helbrunn Center for Graham & Dodd Investing. Einhorn is President and founder of Greenlight Capital, a money management firm that specializes in long-short value oriented investments, and he is the author of Fooling Some of the People All of the Time, the story of Greenlight’s short sales of Allied Capital and the subsequent controversy that became highly publicized. I learned of this speech from a blogger colleague over at Fund My Mutual Fund but undoubtedly it has been widely circulated by others as well.

I have selected some salient points from the speech and post them here. If you read these, go to the entire speech, as quotes out of context cannot convey the full measure of Einhorn’s well-reasoned arguments. While his value oriented investing style will remain his approach, the current crisis has convinced him to include gold in his portfolio, something most value investors find antithetical.

I wonder what he thinks about the rise of the Dow to more than 10,000, a sixty percent “recovery” from its earlier lows. Late last year I had posted a summary of the Wall Street Journal’s headlines all of which were decidedly negative, the perfect contrarian indicator. Now, the market is being bid up with talk of green shoots and improving earnings. An anecdotal observation regarding the latter is the recently announced “improved” earnings (that is, a positive comparison to expected earnings, not normalized ones) of many of the Dow’s major components seem to be accompanied by a shortfall in revenue, in other words earnings that come as a result of cost cutting, particularly layoffs and hiring freezes. Corporations cannot sustain earnings growth without revenue growth and the latter cannot happen while real unemployment rates stubbornly remain in double digits leaving the consumer on the ropes.

The illogical exuberance of the market lately is in lock step with the dollar’s decline as interest rates have also disappeared into a black hole. Stocks have just become another commodity, with a more limited supply than the government’s ability to manufacture dollars. As the headlines of almost a year ago signaled a bottom, perhaps the recent introduction of the Porsche Panamera, a $133,000 four door sedan with a 500 horsepower twin turbo V8 that can reach 60 mph in a mere 4 seconds – the perfect car for the bailed-out gang on Wall Street in this energy-challenged age – foreshadows a new bubble.

Here are some salient points from David Einhorn’s speech (Value Investing Congress David Einhorn, Greenlight Capital, “Liquor before Beer… In the Clear” October 19, 2009) which should be read in its entirety here:
* As I see it, there are two basic problems in how we have designed our government. The first is that officials favor policies with short-term impact over those in our long-term interest because they need to be popular while they are in office and they want to be reelected. …. Paul Volcker was an unusual public official because he was willing to make unpopular decisions in the early ’80s and was disliked at the time. History, though, judges him kindly for the era of prosperity that followed. Presently, Ben Bernanke and Tim Geithner have become the quintessential short-term decision makers. They explicitly “do whatever it takes” to “solve one problem at a time” and deal with the unintended consequences later.

* The second weakness in our government is “concentrated benefit versus diffuse harm” also known as the problem of special interests. Decision makers help small groups who care about narrow issues and whose “special interests” invest substantial resources to be better heard through lobbying, public relations and campaign support…. [A]t some level, Americans understand that the Washington-Wall Street relationship has rewarded the least deserving people and institutions at the expense of the prudent. They don’t know the particulars or how to argue against the “without banks, we have no economy” demagogues. So, they fight healthcare reform, where they have enough personal experience to equip them to argue with Congressmen at town hall meetings. As I see it, the revolt over healthcare isn’t really about healthcare, but represents a broader upset at Washington.

* The financial reform on the table is analogous to our response to airline terrorism by frisking grandma and taking away everyone’s shampoo, in that it gives the appearance of officially “doing something” and adds to our bureaucracy without really making anything safer. With the ensuing government bailout, we have now institutionalized the idea of too big-to-fail and insulated investors from risk. The proper way to deal with too-big-to-fail, or too inter-connected to fail, is to make sure that no institution is too big or inter-connected to fail. The test ought to be that no institution should ever be of individual importance such that if we were faced with its demise the government would be forced to intervene. The real solution is to break up anything that fails that test.

(As a follow up to this last point, see today’s New York Times article: “Volcker’s Voice Fails to Sell a Bank Strategy: The former Fed chief said the giant banks must be broken apart and separated from risky trading on Wall Street, a view not shared by many in the White House”)
* Rather than deal with these simple problems with simple, obvious solutions, the official reform plans are complicated, convoluted and designed to only have the veneer of reform while mostly serving the special interests. The complications serve to reduce transparency, preventing the public at large from really seeing the overwhelming influence of the banks in shaping the new regulation. In dealing with the continued weak economy, our leaders are so determined not to repeat the perceived mistakes of the 1930s that they are risking policies with possibly far worse consequences designed by the same people at the Fed who ran policy with the short term view that asset bubbles don’t matter because the fallout can be managed after they pop.

* Over the next decade the welfare states will come to face severe demographic problems. Baby Boomers have driven the U.S. economy since they were born. It is no coincidence that we experienced an economic boom between 1980 and 2000, as the Boomers reached their peak productive years. The Boomers are now reaching retirement. The Social Security and Medicare commitments to them are astronomical. When the government calculates its debt and deficit it does so on a cash basis. This means that deficit accounting does not take into account the cost of future promises until the money goes out the door.

* [T]he Federal Reserve is propping up the bond market, buying long-dated assets with printed money. It cannot turn around and sell what it has just bought. ….Further, the Federal Open Market Committee members may not recognize inflation when they see it, as looking at inflation solely through the prices of goods and services, while ignoring asset inflation, can lead to a repeat of the last policy error of holding rates too low for too long.

* I subscribed to Warren Buffett’s old criticism that gold just sits there with no yield and viewed gold’s long-term value as difficult to assess. However, the recent crisis has changed my view. The question can be flipped: how does one know what the dollar is worth given that dollars can be created out of thin air or dropped from helicopters? Just because something hasn’t happened, doesn’t mean it won’t. Yes, we should continue to buy stocks in great companies, but there is room for [another] view as well. I have seen many people debate whether gold is a bet on inflation or deflation. As I see it, it is neither. Gold does well when monetary and fiscal policies are poor and does poorly when they appear sensible. Gold did very well during the Great Depression when FDR debased the currency. It did well again in the money printing 1970s, but collapsed in response to Paul Volcker’s austerity. It ultimately made a bottom around 2001 when the excitement about our future budget surpluses peaked. Prospectively, gold should do fine unless our leaders implement much greater fiscal and monetary restraint than appears likely. Of course, gold should do very well if there is a sovereign debt default or currency crisis.

* For years, the discussion has been that our deficit spending will pass the costs onto “our grandchildren.” I believe that this is no longer the case and that the consequences will be seen during the lifetime of the leaders who have pursued short-term popularity over our solvency.

On the lighter side of things, here is something I caught at Westport Now, the online newspaper that covers Westport, Connecticut, where I worked for so many years. Our first office was built on the site of an old New England lumber yard, on the Saugatuck River at 51 Riverside Avenue, and I recognized the building, the one on the left, in Westport Now’s recent photograph, the same fall colors ablaze as I remember them nearly forty years ago… 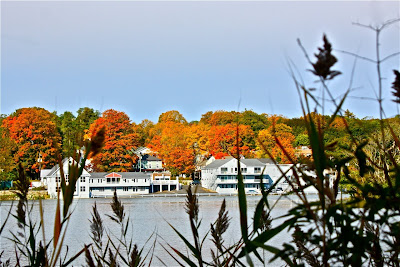