Build it and they will come. But how? It took my first visit to the new Yankee Stadium in the Bronx to clearly see the growing disparity between the haves and the have-nots. We can build a stadium while our infrastructure is allowed to crumble.

My son, Jon, and I had been talking about going 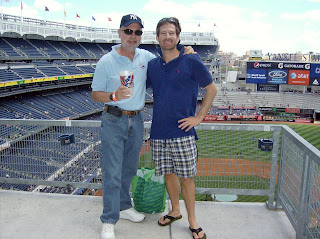 to the new stadium for some time, my having taken him to his first Yankee game at the old stadium. And when I used to go there decades before as a boy, I sat in the bleachers – 50 cents a seat. In those days my Yankee heroes, Mantle, Rizzuto, Berra, Ford, etc. made salaries that hardly approached six figures.

When we went to games with our sons in the 1980’s, occasionally we would go to the Stadium Club before the game and one time Bill White and Phil Rizzuto (after they became announcers for the Yankees) were having dinner at the next table. Phil was joking with Bill, calling him a huckleberry, when he asked the fellow diners whether anyone had some aspirin. My wife 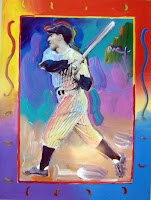 produced her handy pill box and offered Phil a couple so we talked for a while with him – my father graduated from the same high school as Phil and in about the same year. I wonder whether today’s players would be as friendly now that they are paid the same as elite entertainers.

The trip to the stadium on the New Haven railroad, changing at 125th street for a short express to Yankee Stadium at 153rd street, underscored the new two-world order, the trains the same ones I rode on to Grand Central some 30 years ago, on tracks that were built long before that, the air conditioning barely working, the transportation infrastructure hanging threadbare. The return trip was even worse, typical delays, waiting at 125th Street station, and making a connection that was so packed the standing room only did not even provide a space for putting down one’s bag. Amazingly, everyone just seemed resigned to

this reality, along with the extreme shuddering of the train because of the poorly maintained track bed, conditions that would not be tolerated in most other advanced countries. Perhaps not coincidentally, the day we went to the stadium there was a major water main break in the Bronx, 100 year old pipes bursting and creating a river in the streets. Maybe we can get another 50 years out of them?

While the funds or motivation for rebuilding our infrastructure seem to be lacking, that does not 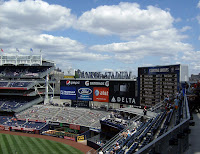 apply to tearing down the old Yankee Stadium to rebuild one with Disney-like features. Good seats are now all corporate owned at astronomical prices and as an individual you can bid on those that are posted on such sites as StubHub, but with after tax dollars while corporate holders buy them as a deductible corporate expense. Why bother closing such tax loopholes that subsidizes professional sports?

The prices for food and drink are commensurately expensive, a cup of $12 beer or an $8 hot dog. A Yankee cap is a mere $27. Perhaps that is what is meant by trickle-down economics –corporations buy tax-deductible seats at preposterous prices, that revenue (with those from broadcasting) shifting to MLB owners and players, and then trickling down to those people employed at the ball park to move hugely inflated priced merchandise and food to the masses. Everyone wins! 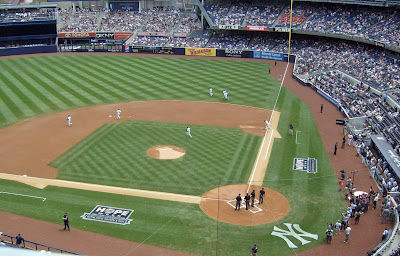 But if one can look past those economic realities, there is the intrinsic beauty of the ball field, a near facsimile of the old stadium and its rich history, and that certain feeling when, after the national anthem, “play ball!” settles in one’s mind, harking back to a time of innocence. It is nice to remember, and to share the day with my son, but sad as a society we have become so divided, with no clear vision of economic priorities.
Posted by Bob at 8:35 AM