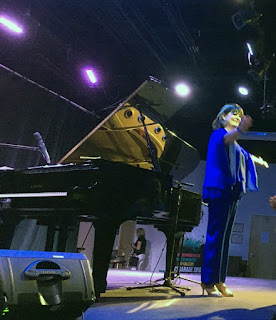 A couple of months ago our friends Karen and Bob suggested we join them at Del Ray’s Arts Garage where Ann Hampton Callaway was performing.  As much as I love the Great American Songbook, memories of a parking nightmare in Delray made me hesitant to go.  That experience is a story onto itself, not worth going into here.  Easy, they said, we’ll drive and park, so we said you’re on.

The indoor parking garage was full to the third level but there Bob found a space.  No doubt, I thought, if I drove, it wouldn’t be there and I’d end up driving around in circles as I did one evening in Delray (ok, I said I wouldn’t go into it, but the memory lingers on).

The Arts Garage performance venue has been configured into a cabaret, six to a table, bring your own food and drink.  Karen supplied a delicious cream and fruit tart for dessert and Ann brought the wine (coffee for me).

My seat was ideal (thanks Karen!); with a full view of the piano, a Kawai Grand.  You rarely see a Kawai being used professionally, the instrument of choice usually being a Steinway or a Yamaha.  I have a Yamaha baby grand which I love, but I almost bought a Kawai as I think it has a brighter sound, so ideally suited for playing The Great American Songbook.

As I said, we were seated at a table for six and our two other tablemates turned out to be a man who we used to watch on NYC TV years ago, Bill Boggs, who had an interview show with some of the entertainment greats, and to this day does a professional speaking tour discussing those people, so watching the Diva perform with Bill and his partner, Jane was serendipitous.  This is how I remember him way back when we were in NYC, a photo of him interviewing Chuck Berry.

We’ve seen other great Divas in a cabaret setting before, and three special ones spring to mind, including a rare US appearance at the Colony by perhaps the greatest living female jazz singer, Stacey Kent.

Unfortunately, it was at a time before I had a smart phone and did not have a camera on me, but seeing her and meeting her was a thrill.  She’s been called the “Frank Sinatra” of divas, because of her unique way of phrasing a song.  Her husband backs her up on the sax but does not overwhelm her.  If she ever returns to Florida or to NYC while we are in that area, we will be there.

We also saw another fabulous Diva at the Colony, Jane Monheit, who has a distinctive style and great range with her voice.  She too performs with a back up group headed by her husband on drums.

When we lived in New York we were lucky enough to go over to a small Supper Club on the Upper East Side and there we sat right at a front table, mesmerized by the jazz legend, the late, great Carmen McCrea.  I think I have all her CDs.  Jazz doesn’t get any better than that.  She too was backed by a combo she probably worked with for years.

Of course we’ve seen other singers, Keely Smith at the Colony once, but usually on stage in an auditorium, as we once saw Ann Hampton Callaway at the Eissey Campus Theatre of Palm Beach State College many years ago.  She was accompanist by, arguably, the most original jazz pianist today, Bill Mays.  There is a world of difference, however, between a stage performance and cabaret.

The obvious difference is the intimacy created, resulting in the give and take between the performer and the audience.  One feeds on the other.  You get the sense that we’re all part of the Great American Songbook “family.”  And it is a family that loves its progenitors, the composers, the lyricists, the performers who have stylized this great body of music.

Ann Hampton Callaway preserves and has become part of this wonderful tradition in her program “Jazz Goes to the Movies.”  Her program fully realizes the breadth of the great songs which emerged from film.  In addition to the obvious ones, there are endless streams of classics that have come from lesser watched films, such as "This Time the Dream's on Me" by Harold Arlen, and lyrics by Johnny Mercer for the 1941 film “Blues in the Night,” just one of the many songs sung by Callaway during her two part performance.

Her song selection was broad.  I wrote them all down, but I’ll only mention a few of the 18 (yes, 18!) songs she sang.  Naturally, I’m going to focus on some I love to play on the piano myself.

This has to be at the top of the list, the not often performed song by Henry Mancini with lyrics by Leslie Bricusse, “Two for the Road.”  Undoubtedly she chose to perform this wonderful song, I think Mancini’s best, because the co star of the film of the same title, the actor so many of us watched “grow up” on film from his first performance in “Tom Jones,” Albert Finney had just passed away.  This is the same song which Ann (my Ann) and I chose to “perform” at our son’s wedding last August, me at the piano and Ann reading (as, unfortunately, my Ann can’t sing – and neither can I) the evocative lyrics, so appropriate for Jonathan and his bride, Tracie.

We hung onto every word as Callaway lovingly performed this number.

I interject an important observation here regarding her performance, unique among the cabaret divas I mentioned above, and that is she accompanied herself on the piano.  I mentioned above the Kawai piano.  I guess I simply expected a pianist and a bass player to come out to accompany her.  Oh, it is so, so much better when a great singer and pianist are one.  Her piano chops may not be in the league of a Bill Mays, but in accompanying herself, she is able to ring out every drop of emotion from The Great American Songbook.  It’s as if her piano and voice are but one instrument, in perfect harmony and symmetry.

Her opening number, “From this Moment On” demonstrated her remarkable range, her smoky voice, and her ability to scat.  During another number, again one of the strengths of a cabaret setting, was taking the audience through a scat lesson and we found ourselves scatting along with her.  Really fun stuff.

Another diversion, about a third of the way through her program, she finally noticed a man in a front table and she was somewhat startled, saying, “Oh, my ex husband is here!”  Well, that got the audience’s attention, and from that point on, there were some very funny, but harmless jabs sent his way by Callaway.  She knows how to work an audience, including giving attribution to our table mate, Bill Boggs.

She incorporates all styles in her piano accompaniment, from a bluesy feeling playing and singing “As Time Goes By” and some bouncing boogie-woogie in her tribute to Fred Astaire (she knows his sister) in “Let’s Face the Music and Dance.”

Her jazz sensibility on the piano came out in “This Can’t be Love,” again demonstrating her incredible voice range.

One of my favorites when I play the piano is “Folks Who Live on the Hill,” by Jerome Kern, and lyrics by Oscar Hammerstein II from the 1937 film “High, Wide, and Handsome.”  But, oh, my heart be still listening to Callaway play and sing this song, channeling Peggy Lee with whom the song is closely associated. 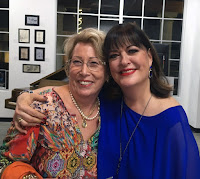 Her rendition of “At Last” Etta James's signature song but more recently Beyoncé Knowles’ “big song” demonstrated the power of Callaway’s voice.  Rarely does a singer have the gift of the subtle and power as well.  It was breathtaking.

Callaway is not only a performer, but a composer as well, and those skills were put on full display in a playful impromptu performance she composed and sung on the spot taking silly suggestions from the audience; a blind man, a pizza maker, meets a woman who makes burrata, they make love on the beach in Del Ray in a one night stand, where they lose their clothes while swimming, the details not being important other than her ability to compose in real time.  She also jokingly “tuned” her voice to the piano, easily singing a half step below or above a note to display her voice control and musical sensibilities.

At one point, she gave a “diva blessing” to the audience.  In sum, it was an exhilarating night.  There is nothing in the world like the joy from hearing the Great American Songbook, performed by a woman completely in command of her musical gifts.  In fact, her warm personality, eager to be with her audience in every way, happy to greet them on the way out, made it a perfect evening of “being with family.”  Thanks to our friends, Karen and Bob, for bringing us to see Ann and to all those who continue to perpetuate The Great American Songbook, performers and audiences alike. We are all truly blessed! 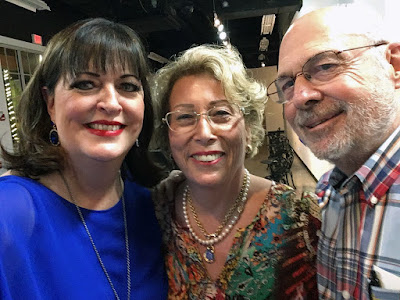