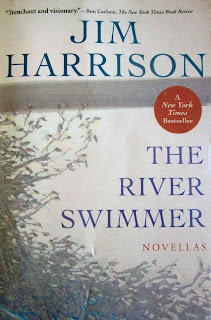 Jim Harrison produced an extensive number of novels, novellas, poetry, and screenplays, yet I had never read his work (other than seeing his screenplay version of Legends of the Fall, perhaps his most famous novella).  When I saw his obituary earlier this year I made a mental note to remedy this.  Just this short eulogy by his best friend,Thomas McGuane (whose recently published short story collection Crow Fair is a treasure) says it all about the kind of writer and person Harrison was.

I chose to read one of his more recent works, The River Swimmer, which is the title of one of the two novellas therein, the other being The Land of Unlikeness.  I forgot what a joy it is to read a novella, which can be read in one sitting (but in my case taking my time, savoring the language, the perfect literature to read at bedtime, being able to expunge the real world and take in the rural north of Harrison’s world).  These two works are about two men, one young, one old, each on a journey to find his true self.

The Land of Unlikeness especially resonates as it is about a man much closer to my age who is going through a late life identity crisis.  Clive was an artist who became a renowned art appraiser and as such traveled throughout Europe on behalf of his clients, leaving far, far behind the farm on which he was raised in Michigan.  There, his mother lives with his sister.  Suddenly he finds himself obligated to return home for a summer, when his sister wants to see Europe for the first time and expects her brother to step into a caretaking role for the mother.  He does so reluctantly, finding himself back in his boyhood room.  And then things change.

His first love, Laurette, now owns the old stone farmhouse of her parents, visits there on weekends, her “housesitter” or “whatever” Lydia living there as well.  It brings back memories of Clive’s nearly consummated sexual encounter with her as a teenager.  But it also brought to surface the truth about his life: “He was suddenly quite tired of the mythology he had constructed for his life.  The idea of having quit painting was far too neat.  He had lost heart, run out his string, or the homely idea he had painted himself into a small dark corner.”

Meanwhile, he had his mother to care for and all she wants to do is to be taken out for bird-watching expeditions early in the morning.  “The dawn was loud with the admittedly pleasant chatter of birds.”  These expeditions, although obligatory, become pleasurable.  More things change.  Laurette and Lydia come to visit the mother as they have been neighbors for a long time.  Clive awakens from a nap and observes the women on the patio and goes downstairs to join them and have a martini.  “Even more prepossessing was a casserole of lasagna she had brought over which was on a table beside an empty wine bottle.  The smell of garlic and tomato sauce, Lydia’s thighs, and the sunlight dappling through the willow tree overwhelmed him and he drank deeply.”

He and Laurette wander to the back of the garage nearby.  “He found himself pressing her against the hood of his mother’s car, trying to kiss her but she averted her face.  His hands kneaded her buttocks and he was becoming hard at an amazing speed.  ‘Jesus Christ, I have to think about this.  I can’t fuck you in a garage with people outside.’  She slipped away laughing.  ‘Why’ he said glumly.  He stood there waiting for his penis to slump.  It seemed comic at best that this woman could still bowl him over after forty years.  How wonderful it would be to find a ’47 Plymouth and paint her slouched in the corner with her pleated skirt up.”

Just superb erotic imagery as Clive works towards that wishful goal of finally consummating their teenage relationship while still caring for his mother.  Then he finds himself painting once again.  In fact, “on a warmhearted whim he did a small portrait of a bluebird for his mother and then was embarrassed when she was overwhelmed.”  It is at this point that I totally identified with Clive, his love of painting is akin to my love of writing, but to say I’m a writer, or that I’m a pianist, my other great interest, is to endow an obligation and subjects the passion to categorization: “Now he was speculating whether or not Laurette would pose half-nude on the car seat.  The whole idea was preposterously silly but why not?  It was not more cheeky than the idea of his resuming painting.  Part of the grace of losing self-importance was the simple question ‘Who cares?’  More importantly, he didn’t want to be a painter, he only wanted to paint, two utterly different impulses.  He had known many writers and painters who apparently disliked writing and painting but just wanted to be writers and painters.  They were what Buckminster Fuller might have called ‘low-energy constructs.’  Clive didn’t want to be anything any longer that called for a title.  He knew he wanted to paint so why not paint.  Everybody had to do something while awake.”  A priceless paragraph of writing and wisdom.

A subplot in the novella is his being estranged from his daughter Sabrina and their eventual reconciliation, all part of his becoming himself, they sharing a camping trip to Marquette on Lake Superior.  But it was stormy and that first night they had to take a hotel room on the lake.  Finally, they were able to camp.  “Behind Sabrina there was a shade of green on a moss-colored log he had never seen before.  And on that first afternoon in Marquette there had been a splotch of sunlight far out on the dark stormy lake, golden light and furling white wave crests.”  In nature Harrison finds his halcyon home and his most beautiful writing is centered there.

Nature figures even more prominently in The River Swimmer, the second story in the book.  Here Harrison moves into the realm of magical realism.  Thad is a young man who wants to swim all the rivers of the world.  Cheever’s The Swimmer merely swims the suburban sins of Westchester.  Thad wants to take in all of nature and in fact has a mystical relationship with “water babies” which his American Indian mentor, Tooth, called them.  She was born on the same land as Thad and was allowed to stay there when Thad’s father bought the land.  Tooth says they may be the souls of lost children who became aquatic infants.  These apparitions frequently accompany Thad on his journeys but the demands of two young women conflict him, Laurie and Emily.  “Thad felt a slight wave of nausea over money and power, including Laurie and Emily.  Nothing ever seemed to be denied to rich girls….What kind of preparation for life can wealth be except to make it easy?  Thad preferred Tooth’s niece, Dove, in many ways….They had such a good time his heart broke apart when they split up and she said, ‘You like those rich pretty cunts not a big-nosed Chip girl.’

As in any piece of magical realism, one has to suspend belief to get the most out of the tale.  Thad endures criticism, even violence, in his pursuit of his aquatic life.  “In periods of extreme loneliness we don’t know a thing about life and death and the reality of water consoles us.  In school he had long thought that history, the study of it, was an instrument of terror.  Reading about either the American Indians or slaves can make you physically ill.  He wanted a life as free as possible from other people, thus simply staying on the island was tempting.  The possibility of stopping people from doing what they do to other people seemed out of the question.”

He makes compromises towards the end, but one in keeping with “the idea that he was a whore for swimming, the only activity that gave him total pleasure and a sense of absolutely belonging on Earth, especially swimming in rivers with the current carrying your water-enveloped body along at its own speed.  It was bliss to him so why shouldn’t he be obsessed?”

As painting was an obsession to his older version, Clive. They both found solace in nature, doing what they were born to do.

Jim Harrison, a unique writer, who died while writing long handed at his desk. 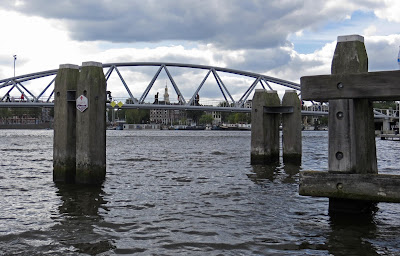