A Surprise Discovery About the 1913 Avant-garde Armory Art Show 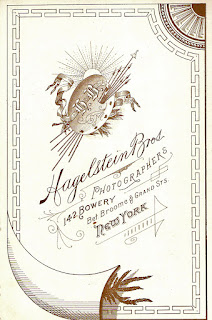 I knew that the family business, established in 1866, had progressed from portraiture photography to commercial photography until they finally closed some 120 years later, and I was vaguely aware that they once also specialized in photographic reproductions of paintings, hand coloring the prints, but I did not know that my grandfather, Harry, went on such assignments, indeed, this particularly important one. 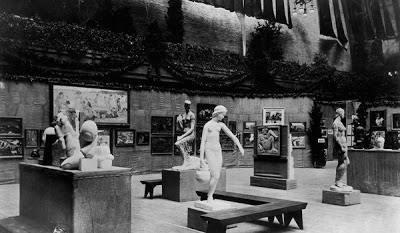 A recent issue of the Wall Street Journal reported that while the Armory Show "was widely panned" it nonetheless"sparked a new era" --The show lasted a scant four weeks, but Manhattan went on to become the Florence of modernism. The Museum of Modern Art, founded in 1929, became the first cultural institution in the Western Hemisphere ever to outclass comparable institutions in Europe. New York became the natural home of glass-box Bauhaus modernism at its best and worst (a style that is now re-emerging with new panache). And it became the home of Abstract Expressionism, of de Kooning, Rothko and Pollock—of the ultimate, transcendent achievement of abstract art....It all started at the Armory.

A more detailed account is in the New Criterion, The Armory Show at 100; The lessons of the 1913 International Exhibition of Modern Art

I've written about the family's photography business before, but there may be more curiosity concerning Hagelstein Brothers when the New York Historical Society "The Armory Show at 100" opens in October.

My beloved Uncle Philip was the family historian and regrettably I never had the opportunity to record all of his incredible family and business knowledge before he died.  He and my father (who was known by his middle name, Robert, and not his given one, Harry) were the last Hagelstein brothers to run the business.  I had chosen to go into publishing. 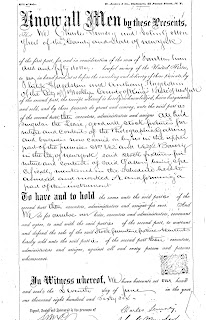 Uncle Phil had given me some documents and from those I pieced together that my great-grandmother was from the Hamburg, Germany area but most of my family came from Cologne.  Four brothers, Anthony, Carl, Philip, and William came to America between 1853 and 1856.  Philip and Anthony bought a photography business in 1866 at 142 Bowery in New York City and although the two other brothers may had been involved on and off, Philip apparently was the main driving force. (William was drafted into the Union Army and he survived the war, settling in Brooklyn and went into the metal fabrication business. Carl went to California to make his fortune but came back after the war).

My grandfather, Harry, entered the business around 1905 and about 1915 he moved the business from the Bowery to 100 Fifth Avenue where it flourished (completing its transition to a commercial photographic firm from portraiture which it specialized in during the Bowery years) through the depression and two major wars.

His sons, my father and my Uncle Philip, ran the business after WW II until the late 1980's at which time it was liquidated.  It was moved to Long Island City from 100 5th Avenue just before my father's death in 1984.

I have lamented the fact that the records of Hagelstein Brothers and, more importantly, hundreds and hundreds of Daguerreotypes and prints were destroyed in the early 1990's when my Uncle Philip's home (where they were stored) had to be sold and he went into a nursing home suffering from dementia..  We had sought to donate them but there was no interest at the time either from libraries or museums.  There was just no place to store them. Today, they would have all been digitized.

As an interesting family history aside, my father, who as I mentioned previously used the name, Robert,( my first name), purportedly was named after Anthony's son Robert, who became a well known Botanist. 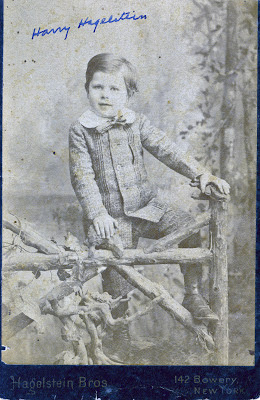 Coincidentally, at about the time I learned of the Armory assignment, out of the blue I received an email from another reader, Tom Luzzi, who had come across my blog after searching for information on Hagelstein Brothers as he had some photographs from their studio -- including ones of my grandfather and his sister -- and asked whether I would like to have them, explaining, my mother, who is 93, said the pictures came from her Aunt when they lived in Brooklyn in the early 1900's.  Her Aunt was best friends with a Kate Hagelstein (Harry's sister), who later became Kate McClelland.  The photos are from the Hagelstein studio and are of a Harry Hagelstein as a child while another photo shows Harry and Kate. 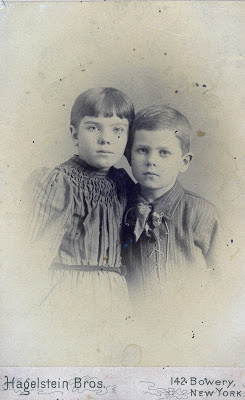 Then he said he had several more, some which might be of the family, so he went to the considerable time and effort to scan and send them all.  This thoughtful, and generous act on his part allows me to incorporate his photographs as well as the few that I have from the Hagelstein Brothers Photography studio when it was in the Bowery and they are interspersed throughout this entry or appended at the end. 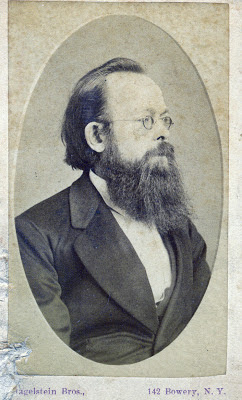 Remarkably, he produced the only photograph I have ever seen on the co-founder of the studio, my great grandfather, Philip. I am profoundly grateful to Tom for making the effort to contact me and then  to scan and email the photographs he had from his mother.

Nonetheless, most of the studio's photographs have been lost to time.  But I was delighted to learn about the studio's work on the Armory exhibit and hope that anyone looking for information on Hagelstein Brothers Photographers will find this summary helpful. Below is the beginning and conclusion of a long article that appeared in the February and March 1942 issues of The Commercial Photographer.  It was about the firm and its innovative work in commercial photography.  (Unfortunately, Blogger does not support PDFs so I can not include it in its entirety, but anyone doing research on the studio can contact me at lacunaemusing@gmail.com and I will send a PDF.)

"SALES Powered Photography"-this phrase which appears in the telephone Red Book advertising of Hagelstein Brothers, 100 Fifth Avenue; New York City, aptly suggests the firm's outstanding accomplishment in the field of merchandising. H. P. Hagelstein has developed an organization which is expert in dramatizing furniture, pianos, radio cabinets, lamps, china, glass, silverware, and other merchandise for the manufacturer who uses photography to sell his product to the wholesale or retail dealer. Associated with him in the management of the business
are his sons Philip and Robert.

This firm was founded by Philip Hagelstein, father of the present owners, and his brothers in 1866. In his studio, on the Bowery, he originally specialized in fine Daguerreotypes and portraits made on wet plates, working with the limited materials available at that time. Examples of his Daguerreotypes dating from 1860 to 1870 were included in the Eastman Kodak exhibit during the recent New York World's Fair. About 1880 he began to pioneer in commercial work for manufacturers in the conservative fashion of the time, and as his sons entered the business this specialty was further developed. Not until 1900, however, was portrait work entirely discontinued and attention focused on two special fields, one dealing with the manufacturer's merchandising needs, the other consisting of reproductions of paintings for artists and publishers.

When this latter specialty was a very important phase of the business, direct negatives from llx14 to 24x30 were made, and reproductions in black-and-white, sepia, and hand colored prints on platinum paper were sold to publishers and art dealers. These were discontinued due to the entry of mechanical printing processes, such as photogravure, photogelatine and color printing. But Hagelstein Brothers still have in their files examples of the exquisite reproductions of noted paintings which were done on platinum papers. And today they still photograph paintings for portrait artists, murals, and frequently sculpture.

Harry P. Hagelstein, who now directs sales contacts and planning, is as creatively minded in adapting photography to effective merchandising as in the technical aspects of camera work. That's an important reason why many customers have been buying photography from this concern for years-one firm, in fact, has been on the books since 1878 when Philip Hagelstein began to be interested in the relation of merchandise and photography.......

The firm's very best advertising, it is safe to say, is to be found in its adherence to the extremely high standards that Philip Hagelstein set for himself when photograph was very young and adventurous in 1866.  The profession has grown considerably older, but reliability and craftsmanship are still "better coin than money"....At any rate, Hagelstein Brothers have built on them for 75 years -- and will continue so in the future. 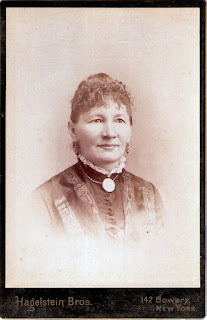 And they did for nearly fifty years more until advertising shifted from producing photographs for salesmen's catalogs to other media, magazines, radio, and television. 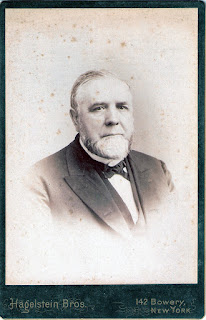 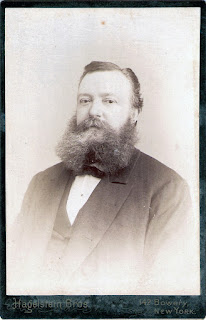 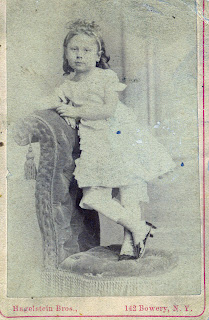 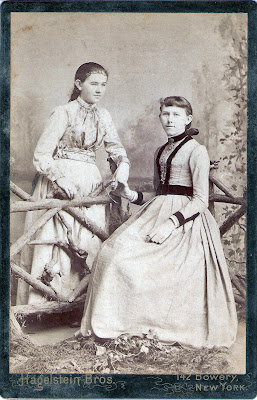 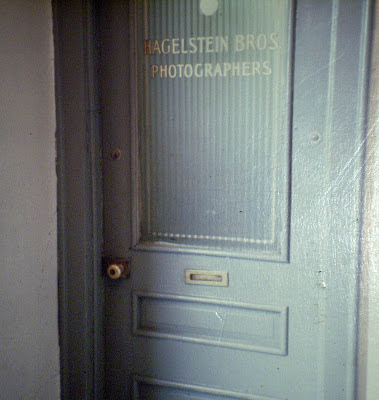 One of the nice things writing this blog is occasionally hearing from readers whose lives have been touched in similar ways.  This is a postscript to this particular entry, received two years after I wrote it.  I’m including the email here by permission of the writer, Frank Fink, as well as the photograph he sent of his grandfather, taken by my great-grandfather in 1889.  As I said in the entry, most of the precious glass plates and prints from Hagelstein Brothers were destroyed after my Uncle’s death, although I had tried to place them with a museum.  This was before the age of digitization.  It would have been a very different outcome if it happened today.  Still, I’m always on the lookout for prints from Hagelstein Brothers, and it was thoughtful of Frank Fink to forward this image. 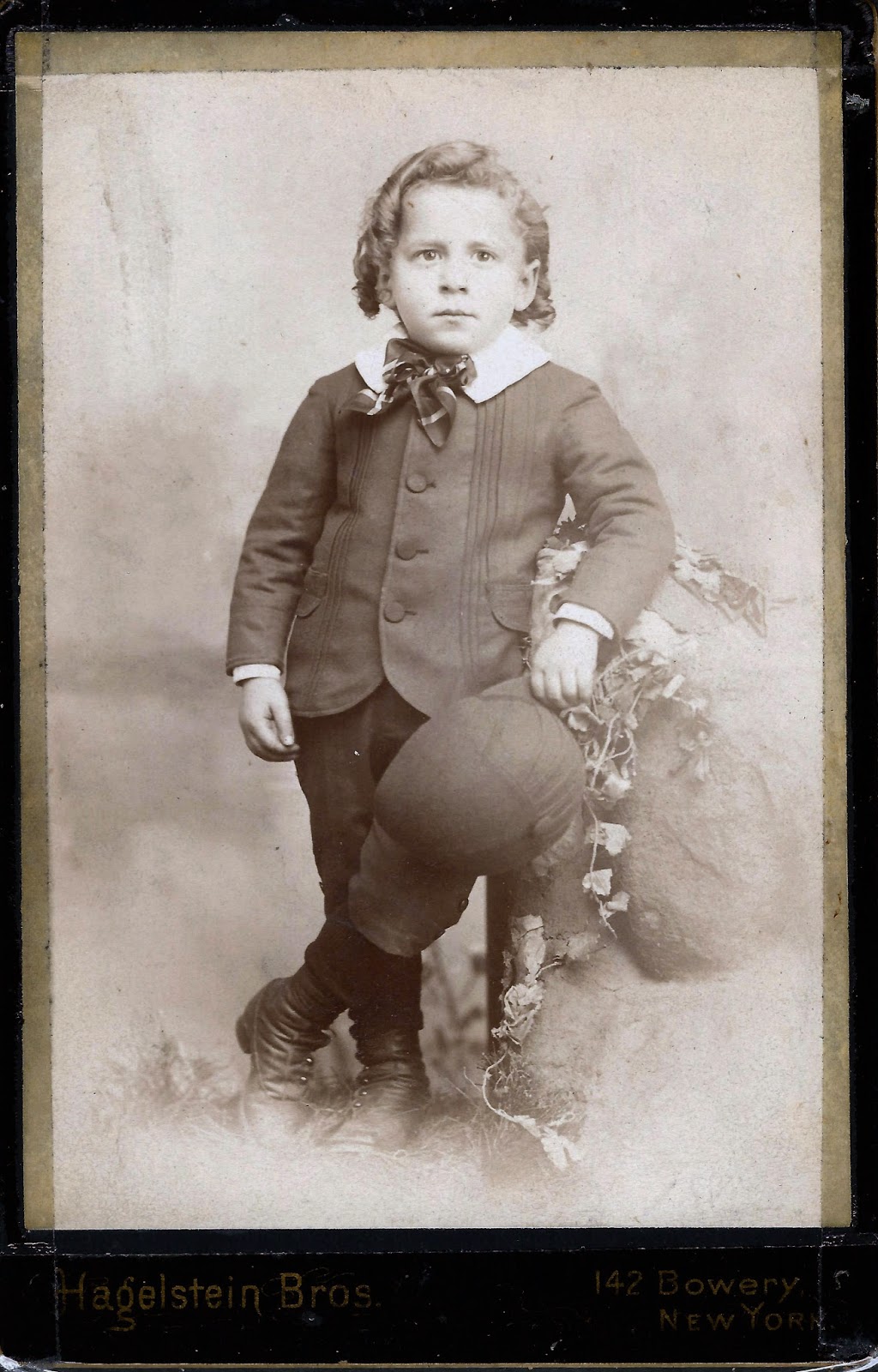 I ran across your blog while researching the provenance of a photograph of my grandfather, Ferdinand Ephraim Fink (b. 1885, New York NY, d. 1961 Brooklyn NY). The print carries the Hagelstein imprint on the bottom.  The handwritten caption on the back reads "Daddy when he was 4 years old." I believe that was written by my aunt Doris.  That would have made the date of the portrait 1889.

Anyway, it looks like you are on your way to recreating the Hagelstein archives. Hope this helps.

For more information on the history of Hagelstein Bros., go to this link