A Gripping Production of An Inspector Calls at Maltz Jupiter Theatre

J.B. Priestley’s An Inspector Calls, a cautionary moral tale encapsulated in a mystery, is successfully portrayed by accomplished actors under the fast-paced direction of J. Barry Lewis at the Maltz Jupiter Theatre.  It is a period piece reminiscent of Downton Abbey or Upstairs, Downstairs, with the “downstairs” staff silently bearing witness to the conscienceless actions of their “superiors.”

Although written at the end of WW II, the play is set in 1912.  As Europe emerged from WW II, J. B. Priestley saw the irony of calling WW I “a war to end all wars”, and realized the dangers of relying on the privileged aristocracy to ameliorate the travails of the masses.  This play remains relevant for today’s audience. No doubt J. B. Priestley would have seen parallels to the present with a plutocracy now permeating our government.

The entire play takes place on one evening in 1912 at the home of the wealthy Birling family who are celebrating the engagement of their daughter Sheila to Gerald Croft, who is the son of one of Birling's competitors in the mill business.  The family patriarch, Arthur Birling (Rob Donohoe) is particularly pleased by the union as it will probably be good for future profits.  He is the quintessential capitalist, in his ineffable aristocratic way pontificating that "a man has to look after himself and his own."

It is all very jovial but that initial scene takes place behind Dadaesque style suspended windows which convey a sense of unreality.  The “downstairs” help sit stoically listening while the festivities are underway.

Suddenly an Inspector Goole (James Andreassi) arrives to question the Birling family about the apparent suicide of a young girl, Eva Smith.  The abstract windows have been lifted from the scene and the proceedings are now realistic.  Goole is arrogant in his demeanor, relentless in his interrogation, insisting that he question each family member in a particular order (all part of the mystery).  Andreassi recently finished a successful run in The Little Foxes at Dramaworks where he was one of the greedy businessmen.  The two plays are jarringly similar in their meaning and are set almost in the same time period.  Andreassi’s performance is mesmerizing and compelling as he had an expectant audience waiting for him to turn on the next family member.

His first victim is Arthur Birling imperiously played by Rob Donohoe.  His character shifts from high handedness to reluctant admission that he did know the girl, having fired her two years before as she asked for a small raise.  He was also concerned about union activity.  So what’s the crime in that, he wonders?  No, in fact he had an obligation to fire her to keep his costs under control (and his profits high, of course).   Donohoe gives a shimmering depiction of a desperate man trying to hold on to his position in society (perhaps a Knighthood?) and keep himself and his family from defamation.

Next, the Inspector turns his attention to the Birling’s eldest child Sheila (Charlotte Bydwell), who confesses that she recognized the photo of Eva as a person who waited on her at a dress shop where Sheila had felt slighted, complained to the shop owner resulting in Eva being fired (once again).  Sheila’s actions are culpable but not criminal..  Bydwell gives a brilliant performance, expressing remorse and guilt for her actions, righteous fury at her fiancé when she learns of his involvement and stunningly becomes the conscience that her family members lack.

Her fiancé, Gerald (Jeremy Webb) is next on the docket.  Here matters escalate as we learn that Eva had changed her name and ultimately became Gerald’s mistress.  At this point the family is collapsing upon itself.  Webb plays the consummate aristocrat now humiliated in front of his fiancé and her family.  He is full of contrition while attempting to maintain his aristocratic demeanor.  An experienced actor, he makes us feel sympathy and loathing simultaneously.

Enter the matriarch Sybil (Angie Radosh) who is the head of a women's charity.  She had recently rejected Eva Smith’s plea for charitable help although she knew Smith was pregnant.  Smith called herself Mrs. Birling, which infuriated Sybil even further.  Radosh is the classic condescending grand dame, scoffing at the Inspector, rejecting any fault of her own or her family members.  She is a consummate actress and when she speaks, the audience is captivated.  Her mood swings from arrogance to stricken conscience to haughty elation when she believes it all a hoax is a master class in acting.

Finally, attention is paid to the young adult son of the Birlings, Eric (Cliff Burgess), who is also connected with the young woman, but it would be a spoiler to reveal more.  Eric is an alcoholic and by the time he is questioned, the moral culpability of all has been well established.  Burgess is a very versatile actor and portrays the troubled scion of a wealthy family with the physical skill and emotional clout of a spoiled unprincipled young man.

Interestingly, most of the characters briefly break the fourth wall to plead their case directly to the audience.  This brings the audience into the play as we all ultimately have a stake in our own conduct and the outcome of our actions.  We have just witnessed a multitude of societal misdeeds that unfold every day in thousands of ways.

With the finishing of the questioning, the family implodes upon itself culminating in an explosion, as if a bomb has been dropped on the house. The mysterious Inspector departs with the admonishment “each of you helped to kill her.”

Gerald, who went for a walk to cool off and to reconsider his broken engagement, returns to the shambles of the house, and finds everyone in utter abasement.  But he brings a theory which seems to exonerate the family, giving them, especially Arthur, false hope that it was all fabricated (although what they confessed to actually took place) by this unverified Inspector Goole, for what reasons, unknown.

The content of a phone call at the play's end is like a sledge hammer dropping.  And suddenly, bathed in stark bright light is Edna (the incomparable Elizabeth Dimon), the head of housekeeping in a silent but disapproving role, and behind, a handful of refugee, hungry and poor onlookers, the silent jury.  It is an absolutely riveting production, without intermission, that gathers momentum until the mystifying conclusion.

Priestly is an indirect literary descendant of Charles Dickens whose focus on social conditions and the bleak prospects for the masses were endemic to his work --  although, Dickens was not thought of as a socialist, more as a humanitarian.  His works were not political.  J.B. Priestly was a socialist, but An Inspector Calls is not a polemic.  It merely cries out that no man is an island.  We are a society and even our slightest actions have ramifications.  If we are to reject “the dreamers” we, as a society, bear responsibility.

As the play’s multiple Carbonell Award-winning director J. Barry Lewis commented “Such plays remain relevant because they portray everyday people – you and me – often at our worst. While as an audience we are voyeurs to the story, we may see ourselves in the choices and mistakes that each of the characters make. An Inspector Calls explores the capitalistic nature of society, the hypocrisy of the Victorian and Edwardian eras and examines the role of the individual and their responsibility to their fellow man.”

In fact the staging endeavors to make the audience feel somewhat complicit as well.  Kirk Bookman’s lighting design bathes the stage, and sometimes the audience, in an eerie bright light.  That combined with resident sound designer Marty Mets’ rumbling sound, piercing at times, heightens the tension and the culpability of all. Tracy Dorman's costumes are stunning, period perfect. 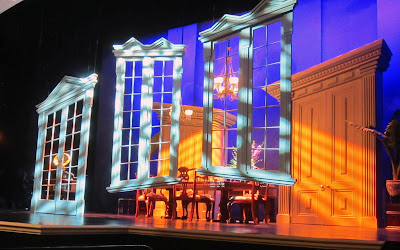 Victor Becker’s imaginative scenic design captures both the surrealism and the realism of the production.  It is one of Maltz Theatre’s most successful plays of the season.  No wonder when we entered the theatre for last night’s production a sign read “this performance sold out.”