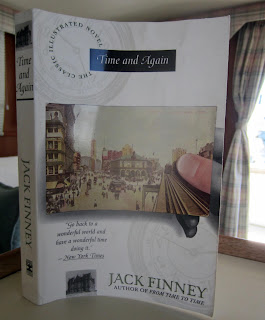 While An American in Paris transported me to post War II Paris, the glorious Gershwin music brought me back to a New York of another time, a segue to the next novel I selected from my “bullpen bookshelf,” Time and Again by Jack Finney.

Compared to Fortune’s Rocks, the novel I wrote about in a prior entry, this is lightweight as far as literature is concerned but a compelling read nevertheless.  It harkens back to the nascent roots of my reading life.  My parents were not readers, so I had to fend for myself.  As a teenager I discovered science fiction, particularly H.G. Wells and his classic, Time Machine.  His novels ultimately led to other SF writers such as Jules Verne, Ray Bradbury and Isaac Asimov (with whom I briefly worked early in my career on a series of SF reprints).  Finney’s novel is science fiction, but it is also a mystery and romance novel as well, and most prominently, an historical portrayal of NYC in the early 1880’s.

As some of the novel takes place around Gramercy Park, and lower Manhattan, it is evocative of my early working life: 100 Fifth Avenue during the summers of 1956 – 1964 for my father in his photography studio during my high school and college years, and from 1964 – 1970 at 111 Fifth Avenue, only three blocks from my father’s studio, my first job in publishing.  Those buildings were built soon after the era described in Finney’s novel.

The novel’s protagonist, Si Morley, is an illustrator for a magazine in 1970 (when the novel was written) and he is selected for a secret government project involving time travel.  No complicated machinery involved, but instead a clever conceit involving hypnosis and self-hypnosis, so the reader needs to merely suspend belief.

Needless to say, there are the obvious themes such as the danger of disturbing the past so as not to affect the present, and that is a fine line Si has to walk.  He makes multiple visits and has follow up debriefings from his government overseers.  His last visit becomes a more involved and revelatory one, his becoming more a person of the late 19th century and getting to know the people of the time, not as images of the long deceased, but real, living people.  When Finney deals with that, it gave me the chills.  These are the New Yorkers who passed through Ellis Island. 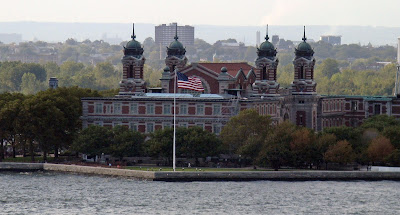 Si catches a Third Avenue horse drawn bus, on a cold winter’s night in 1882:  Here in the Third Avenue car, my feet ankle-deep in dirty straw but still cold, toes a little numb, I caught a glimpse – through the window of the closed door ahead – of the driver as he drew back on the reins to bring the car to stop.  A middle-aged woman, her face as Irish as an anti-Irish cartoon on a back page of most any “Harper’s Weekly,” climbed aboard.  She wore a heavy knitted shawl over her gray hair that covered her shoulders too; she had no other coat; she carried a basket on one arm.  As she opened the door, the cold air rolling in and stirring the straw in the aisle, I heard the horse’s hoofs slipping and clattering for a purchase, heard the crack of the driver’s whip, and just a the door closed I saw the driver’s body move as he stamped his feet, hearing the muffled sound of it, and he suddenly turned real for me as I understood how cold he must be out there on that open platform.

And then the city, too, turned real, this car no longer a quaint museum piece of the future, but of the here and now:  solid, scarred, uncomfortable, dirty because the straw on the floor was stained with tobacco spit driven by a harassed overworked man and pulled by a badly treated animal.  It was cold out on that platform, I knew that, but I got up, walked up front, slid open the door, and stepped out pulling the door closed behind me.  I had to talk to this man.

And indeed Si does, nearly freezing in the process, learning of the man’s struggle to make a living at $1.90 a day to support his wife and two children, working 14 hours a day.  The heart of the issue, which is also examined in Anita Shreve’s novel Fortune’s Rocks, is the extreme differences in social strata, still rife in our modern times.  Our families economic and class status still governs much of our future working lives, hard work being secondary. As the driver relates to Si: Nine tenths of the people in New York find scarcely a moment in their lives which they can call their own, and see mightily little but misery from one year’s end to the other.  How is it possible for me to thank God in my heart for the food he gives me for life, while every morsel I eat I earn with my toil and even suffering?  There may be Providence for the rich man, but every poor man must be his own Providence.  As for the value of life, we poor folks don’t live for ourselves at all; we live for other people.  I often wonder if the rich man who owns great block of stock in the road and reckons his wealth in the millions does not sometimes think, as he sits at his well-filled table and looks at the happy faces of his children, of the poor car driver who toil for his benefit for a dollar and ninety cents a day, and is lucky if he tastes meat twice a week and can give the little ones a home, warm clothes and blankets for the winter.   Could Dickens have said it better?

The guiding rule for Si during his time travel is “observe, don’t interfere.”  To do the latter is to possibly change the present, perhaps substantially.  Can the empathetic Si actually abide by the rule?  That is one of the mystery themes running through the novel. I’ll leave the ultimate answer to the reader, but suffice it to say, Time After Time is a compulsive read, especially for an old Sci-fi veteran like myself.  I found it particularly amusing, though, when Si finally returns to 1970 from his last round trip, the world he describes, one from 45 years ago, seems as foreign to me now as the 1880’s did to Si.  Change, one of the few things one can count on in life, in our hyper-cyber world seems to have taken on a geometric construct. 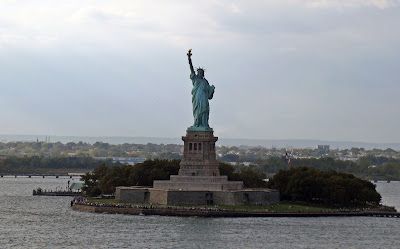