We attended concerts two nights in a row.  As it turns out, they are like the bookends in my life.

I began my love of music in my early teens, the music of rock ‘n roll.  In college my musical allegiance morphed to classical.  As I play the piano, my adult years have been consumed by the Great American Songbook, and Jazz.  As I’ve matured I’ve come to appreciate some opera and in particular the potent instrument of the human voice. 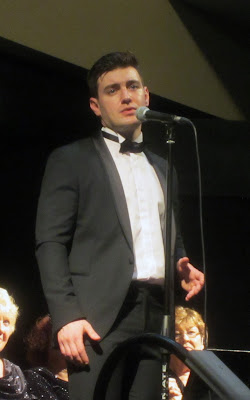 Last night we revisited a performance of one of the world’s great tenors, Emmet Cahill, who returned to the Holy Name of Jesus Catholic Church in West Palm Beach.  Last year when I reviewed Cahill’s concert I had thought that his titanic talent warranted “a bigger boat” but nonetheless he returned to this same church and I understand why.  He began singing as a child in his home church in Ireland with his family and besides being a proud Irishman from the town of Mullingar; he is a religious young man as well.  Interestingly his love of these essential elements of his life transcends the ambition of many of his contemporaries.  Thus, he is content to allow his career to develop rather than rocketing overnight which perhaps it could if he pursued it at the expense of other values.  I have profound respect for him as a human being, not to mention as an astonishing artist.

He is also loyal to the Robert Sharon Chorale, the 84-voice-strong local community chorale which appears with him at the church, usually performing as an opening to Emmet’s solo appearance but sometimes backing him up as well.  His voice, though, needs no backup, other than his very talented accompanist, Seamus Brett, an extraordinarily gifted pianist.

The format of last night’s concert was similar to last year’s with perhaps more emphasis on liturgical and Irish pieces, but still a number of Broadway pieces so suitable for his voice such as “This is the Moment” and “Bring Him Home.”  Of course, with St. Patrick’s Day around the corner, his Irish upbringing impacted his musical selections this time around.

Many of the pieces he sang were from his new CD Blessings of Music which includes “Be Thou My Vision, "Galway Bay," "The Gaelic Blessing," "Amazing Grace," "Ag Criost An Siol" (Christ is the Seed"), "Panis Angelicus,", "The Last Rose of Summer," "Moon River," "Danny Boy" and "How Great Thou Art."

As with last year, the audience was invited to shout out some pieces for him to sing and Seamus Brett would arrange them on the fly and Cahill performed them as if having rehearsed them for that particular concert.  I asked him to sing “Children will Listen” which he knew was from Sondheim, but said he’d better practice that.  And so I wait for Cahill to take that next step in his career.

I had selfishly asked his publicist about those plans and she said “Emmet has returned to his first musical love, opera, so don't be surprised if you hear him sing a bit of that at his concert. He's been training with a voice coach and fans will tell you Emmet's voice has more resonance now (and he sings in a higher key!). Yes, he'd love to do a Broadway musical one of these days. He told me that opera is a way to get into musical theater.”

And opera he sang, a superlative rendition of “O Sole Mio – which he also performed last year, but this time with a discernible intensity of voice and clarity which elicited another rousing standing ovation.

And as he said, he would not be let out of the auditorium on the eve of St. Patrick’s Day without performing “Danny Boy” which I managed to get a brief clip of and posted on my Twitter feed.

What would St. Patrick’s Day be without a rendering of “Danny Boy?” We attended Emmet Cahill’s concert last night. His clear and powerful tenor voice soars. I reviewed last year’s concert https://t.co/VzBla5FYL9 and it was soul-rewarding to see him again,a star in the making pic.twitter.com/xLhdyTlq5k
— Robert Hagelstein (@lacunaemusing) March 15, 2019

Emmet, you had us at the words “glad to be back” and we gladly look forward to your next appearance here and will watch your career with interest and amazement.  You are a unique talent, a captivating personality, and are truly blessed with a golden voice.

It’s hard to segue from Emmet to the dynamic denizens of Rock ‘N Roll, so apologies to Emmet’s fans, but welcome to those who remember the 50’s.  The night before seeing Emmet I experienced that other end of the “bookend” referred to at the beginning of this entry, and that is seeing One Night in Memphis at the Maltz Jupiter Theatre.  This included the original cast members of the Broadway hit Million Dollar Quartet.  In effect it's a concert rendition of the show which was about a legendary one night session in Memphis at the birth of Sun Records, a jam session featuring Carl Perkins, Johnny Cash, Jerry Lee Lewis and Elvis Presley.

Carl Perkins was my first favorite as a kid, a cross over performer of rockabilly and country.  His big hits were the original rendition of “Blue Suede Shoes” (before Elvis’ version), “Honey Don’t,” “ Everybody’s Trying to be My Baby” and he was quickly followed by Jerry Lee Lewis  (“Whole Lot of Shakin' Goin' On,” “Great Balls of Fire”), Johnny Cash ("Folsom Prison Blues," "Ring of Fire") and of course the most famous of them all, Elvis Presley (“Don’t Be Cruel,” “All Shook Up”).  These are but a FEW of the songs performed by the four talented guys in the show.

Normally, I don’t seek out performers who are imitators of famous entertainers, but will make an exception for this show as with every passing moment they seemed to BECOME the originals.  This particularly applied to the performer who played Elvis, as he was under the most scrutiny and at first your senses reject him as Elvis, but quickly he won over the audience.  I still have Elvis’ first 33-1/3 record he recorded for RCA.  My wife, Ann, actually saw him in person in 1956 at the Fox Theatre in Atlanta as an Elvis crazed teen! 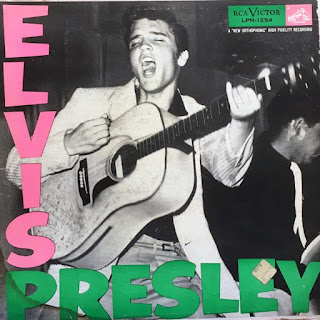 John Mueller who played Carl Perkins was particularly effective as his guitar playing accompanied all the performers throughout the show.  Blair Carman as “the Killer” is a very talented pianist, convincing as Jerry Lee Lewis, even “tickling” the ivories with the heel of his shoe.  Shawn Barker plays the "Man in Black," Johnny Cash and in one song manages to sing a lick an octave below bass.  Truly, a crowd-pleaser.  Finally, Brandon Bennett as Elvis undergoes that transformation before our eyes.  And boy can he twist and shake!

Heartfelt thanks to all the many talented artists in this world who bring the joy of music into our lives.


The applause was thunderous, the audience in raptures, a young man singing his heart out, so much talent and personality wrapped up in a dimpled package.  Here is a young singer on a solo tour with hundreds of ardent fans making their way to see and hear Emmet Cahill.  He is an Irish tenor who has performed with the renowned Irish singing group, Celtic Thunder, all over the world.  On Thursday night, he made his second appearance in the West Palm Beach area, again accompanied on several numbers by the Robert Sharon Chorale, the 84-voice-strong local community chorale.

Cahill is from Mullingar, County Westmeath, the same setting of John Patrick Shanley’s play Outside Mullingar. Irish theatre is one of my favorite theatre experiences so I was particularly intrigued by the opportunity to see the performer whose debut album, Emmet Cahill's Ireland, went to number one on the Billboard World Music chart.

He made his Carnegie Hall debut in New York City recently and this fall he will sing in 75 cities across North America with Celtic Thunder on their 10th anniversary "X" tour.  But for now he is embarking on a multi city tour as a soloist which will take him to nearly a score of other US cities during the next two months.  So expect to see him somewhere!  He promises to return to the West Palm Beach area sometime in the future as well.

Cahill played to a packed house and it’s no wonder.  He is one of the most dynamic and personable, not to mention immensely talented, singers I've seen.  His program on Thursday naturally included several Irish classics such as “Danny Boy”, “When Irish Eyes Are Smiling”, “An Irish Lullaby” and “Wild Mountain Thyme.”  “I am very proud to be Irish,” explains Cahill. “I want people to feel a real connection to the songs, as well as the people and the stories that they represent.  There has always been a special relationship between the Irish and American people and I want to further enrich that friendship.”

As his performance was in a religious setting, the Holy Name of Jesus Catholic Church in West Palm Beach, and he has strong religious roots beginning his singing career at his own local church in Mullingar, he sang several moving hymns including a tearful, heartfelt performance of “Amazing Grace.”

His tenor voice is strong but clear.  He manages to bring forth so much emotion and clarity with his voice, an instrument onto itself, with never an inaudible word.  Cahill can deconstruct a song to certain simplicity so not one emotive moment is lost on the audience.  It doesn’t hurt that his accompanist, Seamus Brett, is an extraordinarily gifted pianist who knows how to showcase this rising 27 year old star.

They even challenged the audience to suggest six or seven songs which they would perform as unrehearsed requests and then extemporaneously they strung together a medley of those songs.  One such request was “O Sole Mio."  Enrico Caruso and Mario Lanza would have been proud, maybe envious, of Cahill’s rendition which demonstrated his classical vocal training at the Royal Irish Academy of Music in Dublin.

But Irish folk songs and liturgical hymns are not Cahill’s only strengths.  He is equally comfortable with the Great American Songbook and Broadway.  In fact he said that Rodgers and Hammerstein’s work is among his favorites and to illustrate, he delivered a rendition of “Some Enchanted Evening,” wringing out all the emotion and depth from that song.  His rendition of “This is the Moment” from Jekyll and Hyde was thrilling.  The nostalgic favorite “Moon River” was as beautiful as those Irish folk songs.

He said that among the songs he first sang on stage as a professional was “Bring Him Home” from Les Miserables.  He is much too young to play Jean Valjean, but you wouldn’t know it from his masterly performance.  I’ve never been able to hear that song – or play it on the piano – without a tear in my eye, and his performance, with so much emotion, brought the house down with yet another standing ovation.  Clearly, so much of this young man’s future might be directed into the oeuvre of Broadway and the Great American Songbook.  He has the presence and that rare emotive gift for those songs, while never having to desert his unique Irish folk roots.

His YouTube performance of “Bring Him Home” from a 2015 USA tour when he was only 24 years old, clearly presages his brilliant future.  We look forward to seeing him again, soon.  Thank you Emmet!