Ann and I boarded the Metro North at South Norwalk station anticipating a wonderful night of good theater and dinner.  I had purchased tickets to see Clybourne Park by Bruce Norris, well before it received the Tony Award for Best Play.  It is now near the end of its run on Broadway.  The play had opened off Broadway a couple of years before, played London, and had toured some of the top regional theaters before returning to the Great White Way.  Besides winning the Tony, it had won the Pulitzer, but our main reason for seeing the play is that next season Dramaworks is reviving Lorraine Hansberry’s classic A Raisin in the Sun. 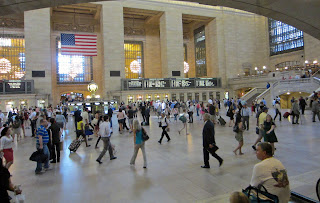 Clybourne Park is both sort of a prequel and sequel to Hansberry’s relatively tame but groundbreaking work about racism in, ironically, a suburban neighborhood in Chicago, the environs where Barack Obama rose in his political career.

The first part of the evening, our pre-theatre dinner at Glass House Tavern, was superb.   We’ve been there before, a great restaurant destination in the theatre district, with both a fixed price pre-theater and standard menu.

Unfortunately, Clybourne Park was disappointing, although the mostly out of town audience was captivated by its in-your-face racial invectives and humor. Maybe we were just expecting something more, to feel engaged in the production, but I wasn’t and felt emotionally duped.

I am not going into the details of the plot – it has been written up and down and there is nothing much I can add, other than to briefly summarize that it takes place in two acts, the first in 1959 and the second fifty years later, in the same house in the fictionalized “Clybourne Park.”  The first act depicts the sale of the house to a black family, the same one Hansberry wrote about, the Youngers (who we never see). The lily-white neighborhood association is up in arms about the sale, but that same act carries the revelation that the current owners had lost their son in that house, his having committed suicide after returning from the Korean War under a cloud of possible war crimes.  The second act puts the shoe on the other foot.  It is now a middle class black family selling the house to a white couple who are in the vanguard of gentrifying the neighborhood. (Whole Foods is right down the road!)

There is some very clever dialogue, much of it delivered with such breakneck rapidity that we had trouble hearing all of it.  Maybe we’re at the age of needing one of those assistive listening devices given out at theaters, but I don’t think so.  Of course the Walter Kerr Theatre, a venerable institution, perhaps has outlived its useful lifespan.  The seats certainly have.  The configuration was designed for a much earlier generation, when, indeed, the average weight of an adult was 150 pounds.  Those were the days when people dressed up for the theatre, not arriving in their shorts, their arms and the rest of their bodies spilling over into their neighbor’s seats.  Half of the audience looked like they were about to get on an airline and we all know what that now looks like.  The space between rows is mere inches.  No leg crossing here, assuming you can fit your legs in the row at all (we were second row, mezzanine).   If I was not at the end of the row, I would have fled the theatre in a claustrophobic angst.

Throughout the play I was aware of something I’m never conscious of while watching a great play: that indeed I am watching a play.  Here are competent actors going through the motion of delivering lines, traversing the stage as competently directed.   I suppose all of this was convincingly done judging by the audience’s reactions, but I never felt engaged, although Norris had his opportunities for some real drama, particularly with the death of the son.  He touches on that issue, but never really explores it.  He could have gone to emotional places where Arthur Miller has gone in his work, but as quickly as it arose, its development was abandoned, the symbolic trunk of the son left behind, buried, but unearthed fifty years later, just like the racial issues.

Consequently, the play is more a device for delivering Norris’ misanthropic view of the “progress” we’ve made on race in America.  Could it be the paucity of great theater that renders merely an interesting play, with edgy humor, a prize winner?

So, while being conscious that I was watching a play, I also felt that I was watching a bunch of stereotypes, stick figures, no one really drawn out in any engaging way although Russ’ character, the father of the boy who committed suicide, played by Frank Wood, comes closest to one I can empathize with.  But sometimes his lines were delivered with such briskness they were not decipherable from the mezzanine.

The dialogue at times, with its edgy racial humor, was well timed, and I suppose that is the glue that holds the play together, but much of it was well telegraphed, and in its poor taste meant to be tolerated by what we would like to think is a post racial world.  But is it?  At times I thought of the 1970’s sitcom All in the Family, which implied much of the same humor decades before.  The difference here is the humor is now explicit.  Norris is clearly an equal opportunity insulter, with ne’er a good word for any ethnic group of people, including the WASPS howling in the audience.

I tried to take notes while watching the play, which is my general practice, but as I lost interest, or, better put, never got to the point where I felt I was part of the action, I put down my pen (usually I can’t read half of what I write in the dark anyhow).  But I did get one quote near the beginning of the play which I think resonates right to the end, one of the characters in the 1959 first act saying “we all have our place.”  And I think that is Norris’ point.  Nothing has really changed in the intervening fifty years, in spite of having a President of mixed racial heritage.  One of the characters at the end of the play, after all the confrontational humor says something to the effect, “instead of doing this elaborate dance, what we’re really saying, it’s about race, isn’t it?”  Indeed, we’re still battling out the shame of the heritage of slavery, whether it is the beer summit involving Henry Louis Gates, Jr.’s arrest, or the Trayvon Martin incident , Norris makes it clear that while some things are for the better (we can at least laugh and talk about it), the “change” we have long hoped for remains elusive. Racism is still alive and well in America.  And the latent racial tentacles could still impact the coming presidential election, although it miraculously eluded its grasp last time around
.
Great theater?  No. But as a philosophical statement, right on the mark.