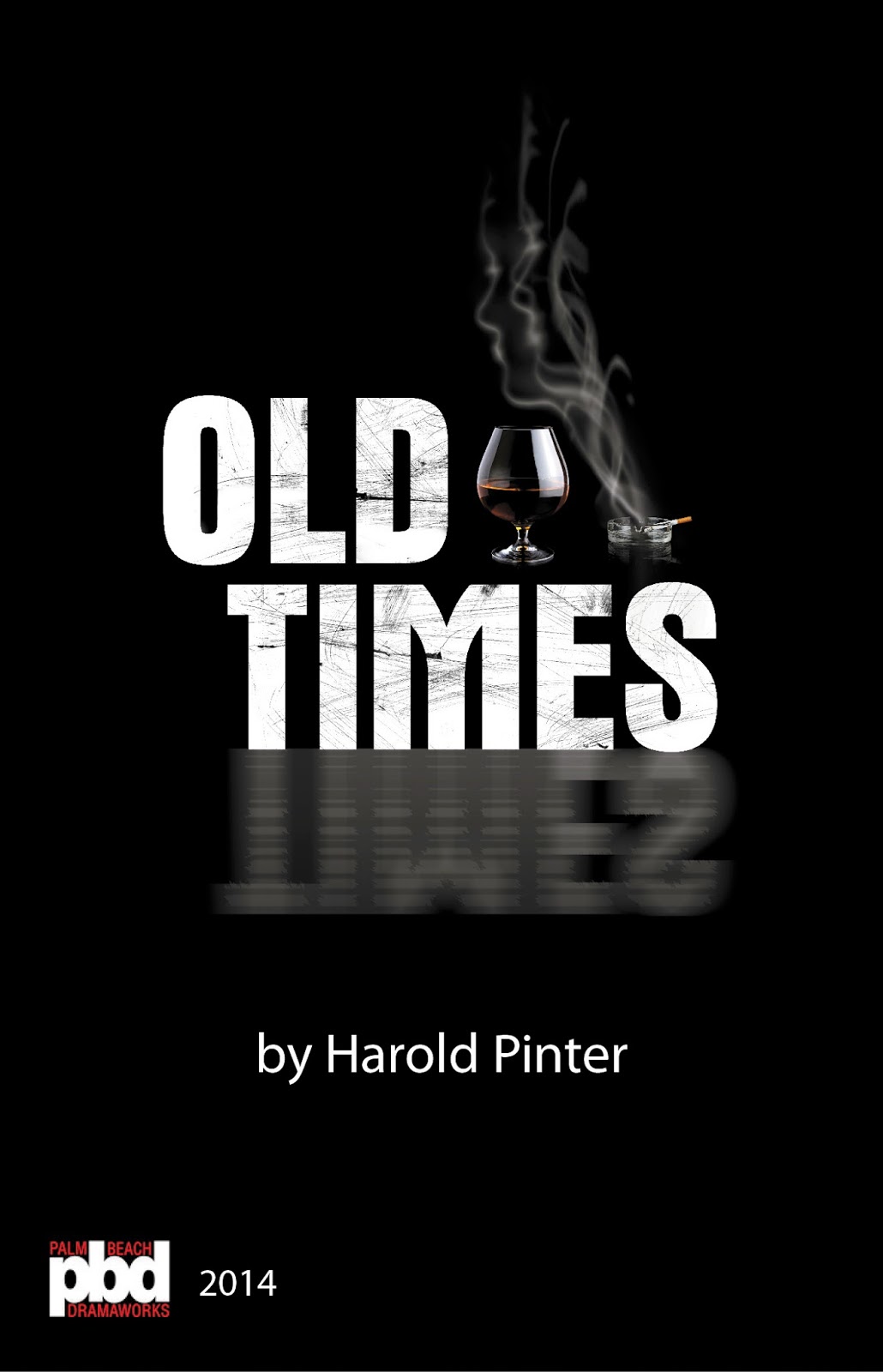 If you try to "figure out" Old Times you might miss the performance.  At Dramaworks' "Knowledge and Nibbles" -- which is held the afternoon of the first preview performance (the one we attend) -- Resident Director J. Barry Lewis compared it to a jazz riff (my thought exactly when I read the play beforehand). It is meant to wash over you like a piece of music, performed by the three major "instruments," Deeley (a successful film-maker), Kate (his wife) and Anna, a friend of 20 years ago who is visiting the couple in their gentrified farmhouse near the English coast.

It is about the unreliable, fungible nature of memory and its affect on relationships, told in "Pinteresque," a variation on the theatre of the absurd. The opening of the play introduces us first to the married couple as they are waiting for the arrival of Anna (although she is already on the stage with her back turned to the audience). Parts of their dialogue are like an overture to what will follow -- the ambiguous later recounting of the past in the play.  In just the first few minutes, phrases like "I think," "I think so," "what does that mean," "when you look back...all that time," "can't you remember," "it's a very long time," "she remembers you,"  "do you think," "I didn't know," "I don't know," "I don't think so," and "I hardly remember her" are tossed around, foreshadowing the action (and the pauses) that will follow.

At one point Anna says (reinforcing the dreamlike feeling of the play), "Can you see that tiny ribbon of light?  Is that the sea?  Is that the horizon?"  That sort of sums up how I felt looking for clarity (not Pinter's intention).  Instead, look for transparency in Pinter's pauses, as much of the story is told in those silent moments.

The plot is ostensibly simple, but beneath the words are questions.  An old friend visiting a married couple, Anna now living in Sicily married to a wealthy Italian (an object of some jealousy on Deeley's part? Deeley has been to Sicily. Did he see Anna there?).  Anna and Kate were good friends (perhaps lovers?) before Kate met Deeley (or was it before or during the time Deeley knew Anna?).  It is a dance of divergent memories and even roles (are they all really one person, or is Anna dead and Kate and Deeley are discussing her?).  As Anna says at one point:  "There are some things one remembers even though they may never have happened.  There are things I remember which may never have happened but as I recall them so they take place."  That sort of sums up the entire play.

There is one particular conflicting memory and that is Deeley's description of his meeting Kate for the first time at a showing of the film, "Odd Man Out" (the title could describe Deeley's relationship with Kate and Anna).  Perhaps Kate had gone to the film WITH Anna, as later Anna asks Kate whether she remembers those days when they explored London, they had gone to "some totally unfamiliar district, and almost alone, saw a wonderful film called "Odd Man Out." (Emphasis, mine.)  The opening title of this 1947 British film noir reads in part, "This story...[is] concerned...only with the conflict in the hearts of the people when they become unexpectedly involved."  Indeed, the characters in Old Times are "unexpectedly" but, more so, inscrutably involved.

Also, Deeley and Anna might have met (before Deeley met Kate) at the "Wayfarers Tavern," although Anna does not think so, but Deeley claims to remember her vividly, describing exactly what she wore. Later, Anna acknowledges "It was me.  I remember your look...very well.  I remember you well."  Kate turns to Anna and then says "But I remember you.  I remember you dead."

Given the ambiguity of this play, its success is even more dependent on the performances of the three characters, their direction and the staging. The actors, as well as the scenic and lighting designers are newcomers to Dramaworks, but all highly experienced professionals.  As J. Barry Lewis explained, Dramaworks "wanted to work with a group of artists not known to our audience so there are no expectations."  I found this Tabula rasa approach interesting and particularly relevant to seeing Old Times.

As the play's Director, J. Barry Lewis has made the most of Pinter's script, making sure the pauses are as significant as what is said.  It is part of the rhythm of the play, like gaps in memory the action on stage have their moments of rest so the audience can watch the characters, their bodily reactions having as much (or more) meaning than the words. Nonetheless, Lewis moves the action along and this two act play, without an intermission, glides by like a passing dream. 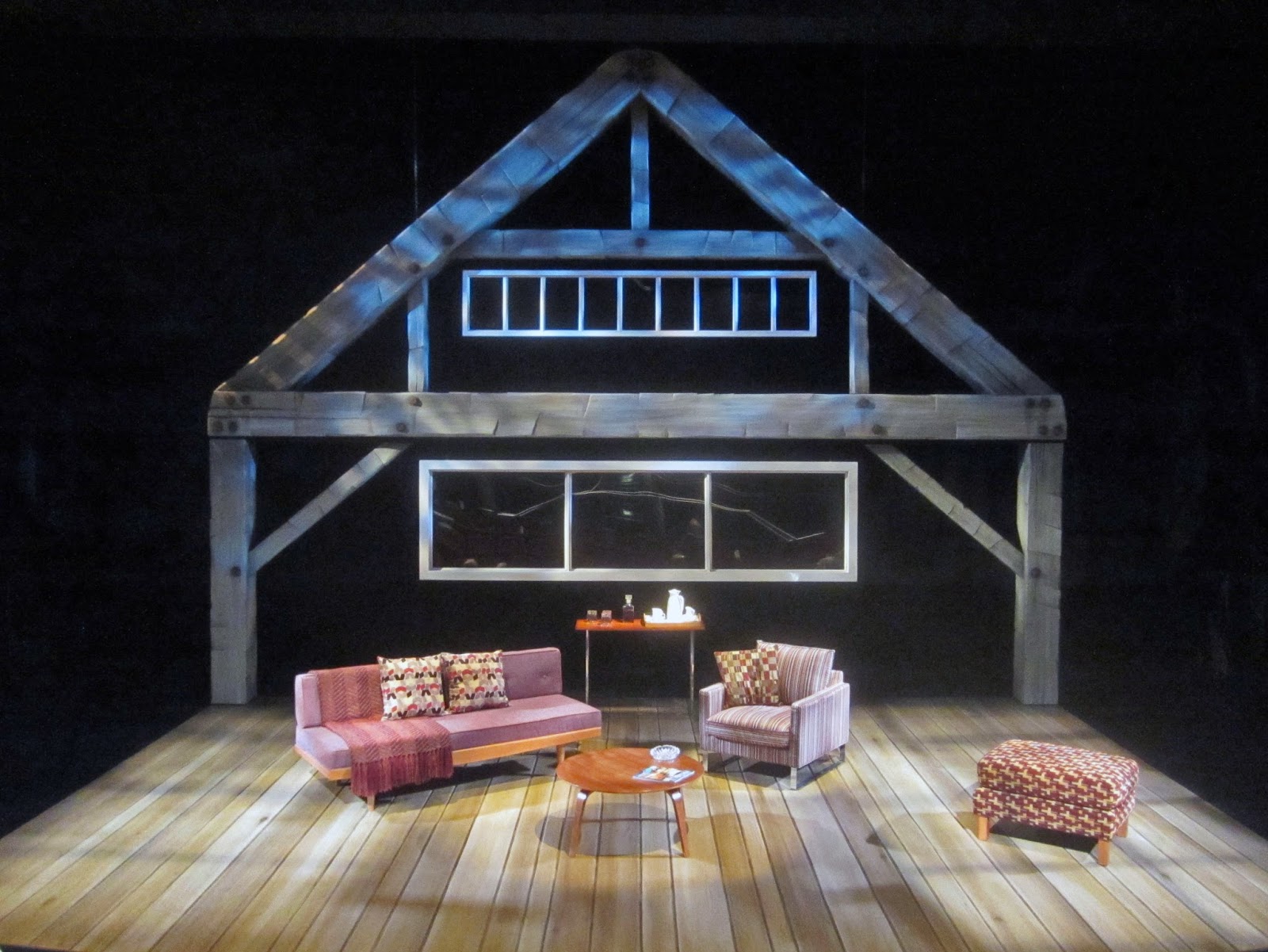 The set is particularly important, as it is real, tangible, denoting something, the action on the stage being so ethereal.  Victor Becker, a highly experienced stage designer, has created an expansive set for the first act.  Becker said the "play needed something grounded"; hence, the beams, reminiscent of the frame of a barn, with the modern windows indicating that the home had been renovated.  The second act is in the bedroom, the top part of the set lowered, "raising" the audience to the second floor, with two divans and an armchair replacing the furniture of the living room.  It is a more intimate set now and this is where the play's tension rises. But as Becker related, it is "less about creating and more about editing -- getting a sense of the play and what it feels like. "

Inevitably, the success of this play depends greatly on the three actors making their company debuts, Shannon Koob (Kate), Pilar Witherspoon (Anna), and Craig Wroe (Deeley).  They are more than up to the task, totally consumed with their interpretations of the characters.  Wroe walks a fine line between the loving husband, the jealous lover, the angry "man out" and manages to carry much of the humor in the play (yes, there are some subtle amusing moments, some of which are delivered with a twist of sarcasm).  Koob has a difficult role as Kate as some of her work is done in silence, the bodily reactions to her husband and Anna, her facial expressions of hurt and anger -- actually seething anger at times and one wonders how Koob decompresses after each performance.  Witherspoon plays a more animated character, a catalyst in the lives of Deeley and Kate, almost like a breath of fresh air entering a stale, worn relationship.  The actors are simply superb.

Paul Black said his lighting design was very different between the two acts, using his craft to "make emotional connections."  As such, the lighting is fluid, moving imperceptibly between colors and intensity.

All elements are in sync to make Old Times another Dramaworks unforgettable performance.  I particularly liked the numerous threads of lyrics briefly sung by Deeley and Anna to Kate, almost as if they were trying to "top" each other, songs written by the likes of Jerome Kern, George Gershwin, Cole Porter, Rodgers and Hart, among others, songs representative of the past, evocative and in keeping with "old times."  As Deeley remarks "they don't make them like that anymore."  Similarly, there are few professional theatres that can put together such a seamless, memorable production of Old Times. 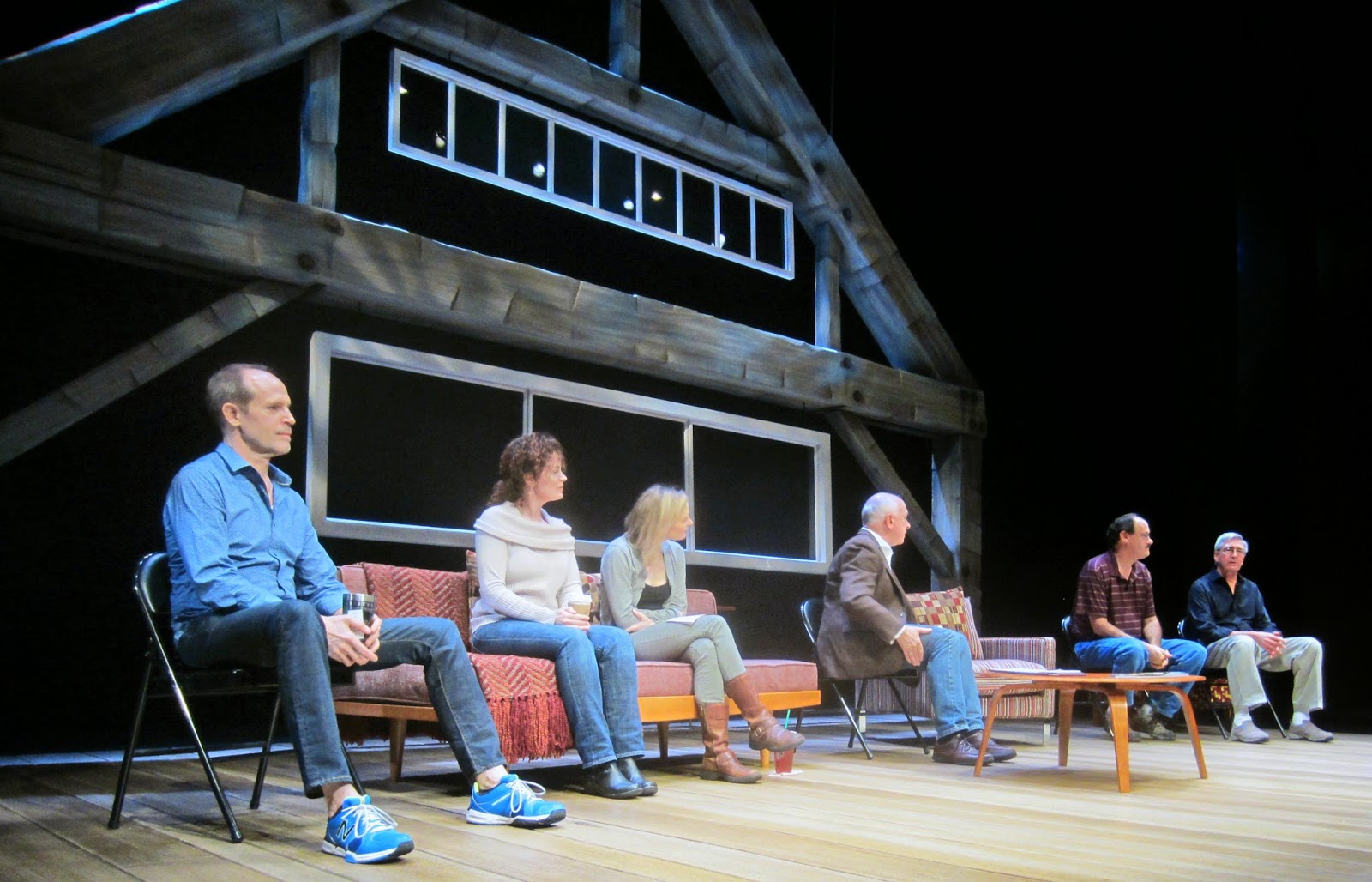