"Stay tuned, but now a word from the sponsor" --- the despicable political advertising condoned by the Supreme Court. The Founding Fathers obviously anticipated ungodly sums of money being raised by corporations and unions for political PACs so elections can be bought and sold by these "people" whose first amendment rights would otherwise be violated. Or at least I guess that is the Court's interpretation.

And to think we are just seeing the tip of the Super PAC iceberg in this Presidential election cycle. The Republican primaries are appalling enough (both in terms of content and political advertising). Just wait until the REAL election gets underway. 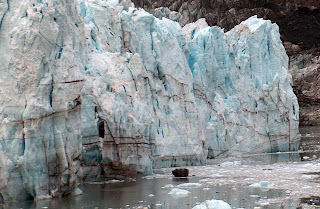 The American electorate is electronic media addicted; broadcast emails, streaming video, Tweets, YouTube, network and cable TV. Outside sleep and work, "video consumption" is the #1 activity, or, if written, preferably 140 characters or less please. Robocalls are part of the political media bombardment. Sound bites over substance.

When motivational research was being pioneered by the likes of Ernest Dichter and James Vicary in the 1950s and popularized by Vance Packard in his Hidden Persuaders, little did they know that some of those principles would become part of a giant advertising machine aimed at buying elections. Advertising 101: sell the emotion, not the pragmatic benefit of the product.

And, so in this political season, we're selling religion, and all the emotions that are attached to the same (and in a negative way, not the way it was used in WW II advertising to spur solidarity and sacrifice): 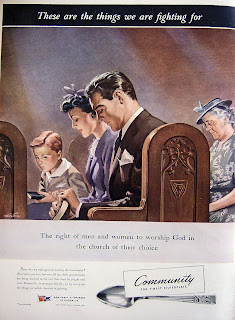 But the real selling job is just getting underway. Sell fear. Just wait until the Super P's roll out their shadowy images of their opponent bathed in a light to look like Jack the Ripper.

The firestorm unleashed by the misogynist "entertainer" Rush Limbaugh regarding Sandra Fluke's testimony to Congress fits the bill as well. Talk show radio is just another media circus of highly charged emotional invectives. This elaborate infomercial is then recycled on the Internet, passing for fact. No sense commenting on vile Limbaugh as the definitive word was posted by Jim Wright over at Stonekettle Station in his recent The Absurdity of Rush Limbaugh. But while Limbaugh's blather has led to some lost advertisers (probably temporarily), the Gingrich "Winning our Future" Super PAC signed on for more advertising! Way to go to win our future!

It is no wonder that a society that consumes movies that are more computer animated than acted, and cannot live without 24/7 video is a perfect target for Super PAC persuasion. Just fork over the bucks and try to buy an election! Sanctioned by the Supreme Court, the same folks who "sponsored" the results of the 2000 presidential election.