The History Boys – A Memorable Lesson Taught at Dramaworks

At first I thought this was a rendition of “Everything You Wanted to Know about the UK Educational System, but Were Afraid to Ask.”  Although knowledge of terms such as Oxbridge, Supply Teacher, A-levels, Sixth-Formers are helpful, the themes in this play transcend time and place.  This is about how boys become men, how teachers affect our lives forever, about the randomness of history and the importance of art.


These weighty themes are examined along with an entertaining pastiche of comedy and popular songs, adding to the play’s representation of English school life as it was in the 1980’s (although heavily reliant on the playwright’s personal experiences in the 1950s).  There is just so much substance in the play I feel like I’m using a toy shovel to mine its depths in this review.


From personal experience I can count the teachers who really mattered in my life on one hand and in particular two, one from high school and the other from college, men who urged me on and to whom I owe my life as it is.  Remarkably, to this day I am still in touch with both of them.   These are the kind of teachers celebrated in Alan Bennett’s erudite The History Boys.


Ironically, my college teacher taught the British Literature class which, little did I know, would come in “handy” for seeing this play.  There are so many references to British poets here, W.H. Auden, Rupert Brooke, Thomas Hardy (albeit primarily a novelist, his poem “Drummer Hodge” is quoted as part of a lesson) , A.E. Housman, Philip Larkin, Wilfred Owen, and Siegfried Sassoon, to name but a few.  Many of those poets wrote about the young men of WW I, the loss of innocence of an entire generation, which is still another theme of The History Boys.


The plot is fairly straightforward.  The headmaster of a boys' school in Northern England hires a “supply-teacher” (temporary teacher), Irwin, who is “results oriented” to help more students get high grades in the “A-level” exams and into the sacred “Oxbridge” circle, either Oxford University or Cambridge University.  He joins the two other teachers of the school’s “sixth-formers,” the exuberant, impassioned, and somewhat theatrical Hector, who has sort of an avuncular relationship with his students, and Mrs. Lintott who employs more conventional teaching methods.


Unlike Mrs. Lintott and Hector, Irwin’s focus is twofold:  helping the students get high exam marks and teaching them how to comport themselves in oral exams and interviews – the polish needed to excel in Oxbridge. If you can’t get in the front door of an historical inquiry, use the back door.  The “truth” is sometimes less relevant than how it is told.  At times this puts him in direct conflict with Hector, who at one point says “I count examinations, even for Oxford and Cambridge, as the enemy of education. Which is not to say that I don’t regard education as the enemy of education, too.”


Early in the play Bennett stages a scene entirely in French, taught by Hector, and in spite of the play being put on in front of an English speaking audience, one can glean the essence of what Hector is trying to do using this idiosyncratic method:  teaching the students about the subjective in French grammar using an elaborate conversation about how one behaves (or “should” behave) in a brothel.  He even involves the headmaster at the conclusion of the scene – passing it off at that point as a hospital scene (hilarious!) -- as the headmaster is trying to introduce Irwin.   It turns out that this lesson has a larger meaning in the play: the subjective in history or what might have been.


The headmaster clearly backs Irwin; especially after Hector is caught “fiddling” with one of the boys while they are riding on Hector’s motorcycle.  This is accidentally witnessed, and as the play makes clear, not unlike many events in history. The headmaster says to Mrs. Lintott: “Shall I tell you what is wrong with Hector as a teacher?  It isn’t that he doesn’t produce results.  He does.  But they are unpredictable and unquantifiable and in the current educational climate that is no use.  He may well be doing his job, but there is no method that I know of that enables me to assess the job that he is doing.  There is inspiration, certainly, but how do I quantify that?  And he has no notion of boundaries….So the upshot is I am glad he handled his pupils’ balls because that at least I can categorize.”


At one point Bennett has some fun at the expense of acting, further emphasizing the chasm between Hector and Irwin. Irwin suggests that a student should downplay his interest in the theatre:  “Then soft pedal it, the acting side of it anyway.  Dons…most dons anyway…think the theatre is a waste of time.  In their view any undergraduate keen on acting forfeits all hope of a good degree.” Hector replies: “So much for Shakespeare.”


Mrs. Lintott has her special moment in the play too, a sudden feminist outburst that leaves the boys, Hector and Irwin momentarily silent: “I’ll tell you why there are no women historians on TV, it’s because they don’t get carried away for a start, and they don’t come bouncing up to you with every new historical notion they’ve come up with…the bow-wow school of history.  History’s not such frolic for women as it is for men.  Why should it be?   They never get round the conference table. In 1919, for instance, they just arranged the flowers then gracefully retired.  History is a commentary on the various and continuing incapabilities of men. What is history?  History is women following behind with the bucket.”  Mind you, this play is set in the era of Margret Thatcher.


The “boys” are equally diverse and interesting, some turning out as we might imagine, and others a surprise.  A follow up of them later in life concludes the play, with some touching moments.


Fittingly, the teachers in the play are all PBD alumni, consummate professionals in every way.  If I were casting this play these are the very actors I’d seek for such pivotal roles. Colin McPhillamy plays Hector with flair, making his eccentricities more heartfelt than bizarre.  One feels compassion for his unusual teaching methods and his relationship with “the boys.”  Cliff Burgess is all business as Irwin who inveigles himself into a “co-teaching” role with Hector, or the “yin and yang” as one student describes the experience.  And yet Burgess makes sure the audience has empathy for him as well, especially in his edgy “approach-avoidance” relationship with Dakin, one of the students.  Angie Radosh plays Mrs. Lintott with the wisdom befitting a teacher who has taught at the same school for a long time.  Rob Donohoe is the headmaster, performing a humorous counterpoint, easily frustrated and bewildered by anything Hector does. But he rises to dramatic moments too. Outstanding performances by all.


The students are all new to PBD, played by Jelani Alladin, Colin Asercion, Kristian Bikic, Kyle Branzel, Mike Magliocca, Matthew Minor, John Evans Reese, and Nathan Stark. All the “boys” are terrific actors and although there are eight of them on stage, each one’s personality shines through.  It was a casting coup to find such a talented group on the regional theatre level.  Special callouts to Nathan Stark’s rendering of Dakin, whose brimming testosterone level and talk of the sexual conquest of the headmaster’s secretary lands him in the inner circle of the boys, envied.  Loss of sexual innocence is yet another theme in the play.  Contrast that to the sensitive portrayal by John Evans Reese as Posner, a boy who feels he is an outsider, desperately trying to connect, in spite of his being gay, Jewish, wanting Dakin to return his love.  And kudos to Kyle Branzel who doubles as the musician, playing a number of popular pieces on the piano for sing-alongs, and to accompany Posner who is able to express himself in songs, including a touching rendition of Rodgers & Hart’s classic Bewitched, Bothered and Bewildered


Once again, special accolades go to the Director, J. Barry Lewis.  How does one put so many people on stage and in constantly changing scenes, the classroom, the hallway/locker room, the headmaster’s office, the coffee room, without breaking stride and dramatic momentum?  Lewis moves his characters at a pace which keeps the audience fully involved for its nearly three hours running time, including intermission. 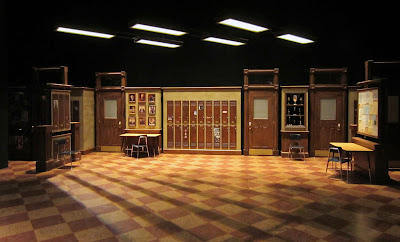 Scenic design by Victor Becker and lighting design by Paul Black work together as those four scenes are revisited multiple times so in all there are more than 30 changes, the actors, mostly the students, moving the designs while lighting focuses on a character on a side of the stage so action is not broken.  Once the scenery is in place, full lighting snaps on.  Aside from the tunes of bygone years sung by the boys, and recordings of Edith Piaf, contemporary 80’s music accompanies the scenery changes, thanks to the sound design by Tyler Kieffer. Costume design by Erin Amico cleverly captured that 80s feeling.


Alan Bennett’s The History Boys is a rollicking intellectual feast, celebrating life-long learning and exploring the importance of art and the nature of history: is it merely a random series of events (or as one student espouses, “It’s just one fucking thing after another”) or events that we impose meaning on after the fact, finding patterns where there are really none? The play’s cadence of language, the quips, the acting out of famous movie scenes by the boys, the songs, and its stream of literary and popular cultural references make this a living, breathing experience.  The staging of this play is a very ambitious and successful achievement by PBD – theater to indeed think about. It gets an “A+” from me.