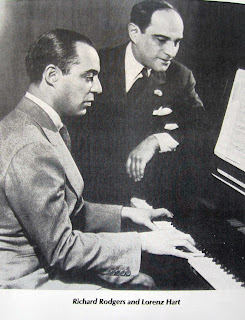 Before Rodgers and Hammerstein there was Rodgers and Hart.  They wrote so many great standards such as Manhattan, My Funny Valentine, The Lady Is a Tramp, I Could Write a Book, Bewitched, to name just a few of my favorites, but sometimes their songs became conflated with the other great standards of the era, those by George Gershwin and Cole Porter in particular.  Yet Rodgers and Hart were trailblazers in their own right.

They met as young students at Columbia University and they seemed destined for one another.  Rodgers of course could write a melody as us mere mortals can compose post cards. Noël Coward once said that Rodgers just “pissed melody.” He was the consummate composer and partner, productive and businesslike. One could always count on Richard Rodgers.  Larry Hart on the other hand was a troubled person. Unlike the “beautiful” people he wrote about and consorted with – first on Broadway and then in Hollywood -- he felt himself to be an outsider, he was gay, Jewish, and diminutive (always photographed standing while Rodgers was sitting at the piano).

His lyrics could be dark and cynical. But I’ve been so accustomed to playing their well known pieces, and as I do not have a singing voice, Hart’s lyrics became submerged in the deep pool of their music.  Furthermore, I've played most of their music from fake books, the melody line or verse only without the introductions.  Their songs without the intros are like birds without feet, homes without foundations.  I have a Gershwin songbook with the intros and I needed one for Rodgers and Hart. To the rescue:  Rodgers and Heart; A Musical Anthology. 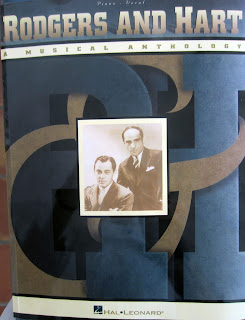 Alas, my songbook arrived but I should have known that in this profit driven world the publisher (Hal Leonard) would chose the less expensive “perfect bound” alternative to spiral binding (such as my 40 year old collection of Gershwin’s songs).  Very sensible for the publisher but a nightmare for the pianist as most songs with the intros are at least 4 pages and turning the pages of a perfect bound book is difficult while performing. Even if one is merely playing for oneself it is frustrating to have to introduce a few bars of silence while trying to turn and pin back a page.

One could try to break the binding but ultimately pages would separate or one could guillotine the book and put the pages in plastic sleeves in a three ring binder, expensive and time consuming.

Ah, for the want of a nail. I knew there would ultimately be an iPad in my life and this was the final straw to tip the scale.  I'd photograph select songs with the iPad (still difficult to hold down certain sections of the book for photographing and having to accept some partially distorted pages, albeit legible). Then do the same for my Gershwin songs and other beloved standards, put them in albums, and then play the music from my iPad, merely swiping pages to “turn” them.  Voila it works! A couple of negatives though.  If your finger resides too long on the page you are swiping, you are returned to the pervious menu of all pages, so I’ve “perfected” the technique of quickly swiping while playing.  Furthermore, the page is about half the size of the printed book.  Good reading glasses to the rescue for that drawback. 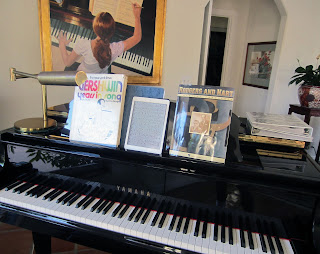 This commitment to the iPad for my sheet music repertoire in turn has led to a certain acceptance about my piano technique.  I've gone into jazz, contemporary, some classical even, but I find the most satisfaction from the standards, particularly the music of the thirties and forties.  I was born too late to live in that moment, but today I find the themes to be as relevant to today as when they were written. So I’m making my iPad music albums all standards focused when playing in public venues, mostly local retirement homes. To date I’ve performed at The Inn at LaPosada, the Hanley Center, The Waterford, Mangrove Bay and most recently a monthly “gig” at Brookdale Senior Living.

And now I can incorporate the introductions to many of the standards which so beautifully set up the songs, sometimes acting as a counterpoint and foreshadowing the content.  Finally, playing the Rodgers and Hart Songbook yielded a double bonus, finding songs that are absent from my fake books, such as their hilarious To Keep my Love Alive, and some songs I’ve rarely heard.  One such song is This Funny World.  Here is where you see the genius of Larry Hart: the lyrics are so achingly cynical -- one can imagine Hart wearing his own heart on his sleeve.

Richard Rodgers’ magnificent melody populates the introduction with minor chords, underpinning the dark lyrics by Hart. (Although, when working with Hart, Rodgers would normally first write the melody.  When collaborating with Hammerstein, the lyrics would normally precede Rodgers’ composition.) Rodgers writes the song in a major key.  Such sad lyrics to such a beautiful melody and the chorus which is also the title of the song is repeated four times just to make sure you don’t forget it!

With my imperfect equipment, in my imperfect recording studio (our living room), I recorded the piece and posted it on YouTube so it plays on all devices.  It helps to read the words before or during the video.

A mop! A broom! A pail!
The stuff my dreams are made of!
You hope, you strive, you fail!
The world's a place you're not afraid of.
But soon you are brought down to earth,
And you learn what your dream was worth.