Writing Home from the Front


When my father served in the Army he wrote letters home as often as possible, and from his WW II Scrapbook I found a photo of him writing one such letter.  I post it here in honor of all Veterans who have served overseas, thinking of their loved ones back home. 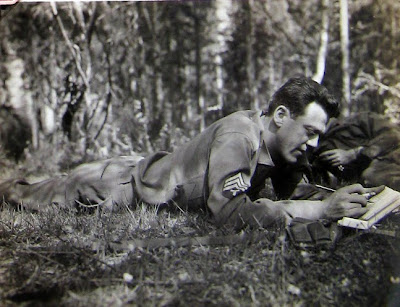 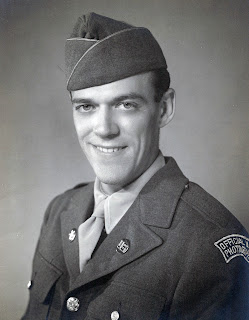 Veterans Day brings thoughts of my Dad, who died of cancer almost thirty years ago.  He was a veteran of WW II, but never liked to talk about it.  I learned more about his service experiences from letters he left behind, and a WWII scrap book he kept.

He was the "accidental soldier" like so many other GIs, ones who were drafted away from their families and friends.  He was a most unlikely candidate for warrior.  Perhaps that is why he brought his profession, photographer, with him, becoming a member of the Signal Corps.  But that doesn't mean he didn't risk his life at times.  He expressed not only his fears in his letters, but his hope he was fighting a war to end all wars as well.  At the war's conclusion he was delayed in Germany as part of the occupying force.  I vaguely remember his return.

I have a deep respect for what he did, and for all veterans who answered the call. The war that lives in my mind was the senseless one in Vietnam.  From a killing field then, to a top tourist attraction now.  My draft status at the time was 3-A as I was married and had a child. By the time the draft lottery was instituted in 1969, I was exempt as I was born before the 1944 birth-date cut off.  But good friends of mine were called, Bruce, Ray, and Ron, friends to this day.  I salute their service.

Soon after my Dad's death I wrote a tribute to him, a recollection which tried to capture his essence and our relationship.  I had called it "An Ordinary Man" as his story is not exceptional, but one of a man who lived his life as best he could, trying to do the right thing.  Of course to me he was anything but "ordinary." 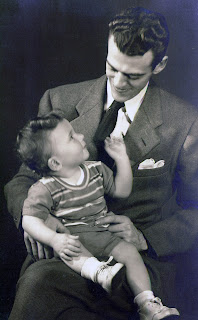 Recently I felt that essay, written so many years before, needed work, and I revised it, not only to be more accurate (the passage of time helped recall details) but with the intention of submitting it to the New York Times Magazine section as a suitable piece for their "Lives" section. But I knew it was unlikely they would publish it as the paper tends to be partial to professional writers or journalists.  And as they have not, I include it here.  It is really the story of how, or why, I did not go into business with him, but I think it is a good depiction of him as well.  So, in loving memory of my Dad, a veteran:

Up Park Avenue we speed to beat the lights from lower Manhattan in the small Ford station wagon with Hagelstein Bros., Commercial Photographers since 1866, 100 Fifth Avenue, NY, NY imprinted on its panels. The Queens Midtown Tunnel awaits us. 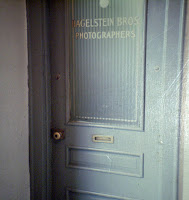 It is a summer in the late 1950s and, once again, I’m working for my father after another high school year. In the back of the wagon I share a small space with props, flood lamps, and background curtains. The hot, midtown air, washed by exhaust fumes and the smoke from my father’s perpetual burning cigarette, surround me.

My father’s brother and partner, my Uncle Phil, occupies the passenger’s seat. They have made this round trip, day-in and day-out since my father returned from WWII. They speak of the city, its problems, the Russians, and politics disagreeing on most matters. Meanwhile I sleepily daydream about where my friends and I will cruise that evening in one of their cars, a 57’ Merc, probably Queens Blvd., winding up at Jahn’s next to the RKO on Lefferts Boulevard.

The family photography business was established right after the Civil War, soon after my great-great grandfather, Carl, emigrated from Cologne, Germany with his brother, settling in New York City.  Their portrait photography business at 142 Bowery flourished in the 19th century.  The 20th century brought a new focus: commercial photography which necessitated moving to a larger studio, better located, at 100 Fifth Avenue on the corner of 15th Street.  There the business remained until the 1980’s, occupying the top floor. 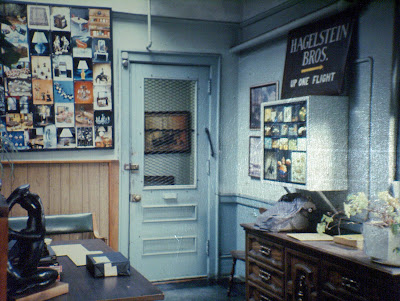 My father took it for granted that I was being groomed for the business, the next generation to carry it on. Uncle Phil was a bachelor and since I was the only one with the name to preserve the tradition, it would naturally fall to me.

This was such an understood, implicit obligation, that nothing of a formal nature such as a college education was needed to foster this direction. Simply, it was my job to learn the business from the bottom up, working first as a messenger on the NY City streets, delivering glossies to clients for salesmen’s samples, or for catalog display at the annual Furniture Show. As a youngster, I roamed NYC by subway and taxi with my deliveries without incident – after all, this was the innocent, placid 50’s.  Eventually, I graduated to photographer’s assistant, adjusting lamp shades under the hot flood lamps so the seams would not show, and, later, as an assistant in the color lab, making prints, dodging negatives of a clients’ tables, lamps, and sofas to minimize any overexposures.

I see my father through the lens of his working life, revealing a personality normally invisible to me. At home he was a more contemplative, private person, crushed by a troubled marriage. My mother expected more, often reminding him of his failures. But strolling down the halls of his photography business he is a transformed person, smiling, extending his hand to a customer, kidding in his usual way. “How’s Geschaft?” he would say.

His office overlooks the reception area and there he, my Uncle, and his two cousins preside over a sandwich and soda delivered from a luncheonette downstairs. I sit, listen, and devour my big greasy burger. They discuss the business among themselves. Osmosis was my mentor.

In spite of the filial duty that prompted me to continue learning the photography business, I inveigled his support to go to college – with the understanding I would major in business. By then I think I knew going to school would be the first step away from the family business, a step, once taken, would not be taken back. The question was how to reveal this to him.

However, as silently was the expectation that I would take over one day, my retreat was equally furtive. We both avoided the topic as I went to college and yet continued to work there during the summers. Once I switched majors from business to the humanities, we both knew the outcome of the change, but still, no discussion. This was territory neither he nor I wanted to visit at the time.

My reasons were instinctively clear to me, in spite of the guilt I often felt. In the studio he was larger than life, the consummate photographer, but he was also provincial in his business thinking. He had bet the future on producing those prints for salesmen, discounting the impact of the developing mass media.  My opinion on the matter would mean little. After all, he was my Dad and I was his kid. So I kept my silence and progressively moved away.

Why he never brought up the subject I will, now, never know, although I suspect he understood I wanted to find my own way in life. Ultimately, I married and found a job in publishing with an office, ironically, only three blocks from his studio. I still occasionally joined him for that greasy burger at his office during those first few years of my publishing career, his greeting me with a smile when I arrived, “so, how’s Geschaft? 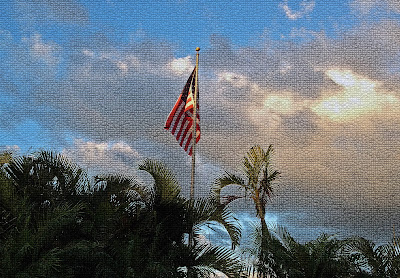 On this Veterans Day I take a moment to remember my father who fought in WW II. He was a Signal Corps photographer, and although that doesn't sound very dangerous, he had his share of close calls, fears, and uncertainties. He did things he never imagined he'd be asked to do or see, such as having to film a German concentration camp as soon as it was liberated witnessing first-hand those demonic atrocities. Or having to go up in gliders to silently land near enemy lines, and, generally, having to be away from his wife (Penny) and young son (me). He rarely talked about those war years, preferring to just put that part of his life into a compartment, locking it and throwing away the key.

My father had some notoriety, appearing on the pages of Stars and Stripes, the venerable newspaper of the armed forces that has been published since the Civil War. My father was filming at enemy lines overlooking the Rhine River, under a German sign reading "Photography Forbidden." 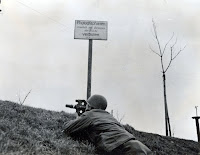 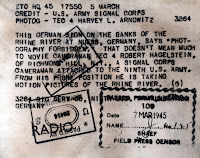 Now that he is long gone I regret not trying to talk to him more about the experience. I have some of his letters that he wrote to my mother and my Uncle and below I quote one of my favorite passages as it is so revealing. Towards the end of the War he wanted to get home so badly. Who could blame him? I'm sure all Veterans, current and past share those feelings.

Here are my father’s hopes and thoughts on Aug. 12, 1945, in a letter to his brother, Phil, from Wiesbaden, Germany:

“As you no doubt already know, I informed my sweetheart [Penny] some very discouraging news – that is being stuck here as [part of the] occupational [force]. On the heels of that letter came the wonderful news that Japan is asking for surrender. As this wasn’t definite as yet, I can’t say that finally war is ended, but I’m sure it’s only a matter of a day or two. 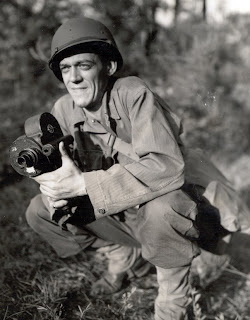 The Atomic bombings, and Russia’s entry into the conflict just overwhelmed the Japanese, especially the Atom smasher, a deadly and destructive thing, which has great future development for the betterment of mankind, but what I fear is some nation to use it for a complete destruction of civilization. I hope that this fear never will materialize.

What I began to say concerning the news [staying here as part of the occupational force], which I hated to tell Penny, is this – the sudden ending of all hostilities can possibly bring me and hundreds of other guys back to homes sooner than is predicted. I’m sure that those who are the law makers at home aren’t going to leave us in these foreign lands against our will – especially as there are millions of other Joes who have never left the good old USA and faced a future of sudden death.

I fought for freedom, freedom for all peoples. Now that we have won victory over the oppressors, haven’t I the right to enjoy that freedom? The Army is composed of civilians. Is it not the democratic way that we all share the fruits of victory, especially those who fought for it and were fortunate enough to be sparred a hideous death?"
. 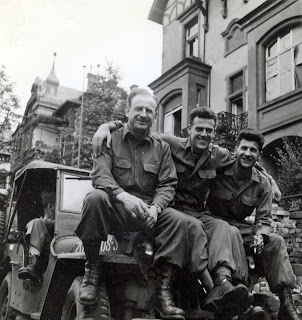