Cruise to Canada and New England

Although we lived in the northeast all of our adult lives before moving to Florida, and still spend

the summers there on our boat, we had never taken our own boat north of Nantucket, so this summer we planned a trip to the Canadian Maritimes, but on a cruise ship, leaving the driving to someone else. And although we had navigated New York harbor on our own boat, there is nothing like leaving New York on a 93,000 ton vessel, where you pass Lady Liberty at eye level and 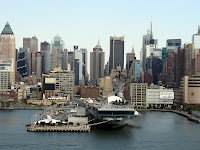 the entire panorama of New York slowly unwinds as you leave the pier at 55th Street and 12th Avenue and make your way towards and under the Verrazano Bridge, barely clearing the bridge 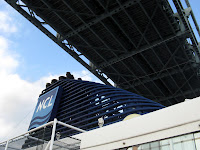 in such a vessel. Passing Ellis Island stirred stories in my memory of my ancestors who were processed there, arriving from Cologne, Germany before the Civil War and afterwards building a photography business on the Bowery in lower Manhattan.

Having departed NY in the late afternoon, we emerged into the open waters of the Atlantic on way to the first port of our

itinerary, Halifax NS. Our departure coincided with the arrival of Hurricane Igor in the Atlantic and although we were no closer at any time than about 1,000 miles, the storm stirred up the seas, resulting in considerable swelling. But for old salts such as ourselves, the 8 to 10 foot seas were very tolerable, particularly in such a large stabilized vessel. I felt sorry for the passengers who were wearing their wristbands and their patches behind their ears to ward off mal de mare, real or imagined. One could easily recognize such people from a slight glaze of fear in their eyes.

This first leg to Halifax took a full day and night from NY and we entered the harbor early in the morning, a special moment for me as several years ago I edited a book, New York to Boston; Travels in the 1840’s, which included selections from Charles Dickens’ American Notes (1842). Halifax was Dickens’ first stop after transiting the Atlantic Ocean on one of the early steamers -- and in January no less. One can understand his relief at arriving in Halifax, writing the following about his Atlantic journey: “Imagine the wind howling, the sea roaring, the rain beating: all in furious array against her. Picture the sky both dark and wild, and the clouds, in fearful sympathy with the waves, making another ocean in the air. Add to all this, the clattering on deck and down below; the tread of hurried feet; the loud hoarse shouts of seamen; 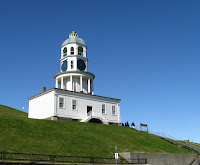 the gurgling in and out of water through the scuppers; with, every now and then, the striking of a heavy sea upon the planks above, with the deep, dead, heavy sound of thunder heard within a vault.”

His ship went aground entering the Halifax Harbor and after being reassured that there was no danger of the ship sinking, or rolling over as the tide was on the rise, Dickens went to bed at 3:00 AM. Upon awakening the next morning, he wrote: “When I had left it over-night, it was dark, foggy, and damp, and there were bleak hills all round us. Now, we were gliding down a smooth, broad stream …the sun shining as on a brilliant April day in England; the land stretched out on either side, streaked with light patches of snow; white wooden houses; people at their doors; telegraphs working; flags hoisted; wharfs appearing; ships; quays crowded with people; distant noises; shouts; men and boys running down steep places towards the pier: all more bright and gay and fresh to our unused eyes than words can paint them.” They finally got off the ship for the first time in fifteen days, Dickens describing Halifax as follows: “I carried away with me a most pleasant impression of the town and its inhabitants, and have preserved it to this hour… The town is built on the side of a hill, the highest point being commanded by a strong fortress, not yet quite finished. Several streets of good breadth and appearance extend from its summit to the water-side, and are intersected by cross streets running parallel with the river…. The day was uncommonly fine; the air bracing 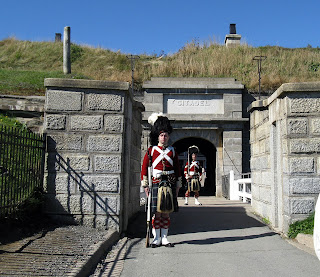 and healthful; the whole aspect of the town cheerful, thriving, and industrious.”

I include Dickens description as remarkably it mirrors our own impression of Halifax, and I could not help thinking of his visit while there. Of course, things are more modern now, and the fort he referred to as being unfinished, The Citadel, was completed in 1856, fourteen years after Dickens’ visit.

It was a clear chilly day with nary a cloud in the sky when we were there, the wind having whipped around from the north after the passage of Hurricane Igor far to the east. We walked the extensive hills of Halifax. In some ways, it reminded us of a small Vancouver, with many ethnic groups, Halifax’s Pier 21 having served as the “gateway to Canada” as did Ellis Island in NY.

Our departure followed Dickens into the Bay of Fundy, but his ship went directly to Boston whereas we were on our way to Saint John, New Brunswick, on the north shore of the Bay of 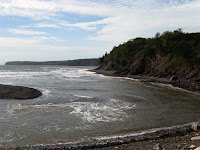 Fundy and at the mouth of the St. John River. The Bay of Fundy has always fascinated me because of its extreme tidal changes, an unthinkable fifty-five feet along with the strong currents that accompany such change. As a boater, I wondered how one would navigate and tie off to fixed docks for such a change (answer: time activity to avoid low tide or just sit on the bottom waiting for the tide to rise). Intent on seeing as much as we could of this phenomenon and the caves gored by tidal action, we wanted to travel parts of the Bay of Fundy trail and therefore we booked a private guide to be driven to all the highlights.

This turned out to be a fascinating part of the trip, not because of the scenery per se, which was

not as memorable as we had hoped (we were there at the wrong tide, closer to high than low) but because of our driver, a woman in her early forties, and her unusual and remarkable life story.

She was born to a French-Canadian father and a mother who is part native Indian and actually was raised on a Reservation. In fact, her Uncle is currently a chief of one of the Micmac tribal villages. Our guide has twelve half brothers and sisters, all fathered by different men! Her mother had problems, too personal to go into detail here. But remarkably, our driver raised many of her half siblings from her early pre-teen years, and her own two sons and a daughter as well, completely on her own. Through much personal sacrifice and hard work, they have become upstanding citizens and she is currently a very proud homeowner and successful in her business, and is reconciled with her parents who rent a room in her house! 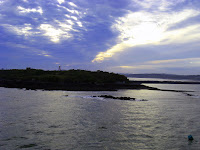 So while we toured and she explained the various sites, we were equally fascinated by this larger than life person, and her perspective on living in St. John, a beautiful part of the world.

From St. John the ship moved on to Bar Harbor, Maine, my friend Emily’s favorite place. 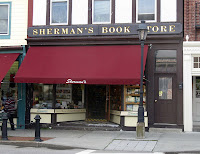 Although our son went to Bates College in Lewiston, and we used to visit him there, regretfully we never found our way to Bar Harbor, a town that reminded us a little of Nantucket. Emily’s “go to destination” in town is Sherman’s Bookstore where she advised Ann to buy, Contentment Cove, a novel written by Miriam Colwell, which although she actually wrote in the 1950’s was published only four years ago. Ann loved the book, finishing it during the rest of the cruise (I was reading Jonathan Franzen’s Freedom) 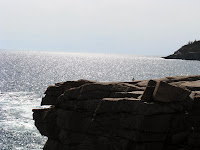 Acadia National Park, with its striking views of the Porcupine Islands and much of Maine’s extensive coastline was a special treat. Before the fire of 1947, Bar Harbor had large, Newport-like “cottages” but most of these were consumed in the fireball that was fed from the Acadia woods by a dry strong wind. Today Bar Harbor’s 4,000 resident population grows ten times that in the summer. One can see why.

From Bar Harbor we cruised overnight to Boston, where we eagerly anticipated seeing our son,

Chris. We decided to meet at The Institute of Contemporary Art where we were treated to highly interesting and imaginative work of Charles LeDray, an exhibition entitled workworkworkworkwork, “consisting of handmade sculptures in

stitched fabric, carved bone, and wheel-thrown clay.” These are all “smaller-than-life formal suits, embroidered patches, ties, and hats, as well as scaled-down chests of drawers, doors, thousands of unique, thimble-sized vessels, and even complex models of the solar system.” The gestalt was to make the viewer’s life feel tiny in the continuum of time and space. This exhibit will tour, so be on the lookout! Afterwards, we had a wonderful lunch overlooking the Boston Harbor. The sun set over Boston as we departed.

The last port was one we had once visited on our own boat, many years before, Newport, RI.

Here is one of the most beautiful, venerable NE seafaring towns, with its “cottages” for the rich and famous. Newport always has a breeze blowing and I remember having to back our boat down a corridor at the old Treadway Inn, currently another hotel, its docks now rearranged for mega vessels, with a crosswind that made the boat almost unmanageable. I think I made a mental note to avoid Newport thereafter, at least on our own boat. Nonetheless, I love the architecture in Newport. 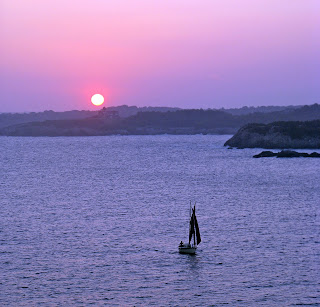 the sunrise. The Williamsburg Bank tower in Brooklyn as well as the Brooklyn and Manhattan bridges marked my return to an area I had spent a good part of my early adult life.

It was strange to see these landmarks from the perspective of the ship, four decades later, almost as if I am now a stowaway from another land.