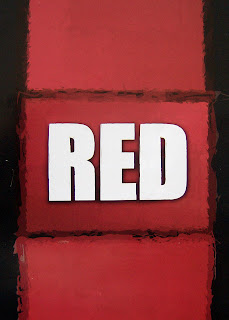 I didn't expect to write this, hoping for merely an enjoyable Friday night at Jupiter's Maltz Theater to see one of our subscription plays, in this case Red. I knew something about the play, that it is about art, the same general subject as portrayed two nights earlier at Dramaworks, in their fine production of The Pitmen Painters.

So I suspected the plays might invite comparison, but I was determined to take a break from "reviewing." But here I am at 5.00 am getting down my thoughts without the benefit of any notes which I usually take during the evenings we're at Dramaworks. Such is the burden of an obsessive compulsive.

Not only the plays invite comparison, the theaters do as well. We've been subscribers to the Maltz since the first day it opened ten years ago, having been awed by it's opening play, one that we thought "set the stage" for what would follow in their future seasons, Anna in the Tropics by Nilo Cruz. Consequently we eagerly bought season tickets that night and have done so every year. If I was writing this blog then, I would have posted something extensive about that Pulitzer Prize winning play, a true story of a cigar factory in Tampa in the late 20s (also based on historical fact) that employed lecturers to read classic literature to the workers who were mostly illiterate but came to appreciate great literature while they were working. Their emotional transformation while listening to Tolstoy's Anna Karenina is nothing short of electric, mesmerizing theatre. And it is a very sensual play with passionate interaction between characters.

Although always impressed by the level of professionalism exhibited by the Maltz since then, we have at times been disappointed by their choice of properties. Each season there would be a plum of a play, perhaps suitable for Dramaworks as well, such as their production of Master Class, Terrence McNally’s Tony prize-winning play about the great soprano, Maria Callas or The Tin Pan Alley Rag, a dramatic depiction of a fictionalized meeting between Irving Berlin and Scott Joplin, or last year's production of the classic Twelve Angry Men. But interspersed are productions that pander to popular taste. If we wanted to be merely "entertained" we could always go to a movie.

Until seeing Red, we were actually thinking of reluctantly cancelling our season's tickets and just going to the few plays we think worth the time to see. But Red reminds us of an obligation to support serious theatre in South Florida, especially after the demise of Florida Stage where our prepaid subscriptions turned into those of an "unsecured creditor "and the recent financial difficulties of the Caldwell (to which we do not have season's tickets but occasionally go).

But as I said, Red invites comparisons to The Pitmen Painters which we had seen just two nights before. The Ashington artists were uneducated, neophytes to art, their artistic egos as fragile as butterflies whereas the ego of the artist in Red, Mark Rothko, fills the stage and the entire auditorium, with some left over for the parking lot. The nature of art is also discussed in The Pitmen Painters but on an elementary level, befitting the nature of their primitive or folk art while art is discussed in its most intellectual and symbolic form in Red befitting the modern impressionistic works of the highly experienced Rothko. It's not that one art is better than the other (and personally, I like the more traditional art of the Ashington group, although appreciate abstraction as well), but it is interesting how these two plays approach a related subject and how the dramatic experience effects us. They challenge us to think about what art means, to us as individuals and to society.

Red is about the real life abstract impressionist Mark Rothko (Mark Zeisler), and the drama springs from his relationship with his young assistant Ken (JD Taylor), fictionalized by the play's author, John Logan. What happens between the time Ken is hired by Rothko who emphasizes that he is an employee only, not his student, not his son, not his patient, to the moment when Ken is finally fired by Rothko is 90 minutes of uninterrupted highly charged drama. Red leaves us stunned and even tearful at the end, a dramatic transformation of two men, the artist and his young assistant. Yes, only a two character play with such power.

And "red" is discussed in its many manifestations, as in different shades of that color, and black overtaking red, Rothko's metaphor of death overtaking life. Meanwhile it connotes something entirely different to Ken who, as a seven year old, witnessed the aftermath of his own parents' murders, saw the dark blood, still sees it and imagines (in his own paintings) what the murderers might have looked like. A perfect element for Rothko to connect with Ken on a human level, but can he, does he?

Rothko is a depressive misanthrope, railing out at others who fail to recognize his greatness and who fail to understand what art really is about while Ken has the buoyant innocence of an aspiring artist, secretly hoping to learn from the master, and to be appreciated by him. Rothko has been engaged by the architect of the Seagram's building, which houses the Four Seasons restaurant to paint their murals. And there is the conflict, art vs. commerce, something Ken the student sees, argues with Rothko to see, but it is not until Rothko himself goes to the Four Seasons for dinner that the realization that he is prostituting his soul sets in. He describes his visit with a misanthropic distain for the other diners, their wealth, their dress, their judgments, their small talk, all the vacuousness we have come to despise about modern society itself.

It is a stunning turn of events on stage, and after two years (in 90 minutes) Ken is fired, hurt, bewildered, demanding to know of the master, why, why, why. At first Rothko stays within his curmudgeonly demeanor, but finally looks at his assistant and painfully says, I am setting you free, to be with people your own age, to experience your own art. Ann and I knew we had just shared one of those special theatrical moments.

The quality of the acting, the stark staging of an industrial warehouse, the lighting which seamlessly highlighted the paintings or the action, was executed with such expertise that the audience could just dwell in the production, experiencing what only live theater can provide. The two roles were so very different, with such diverse demands, that they are hard to compare. JD Taylor perfectly plays the starry-eyed, eager-to-learn, but ultimately disillusioned Ken. Mark Zeisler has the task of playing the Herculean Rothko and has to modulate an almost stream of conscious intellectual banter about the nature of art while screaming invectives about his competitors (cubism before abstract expressionism and then the drip painting of Jackson Pollock and the pop art of Andy Warhol) and his distain about the art "public." Art and the character are almost inseparable, one inhabiting the other. The role's difficulty and how it is portrayed lead to a few discernable moments of hesitation on Zeisler's part, something I find rare on the professional stage, but understandable given the nature of the role and how people really talk.

We usually like to arrive at a theater early enough to read the program, and this was the other odd thing about the evening. The program had no information about the play's author, John Logan (or did I miss it?). This is a brilliant and passionate piece of writing, one that precisely reflects Rothko's inspired work, so I thought this apparent omission very bizarre. Wikipedia to the rescue. Logan is primarily a screenwriter, with such credits as The Aviator, The Gladiator, and Hugo, among others. Not surprising, Red was the 2010 Tony Award winner for Best Play. One hopes he returns to playwriting again.

As I noted, Andrew Cato, Maltz's Artistic Director, is trying to walk a fine line between appealing to everyman (what he calls family theater) and serious theatre. Maltz has the advantage of having a stage suitable for musical productions as well and there, too, it waivers between adult musicals such as its past exceptional productions of Cabaret, Man of La Mancha and Evita, and frothy "fun" musicals, pabulum some South Floridians apparently crave. We wish they would stick more with the former (do we really have to see the Music Man again next year?). While tempted to choose only the plays we want to see, live theater needs support, so we will renew again, hoping for thoughtful productions in the future. Such as Red. See it! 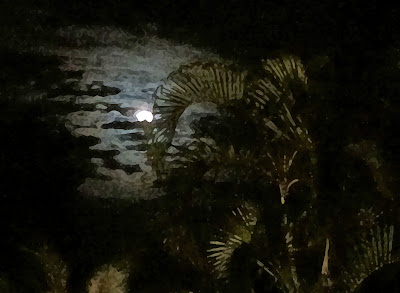 Abstract rendering of a photograph of a South Florida moonrise
Posted by Bob at 8:57 AM