Gorilla in the Room


Finally it comes out, point blank.  No mistake about it, racism in the so called post-racist USA and its possible impact on the election.

One of Mitt Romney’s presidential campaign advisors, John Sununu, in an interview on CNN when asked about Colin Powell’s endorsement of President Obama for a second term, said, “Frankly, when you take a look at Colin Powell, you have to wonder whether that’s an endorsement based on issues or whether he’s got a slightly different reason for preferring President Obama.” When asked to clarify what that issue might be he said “well, I think when you have somebody of your own race that you’re proud of being president of the United States, I applaud Colin for standing with him.”

Does that mean Sununu supports Romney, not based on the issues, but because of race?  It is not too farfetched to wonder why ”according to Reuters/Ipsos polling conducted October 1 to October 7, likely white male voters favored Romney 55.5 percent to 31.9 percent.”

An earlier entry mentioned that I was reading the last of the “Schmidt trilogy” by Louis Begley, the current one being Schmidt Steps Back, published this year but probably written over the two prior years.  I think of Begley as being the intellectual equivalent of John Updike, who coincidently was Begley’s classmate at Harvard, both graduating summa cum laude in 1954.  From there, their careers diverged, Updike becoming a writer and Begley an international lawyer.  But Begley is now a full time writer, and to me, writes with the intellectual ease of his classmate and, like Updike, follows a character in multiple novels over years (Rabbit and Schmidt).

I intend to some more on Begley when I finish the book, but I have to quote something from Schmidt Steps Back which has a direct bearing, on “the gorilla in the room.”  One of the characters in the book,  Mike Mansour, an ultra wealthy and powerful international financier, gives voice to the issue (bear in mind, Begley does not use quotation marks for dialogue in the novel, an idiosyncratic style I’ve become accustomed to so the quotation marks here are mine):  “Then Mr. Mansour took over.  He began to orate, his voice rising as he expounded his theory, which in other versions  he revealed to Schmidt more than once, to the effect that Obama’s presidency, however much he personally wished it to succeed, was doomed. The question is, he insisted, the question is can he make American politicians do his will.  The last Democrat able to accomplish that was LBJ.  He’d grab them by the balls….—and they said, Yes Mr. President, before he’d even begun to squeeze…But Obama is black!  Black in the most racist country in the world.”   Another character reminds Mansour that Obama was just elected by a landslide.  “The question is, the great financier continued, whether it knew what it was doing. I tell you that too many of those who voted for him didn’t have a clear idea.  Now they’re saying the White House is going to be the Black House, and they didn’t sign up for that….Obama has to be such a good guy that his hands and feet are tied.  You watched him debate McCain?....You saw him smirk whenever Obama talked?  Not once, not twice, but every time.  LBJ would have said, Wipe that smirk off your face or I’ll tear your head off.  Barack can’t do that.  You can’t have a black man telling off the Man.  Please, there is no place here for angry black men! Obama has to be polite and make nice, and you know what they say about nice guys – they finish last.”

It will be a close election as the one in 2000 decided by the Supreme Court .... 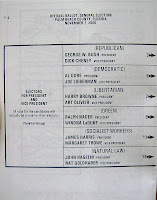