How “Terribly Strange” To Be 70


The always erudite investment manager, Bill Gross, has turned the Big Seven Zero.  As he now observes in his recent missive, A Sense of an Ending, “a 70-year-old reads the obituaries with a self-awareness as opposed to an item of interest.”  He conflates his own end of life angst with the end of a market propped up by unsustainable central bank machinations.  He also cites Julian Barnes’ novel, The Sense of an Ending, which similarly caught my attention, perhaps because Bill and I are about the same age, although I reached the magic 70 mark a couple of years ago, sharing the occasion with my family on a cruise.

Barnes should be the spokesperson for our generation with his non-fiction work Nothing to be Frightened Of required reading.  I’ve already quoted one of the brilliant passages from that book in a previous entry, but it bears repeating: “It is not just pit-gazing that is hard work, but life-grazing.  It is difficult for us to contemplate, fixedly, the possibility, let alone the certainty, that life is a matter of cosmic hazard, its fundamental purpose mere self-perpetuation, that it unfolds in emptiness, that our planet will one day drift in frozen silence, and that the human species, as it has developed in all its frenzied and over-engineered complexity will completely disappear and not be missed, because there is nobody and nothing out there to miss us.  This is what growing up means.  And it is a frightening prospect for a race which has for so long relied upon its own invented gods for explanation and consolation.”

I’ve now had a couple of years to “look back” at the consequences of turning 70.  While philosophically I agree with Barnes, it is the avoidance of despair during the remaining years which is the challenge.  It’s probably why us herd of the retired “keep busy.”  But as much as we try not to think about it, for many of us turning 70 is like throwing on a light switch (or maybe, more aptly, turning it off).  Suddenly, the body rebels at being kept going beyond its normal shelf expiration date.  More parts wear out and medical technology is more than happy to figure out a way to keep us going.  As a friend of ours puts it, “I have body parts on order.”

Unquestionably the worst part of the whole process is watching friends battle unspeakable illnesses or going through invasive surgery to keep the body going, with the attendant weeks or even months of rehabilitation.  As we all joke, it’s better than the alternative. Hey, we're on the right side of the grass!  But with increasing frequency we hear about another friend, a relative, or a high school / college alumnus who has succumbed to the inevitable.

As readers of this blog know, one of the activities I’ve steeped myself in since retiring (and therefore, “keeping busy”) is playing the piano, mostly The Great American Songbook pieces.  I recently came across -- buried in my sheet music – some of the music of Paul Simon written in the 1960s.  During those days, that was the type of music I played, but have long abandoned.  So I found myself playing some again, particularly Old Friends which opens with two beautiful Major 7th chords, A-major-7 (“Old”) and then E-Major-7 (“friends”).

I’m a "serial piano player" and once I attach myself to a song, I play it over and over again, trying different adaptations.  My mind wanders sometimes and, in the case of this song, remembering my thoughts of the lyrics when I used to play it nearly 50 years ago. Today they have a significance quite different than when I was younger, particularly the phrase from the B section of the song, “Can you imagine us/Years from today/Sharing a park bench quietly?/How terribly strange/To be seventy/Old Friends “

The true meaning of lyrics when I played the song back in the 1960s seemed foreign, unthinkable.  My being 70 at the time seemed to be in a one-to-one relationship with eternity.  Eternity has arrived.

So, Bill, welcome to the club!

A Special Day, A Special Woman

Ann, my wife and best friend, is turning 70. Incredible. When we met in our late 20's, I remember listening to the words of the Paul Simon song of our youth, Old Friends, "Can you imagine us years from today, sharing a park bench quietly? / How terribly strange to be 70." Indeed, how terribly strange it seemed to us then, really unthinkable, but that is the curse of youth, a presumed eternity of life.

We were both working then for the same publishing company in New York City, but at the end of the 1960's I accepted a career opportunity in Westport, CT, and worked at that same job until retirement. Meanwhile, we raised a family: our son, and my son from a prior marriage.

Before taking on the responsibility of child-rearing, Ann continued to work in NYC even after we relocated to Westport, my dropping her off at the Westport train station early in the morning on my way to the office and picking her up on the way home. When Ann was pregnant she stopped working and we did what countless couples did, worked on the house, moved to a larger house, raised our family, worked and played hard (particularly on our boat) and, suddenly, the kids were gone and my working days were concluding. The 70's, 80's 90's, and, now, the first decade of 21st century flew by almost stealthily, but with gathering speed.

How does a marriage survive such a long period of time? By being best friends I think. Simply put, we're simpatico. I've watched the birthday milestones, now, of most of Ann's life and in fact had large surprise parties for her 40th and 50th. 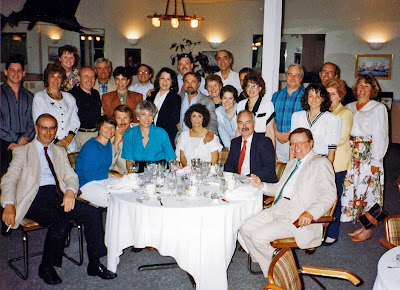 The 50th was particularly special as I wrote a speech which, I thought, really explains her character, and giving a sense of how special she is, and it can be read at the concluding part of this link.

So, another twenty years has gone by and she is now 70 (and I am approaching the same, health willing). Why does it feel like (to us both) we are still kids? Of course our bodies deny that fact as does the mirror, but the mind seems to rule. I still think of her as that youthful, beautiful woman I married, someone who was so very different than I on the one hand, but seemed to share many of my interests.

I've told a lot about those interests since writing this blog, so no need to detail them in this entry. But, over the years, I've scanned many of our photos, and in celebration of Ann's birthday, and her life, I include some here. Happy 70th, Annie! 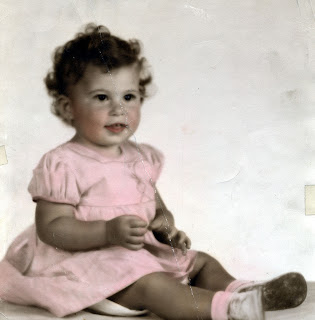 Might as well start near the beginning, actually the earliest picture I have of her at about one year old. That impish glint is already in her eye

We progress to about 1948. Ann loves dancing and in fact studied Flamenco in her early 20s with one of her employees who later relocated to Spain and became (and still is) a renowned expert on the topic, Estela Zatania. Here Ann is being escorted by her friend, Teddy, at her first Georgia Military Academy Ball. There are a number of photos of Ann as a teenager at various military bases in 1958 and 1959 . She helped organize those dances for servicemen during their basic training out of college. 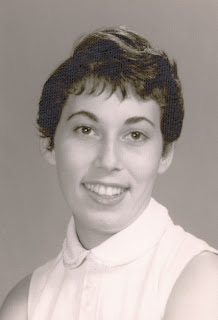 Ann at fourteen, more recognizable as the women she became.

At her "Sweet Sixteen Birthday Party" which she co-hosted with her best friend Judy, and all their friends. Ann's mother, Rose, is sitting behind her alongside Aunt Emma in the white hat. 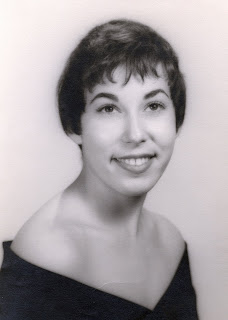 Finally, 1959, graduation from Henry Grady High School. Ann's friends got married or went off to college to get married. Ann packed her bags and moved to NYC within months and never looked back. 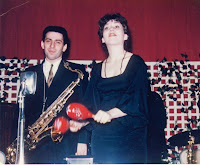 What does one do in NYC other than work during the day and go to school at nights? Naturally, Ann gravitated towards the performing arts, did one off-off Broadway production, Ann taking a bow as the leading lady in "The Moon is Blue," and she played a mean pair of maracas. 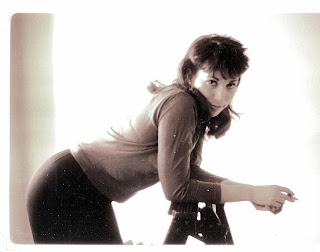 And, if one is going to do theatre, why not mix in a little modeling on the side? Here is a real ham at work. 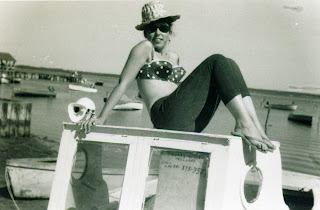 She also hammed it up on a boat somewhere in New England, little knowing that boating was going to figure prominently in her life. 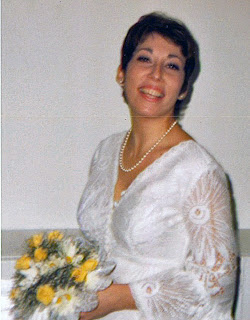 Finally, the big time. Meeting me and getting married! In my speech at her 50th birthday, linked above, I adlibbed that she had "married well" which brought everyone to uproarious laughter as we all know she could have done a lot better. 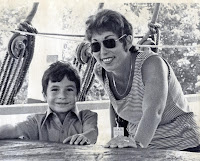 One of the responsibilities Ann took on was to become a step-mother to Chris. I am proud that they have a great relationship to this day and consider themselves spiritual mother and son. 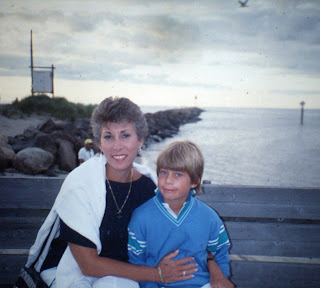 And, then there is our son, Jonathan, who inherited his wanderlust from his mother. Here we are at the Montauk Inlet, probably around 1984, on our way to Block Island.

For several years I had a non-commercial lobster license and we would tend to several lobster pots off of the Norwalk Islands. Ann was a good sport about this and would often remark to people," look at these hands and manicured nails -- they've been in lobster pots!" 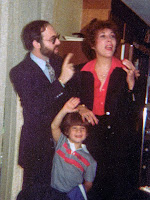 As I said earlier, I was able to pull off big surprise birthday parties for Ann, for her 40th and her 50th, those ten years between being some of the best of our lives. Friends and relatives from far joined in these celebrations.

We've done a lot of travel while married, mine mostly for business, Ann sometimes accompanying me and trying to squeeze in some personal time. Now that I am retired, it is all for pleasure, mostly hers. She is an inveterate traveler, always ready to pack her bag to visit her best friend, Maria, in Sicily or other parts of the world, too numerous to list here. 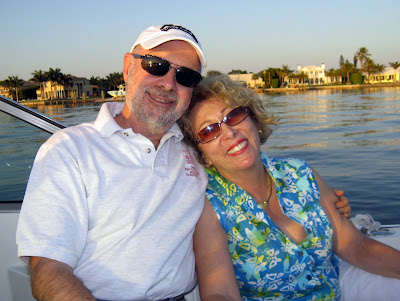 Finally, the most recent picture of us together, on our little boat in Lake Worth at sunset.
Posted by Bob at 5:58 AM