The Novel as Social History


I'm a little late posting this, but must draw attention to a brilliant article by Sam Tanenhaus, the editor of the New York Times Book Review published Nov. 18, right after I had made some similar points regarding the works of Louis Begley, comparing him to the subject of Tanenhaus' article, John Updike as a social historian.

Just to quote a couple of paragraphs from my earlier entry: For me, Begley sort of picks up where Updike left off, following one character and setting that character against the backdrop of the times in which he lives.  Updike updated us every ten years in the Rabbit tetrology while Begley's trilogy is a more compressed time frame.  Nonetheless, there are many similarities, particularly the novel as memoir, a kind of history of our times, and the intellectual level at which both Updike and Begley operate, their erudite prose befitting of their excellent educations.

Rabbit and I shared many commonalities, and now I find myself in Schmidtie's shoes, thinking similar thoughts and of course witnessing the same events.  It makes these novels living breathing documents to me. 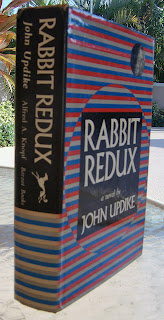 Updike strikes a special synapse in my solar plexus as he wrote not only about my times but about the middle class of my youth.  Although he grew up in (or around) Reading PA, a town different than the middle class town in Queens, NY where I grew up, the people were of the same hard working and church going composition.  I could sense that when during my first job as a production assistant at a New York publishing company I used to regularly go to Arnold's Book Bindery in Reading, PA. Arnold's was the choice binder of short runs of scholarly reprints. (Arnold's founder, Leo Arnold, used to deliver books locally by wheelbarrow!)  It was a town I felt a connection with although I was not from there.  I am sure I would not recognize it today as it has undergone sweeping ethnic changes just as my old Richmond Hill neighborhood has, but that is a good thing in dynamically changing America.

Tanenhaus draws on one of my favorite Updike novels from the Rabbit series, Rabbit Redux, to examine Updike's uncanny ability to record the history of his times in his novels.  Although the link to the entire article is cited above, I also take the liberty of quoting two key paragraphs (my emphasis in bold):

“I don’t think about politics,” Harry Angstrom (nicknamed Rabbit in his high school basketball days) insists during a mealtime quarrel. “That’s one of my Goddam precious American rights.” But he becomes apoplectic when the topic is the Vietnam War, which he supports with a worshipper’s faith. “America is beyond power, it acts as in a dream, as a face of God,” he believes. “Wherever America is, there is freedom, and wherever America is not, madness rules with chains, darkness strangles millions.” He defiantly puts a flag decal on his car, as potent a symbol to him as the flag the Apollo 11 astronauts plant on the moon.

The moon landing is replayed in the pages of “Rabbit Redux” among the flooding images of the nightly news: “Vietnam death count, race riots probably somewhere.” Updike doesn’t simply record all these facts. He elevates them through a kind of social realist poetry, what John Dos Passos might have written if he had the help of T. S. Eliot or Wallace Stevens: “Men emerge pale from the little printing plant at four sharp, ghosts for an instant, blinking, until the outdoor light overcomes the look of constant indoor light clinging to them,” the novel begins, Updike’s celebrated pointillism refreshing a moribund cityscape: “The row houses differentiated by speckled bastard sidings and the hopeful small porches with their jigsaw brackets and gray milk-bottle boxes and the sooty ginkgo trees and the baking curbside cars.” Harry, one of the lumpen pale men, works as a linotypist at Verity Press at a time when Verity and all the moral verities that undergird Rust Belt America seem to be corroding.

Tanenhaus makes his case so poignantly and persuasively.  These were our times and no historian can capture its Zeitgeist better than our some of our novelists, Updike having been on the cutting edge.